Today I am delighted to welcome my friends, Joan and Stephanie, whom I met thanks to Sharon Kay Penman’s wonderful Angevin trilogy. The ladies were most kind to share with us their ideas concerning Ms. Penman’s latest novel, Lionheart, in which Henry the Young King’s illustrious younger brother Richard Couer-de-Lion emerges ‘flesh and bone’, the true man behind the myth, even more irresistible than the legend has it. I do hope that Henry is not going to turn in his grave because of the text devoted entirely to his younger brother (of whom, it is well known, he had always been jealous) and posted here, in his own realm. The next texts are going to be entirely Henry the Young King-centric, I promise. How could they not? After all, February is the month when we celebrate his birthday.

Now let’s listen to the two completely distinctive voices ringing true and authentic in their admiration of the lionhearted king and a certain American novelist who gloriously brought him back to life. Over to you, Joan and Stephanie… 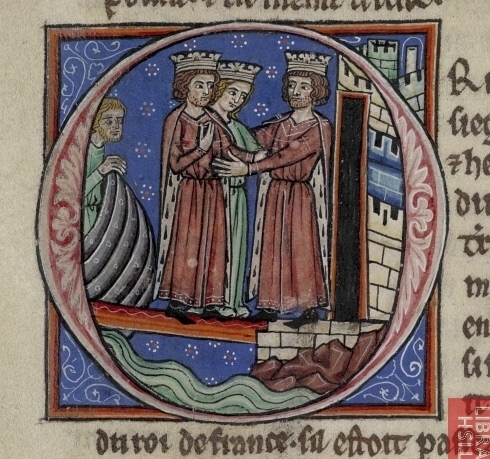 Richard I and his sister Joanna meeting Philip Augustus

A year ago I unwittingly picked up a copy of Sharon Kay Penman's Here Be Dragons and had no idea I would later see this as a serendipitous moment.  I've since become a loyal fan, hooked on the Middle Ages, and have literally taken up residence in 's medieval past. Lionheart, great tribute to Richard I, is my latest adventure.

It boggles the mind when reading a novel with subject matter of such magnitude, to experience an easy rhythm and flow from one sentence to the next, page after page, till the book is done.  The mastery required to accomplish this is beyond brilliant.  This literal feast of characters, relationships, events, political and religious ideologies, spanning countries and kingdoms is meticulously laid out so that we can just sit back and enjoy the ride.

It occurred to me that the Prologue and Author's Note stand as two revealing bookends.....the first offers a glimpse of the dramatic flair of this "storyteller extraordinaire"....the latter, re-affirming what we already know of a conscientious mind staying true to impeccably researched history.

Ultimately, there's simply the pure pleasure of gorgeous writing, always brilliant, often poetic, with startling imagery and scenes that leave us breathless! Pair this with medieval figures brought intimately within reach, Richard foremost, and we are well into another great adventure.

Lionheart begins on this intimate note as we reunite with Richard's two favorite women, his sister and mother.  What a joy to meet Joanna again!  My heart went out to the precocious child in "Devil's Brood" and now she's all grown up; sophisticated, clever, beautiful, and Queen of Sicily.

Richard's mother, the indomitable Eleanor of Aquitaine soon joins her, having journeyed with the young Princess, Berenguela, across the , to present her son with his bride-to-be. We mischievously play voyeur to those first sweet moments between the betrothed, amused with Richard's wooing style, and come away assured that he'll watch over his "little dove" as she and Joanna accompany him to the .  Very apropos, before setting off for this holiest of places, is the baptism, albeit "by fire" that Berenguela will be forced to undergo.

The "womens' voices" in these earlier chapters offer interesting insights into life and marriage for highborn females in the Middle Ages, and I particularly enjoyed Eleanor's introspection, questioning why wisdom "seemed to come only with age".   I often wonder if  "Non, je ne regrette rien" was her final dictum on an extraodinary life lived uncommonly long for the times. Quiet reflections before we're catapulted into the vigorous male domain of battle cries, campaigns, and crusading.

The 3rd Crusade becomes very real, very quickly; certainly in all the grandiosity and awe of a Holy War, but even more so in the day-to-day.  We learn there's much more to Richard than reckless battlefield genius seeking self-glory.  He's a soldier who deals squarely with his men and a loved and trusted friend endlessly struggling to keep it all together against near-impossible odds.....the biggest impediment (with devastating consequences) the internecine rivalries; Philippe of France at the helm.  Richard is lodestar to his men and enigma to Saladin, these two courageous warriors sharing the kind of mutual admiration and respect that great friendships are made of......if only.

Throughout all this, our imaginations are jolted with scenes that feel as epic today as they would have then.....Richard's great fleet coming into harbor;  the encampment outside Acre,  and massive military movement to , the Saracens' supply caravan (try getting your head around 4000 camels!!...for starters).  And the scene that leaves us misty-eyed and all goosebumps, Richard's first vision of "shimmering in a golden haze of heat". Ultimately, on this foreign soil, we begin to know and understand the real Lionheart, Commander King, "gallant, glorious, and quite mad". 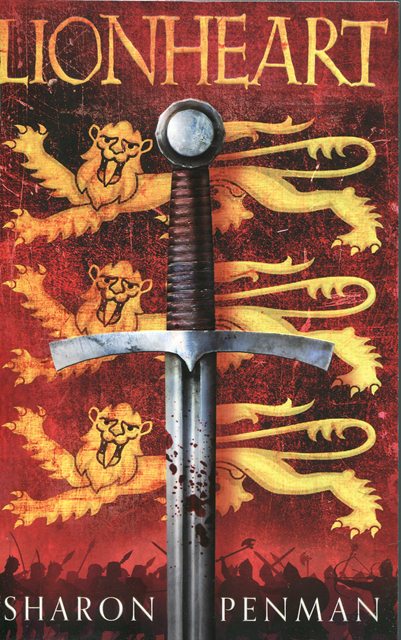 Each and every book written by Sharon Kay Penman has been a delight to read, but more than that each has also served another important role in my life- that of history teacher. When I came upon my first Penman book many years ago, I knew I was interested in history, but I had never studied up close the eras about which her books were based. Needless to say I became hooked and have never looked back.

Within her body of work, each book has served a unique role in my education and enjoyment, but there is one category to which only two books reside. Only The Sunne in Splendour and Lionheart completely and inalterably reset my opinion from a person from history. The Sunne in Splendour changed my outlook on Richard III from the evil hunchback portrayed in Shakespeare’s play of the same name to a living breathing human with flaws and foibles but also one who had a heart, hopes and dreams like the rest of us. In like manner, Lionheart transformed Richard I , better known as Coeur-de-Lion or Lionheart  from a spoiled, self-centered, egotistical patrician into a competent, compassionate and connected leader. Admittedly I started Lionheart  being indifferent to Richard but grudgingly had to admit, chapter by chapter, that he was growing on me so that by the end he had endeared himself to me in a very transformational way.

Each and every character in Lionheart is classic Penman, guilty of luring you into their world where you see them as more than just figures from history, but living, breathing humans who would be easily capable of walking in and out of our lives today. Simultaneously and somewhat magically (and this is the brilliance of the author’s skill as a novelist) however, these characters would never be mistaken for who and what they really were- men and women from Western Europe living  in the early medieval era withy world views that reflect this fact. There are not many authors who have been able to make me feel so deeply connected to the characters in a story the way Ms. Penman does. Be prepared for some powerful emotions to be evoked in this one!

Immediately upon finishing the book, I posted my thoughts about Lionheart on Facebook. Here is what I said in its unaltered form, and straight out of the intoxicated stupor I inevitably find myself after finishing a wonderful book:

“Finished. What a ride! I think Lionheart is my favorite of the ‘Angevin series’ because it surprised me more than any of the other books and changed many of my views. I did not expect to have my opinion of Richard changed nearly this much. It sounds so trite to to day the book is full of dimension, but I don’t know any other way to put it. When others managed to portray the same events in 2D, has managed to go somewhere between 3D and 4D. states in her A.N. that a friend of hers said, ‘There was a reason Richard was Eleanor’s favourite.’ I can see it now. Thank you, . Brilliant! Absolutely brilliant!

The Sunne and Here Be Dragons series are still topping the list of favourites, but each of these books is appealing to me for vastly different reasons. Lionheart did not have the same gut-wrenching pain as The Sunne and Here Be Dragons, but it was full of so many other things. I could quote ’s entire Author’s Note and it would basically say it all for me. The colourful details, the better-than-Hollywood events, the complexity of emotions surrounding a certain ‘massacre’ between political need and personal disgust at it. Each little detail was like a dot of paint on a canvas. Combine those dots of light with the complexity of Richard’s fully developed personality as seen in a way I’ve never seen it before and you have a very compelling painting. I spent most of Devil’s Brood being very confused by Richard and wanting to thwack Henry upside the head. Lionheart was a lightbulb moment for me regarding Richard. On a  completely different note, my mind was swimming from the overwhelming amounts of research that had to do. Her list of references was astounding. I always tell everyone she is my favorite novelist, but she is also a historian of the highest order!”

Thank you ladies for your wonderful reviews. I hope that thanks to them many of the Young King’s readers will soon discover the sheer pleasure of spending time in Sharon Kay Penman’s realm. Let me say after Stephanie: “I always tell everyone she is my favourite novelist, but also a historian of the highest order!”