"All Those Who Saw You..." - Henry the Young King in the Tournament World

Henry the Young King was first and foremost the champion and patron of the tournaments. And although most of the contemporary chroniclers were unanimous in finding it his unforgivable sin, he won his fame rushing all over France and participating in virtually all possible meetings. As David Crouch underlines “… the career of Henry, the eldest son of King Henry II of England, cannot be understood unless you fully appreciate how he made the international tournament circuit his very own… [because] the tournament was not just an expensive amusement. Everyone who was anyone in the western aristocracies took to the fields of northern France…” (Tournament, p.21) 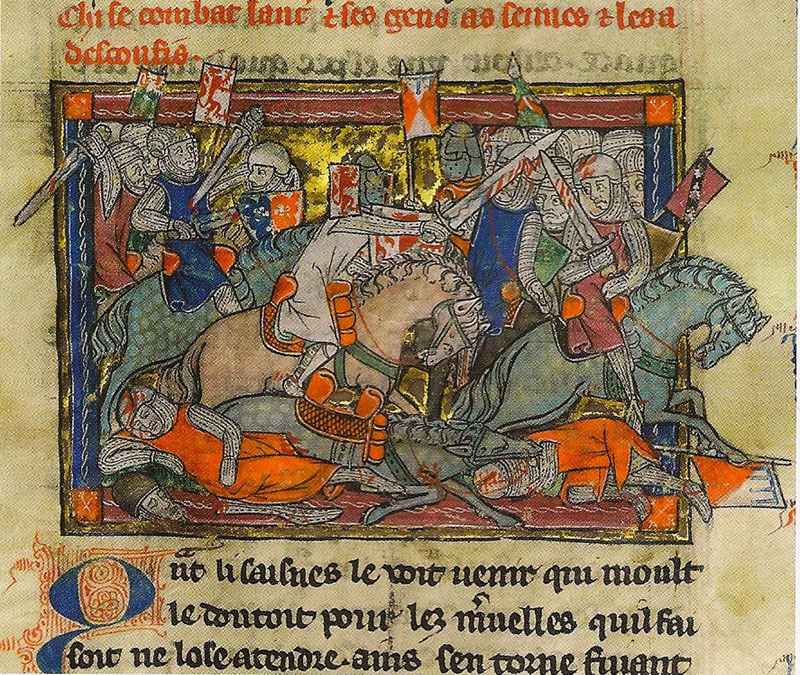 Although there were single voices admitting that tournaments arose "not from animosities but solely for training and the display of prowess” (William of Newburgh ) the Church thought otherwise and was against such military contents, in which "knights waste away their patrimony, their efforts and even their life and soul, simply out of greed for empty praise and popular reputation” (Ralph Niger). This outlook prevailed of course and cast a shadow on Henry's life. The life too short to assess it properly, for before Henry had chance to prove himself worthy of his royal title his life was cut short in the flower of his youth.

The 12th century saw the rise of tournament as one of the main features of aristocratic life. One reason the aristocrates and knights were fascinated by the tournament was because they could parade their skills and thus win fame. The other was the sheer joy of participating. Of course they could also reap profit on it, especially landless knights such as William Marshal. Theologian and canon of Cirencester Alexander Nequam gives yet one more reason for organising and participating in that knightly game, namely that 'they [the knights] engage seriously in war games and occupy themselves in the image of war, in order to becomemore adept in military conflict". However, he did express his disapproval, too, writing that knights "desire to barter their lives for praise and, careless of their own souls, expose themselves to mortal danger in pursuit of vainglorious reputation". Even if that was Henry the Young King's chief motif, and he indeed sought the "vainglorious reputation' we understand why he was doing that. Bieng king only in name, he had to find some other way to win fame. Often accused of "playing at war” and participating in "mock battles”, he, as most of the young aristocrats of the 12th century, found participating in tournaments a way to make himself a "man of account”. When he was forced to spend a year in England at his father's side, learning the bisuness of kingship, he did not try to hide his impatience and discontent. He was to say:

"It should be a source of much harm to me to stay idle for so long, and I am extremely vexed by it. I am no bird to be mewed up; a young man who does not travel around could never aspire to any worthwhile thing, and he should be regarded as of no account” (The History of William Marshal)


Note what the Young King takes for "idleness”. Do not forget that taking part in tournaments was the matter of views and attitude of the entire generation of the young aristocracy, not only the Young King's fancy.

Under the year 1179* the chronicler Ralph of Diceto noted:

Young King Henry, the king's son, left England and passed three years in tournaments, spending a lot of money. While he was rushing around all France he put aside the royal majesty and was transformed from a king into a knight, carrying off victory in various meetings. His popularity made him famous...

In Diceto's words the Young King was occupied with "knightly matters until no glory was lacking to him", but what's even more interesting and surprising, according to him the old king "was happier counting up and admiring his [Henry's] victories", which stands in stark contrast to what historians usually say about Henry II's attitude towards tournamnets, namely that, just like Louis VI of France (1108-1137) earlier in the century, he regarded them as a waste of time and money, and serious threat to public order.

Three years in tournaments! Henry, accompanied by William Marshal and his other household knights visited all the most popular sites where the knights from all over Europe met to compete and win fame in "mock" battles. If truth be told, those "mock" battles were in fact dangerous encounters, fought "for real", in which the need to present their skills often got the better of the knights and their common sense. They sometimes received serious injuries or even got killed while taking part in them, as was the case with Henry's younger brother Geoffrey, Duke of Brittany (1158-1186) or with William Marshal's son Gilbert, Earl of Pembroke (1194-1241).

The most popular sites were the site on the border of Champagne, between Lagny-sur-Marne and Torcy, east of Paris, on the east bank of the River Marne, part of it being now occupied by Disneyland Paris; the great field between Ressons-sur-Matz and Gournay-sur-Aronde [Ressons- Gournay], Picardy, c.15 km north west of Compiegne;  the flats between Anet and Sorel-Moussel [Anet-Sorel], on the border of Normandy. Henry the Young King and the knights under his banner visited them all. It took them some time to win their first victories, but when they did they were unsurpassed. At Lagny-sur-Marne in the opening days of November 1179, for example, where in the heat of "battle" the Young King lost his helmet, but still outshone all the other participants,,who gathered to celebrate the coronation of his brother-in-law, Philippe II Capet [Auguste]. The sum Henry spent to pay off the knights under his banner on the occasion was stuggering: every knight in his service received twenty shillings a day for each man he had with him and thanks to the History of William Marshal we know that  “there were at least two hundred and more … who lived off the purse of the young King and were knights of his”.

In Elizabeth Chadwick's novel The Greatest Knight, her Henry, taking part in one of the tournaments, says: "I love this life!". Perhaps it really was as simple as that, but I do believe that a young, vigorous man with no opportunity to spend his boundless energy elsewhere - especially if his father refused to share responsibilty and power with him - via tournament could find a way to leave a mark on the world he lived in. How indelible this mark had been we can learn from a planh composed by Bertran de Born shortly after Henry's untimely death:

… all those, who saw you, Bretons and Irishmen, Englishmen and Normans, Aquitainians and Gascons, should be sad… And Poitou suffers, and Maine, and Tours. As far as Compiegne let France weep without ceasing, and Flanders from Ghent as far as Wissant. Even the Germans weep!... When the Lorraines and the Brabancons go tourneying, they will mourn because they don’t see you!

Incredible, isn't it? Henry's untimely death came as a shock and left his fellow knights and all levels of society grief stricken. Count Philip of Flanders, the Young King's relative and friend and himself a great patron of tournaments, voiced the doubts that Henry's "young knights" must have harboured at the time: "Now those who are poor young knights will have to go looking for their daily bread. There will be nobody again prepared to give them horses, arms, and money, as this man gladly gave them" (The History of William Marshal). According to the author of the History of William Marshal**, 1183 was a turning point in the history of tournament. Never again knightly skills and display were to reach higher level than in Henry's lifetime. Nor no later patron as generous, open-handed and charismatic as Henry was to be found.William Marshal and his sons, from whom the author of the Histoire must have heard about the Young King's tournament exploits, were not the only ones to claim that the golden age of tournament was over when Henry died. His former chaplain, Gervase of Tilbury, said that Henry's death "was the end of everything knightly". Writing shortly after Henry's untimely passing, Bertran de Born sensed it, too:

... You were indeed the guide and father of youth. And hauberks and swords, and beautiful buckram, helmets and gonfalons, doublets, and lappets and joy and love have nobody to maintain them or to bring them back. They will follow you; like all mighty honorable deeds they will disappear with you.

* Henry embarked for Normandy on 19 April 1176, after having spent a year with his father in England. He stayed three years on the Continent only to return in February 1179 (just in time to celebrate his 24th birthday).

** The History of William Marshal was commissioned after William's death by his eldest son and is a treasure chest full of information not only about William himself, but also about his overlord, Henry the Young King

Otia Imperialia by Gervase of Tilbury. Fragments in “On the Instruction of a Prince: the Upbringing of Henry, the Young King” by Matthew Strickland in Henry II: New Interpretations. Ed. Christopher Harper-Bill and Nicholas Vincent. Woodbridge: Boydell Press, 2007

Images of History by Ralph of Diceto in The Plantagenet Chronicles ed. by Dr Elizabeth Hallam. Editions, 2002.

England Under The Norman and Angevin Kings 1075-1225 by Robert Bartlett, Clarendon Press 2000.