‘The King of Scotland was brave, wonderful and bold,
Before Alnwick he stood unarmed.
I do not relate a fable as one who has heard-say,
But as one who was there, and I myself saw it.
When these had once cried the war-signal of Vesci,
And “Glanvile, knights!” and “Baliol!” likewise,
Odinel de Humfreville raised a cry of his own,
And this of Estuteville, a bold knight.
Then knew king William that he was nearly betrayed!’

Wrote Jordan Fantosme in his Chronicle of the War between the English and the Scots in 1173 and 1174. Having been, as he claimed, the eyewitness to the event, must have also seen what happened next since he described it in detail. William I of (known to posterity as William the Lion), realizing his predicament, hastily put on his armour and rushed at the head of the small force towards the English. The bellicose grandson of David I might have succeeded in his bold attack, had his horse not been killed under him. William, pinned helplessly to the ground by the weight of the dead animal, humiliated beyond measure, was forced to surrender to Ranulf Glanville. What could not have known was that at the very hour the capture of William occurred, Henry II was hearing mass at Thomas Becket’s tomb, asking the Saint’s for intervention on his behalf. As for the king of the Scots, further humiliation followed for he was escorted south to with his legs shackled beneath the belly of his horse. 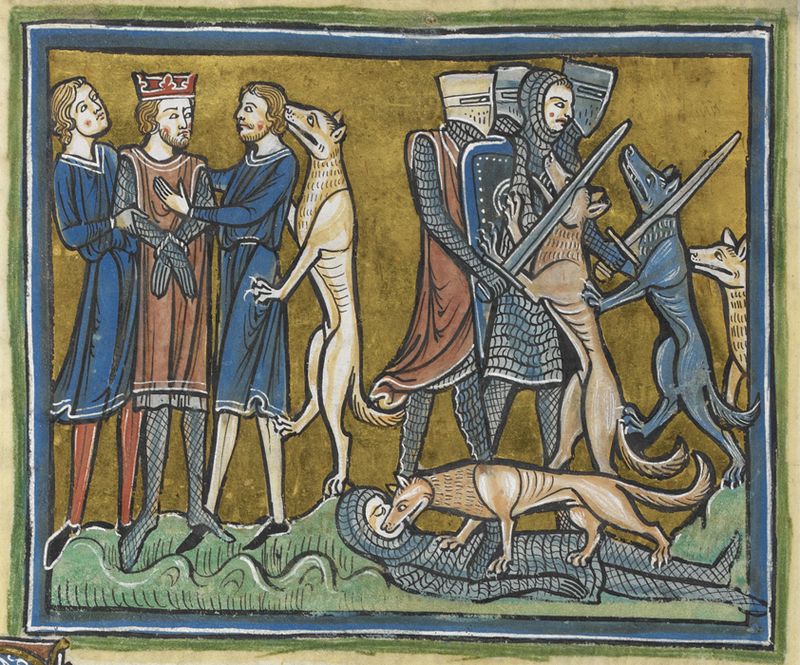 In a far-away Gravelines, Flanders, waiting for a weather to change and for the propitious winds to take him across the Channel, Henry the Young King did not know that with the capture of his chief ally before the walls of Alnwick, the rebellion against his father in England  had been already doomed.

It seems that the seeds of what was to become known as the Great Rebellion [or the Great Revolt] of 1173-74 had been sown already in 1170 by Henry II himself. That very year he had had his eldest surviving son [our Henry] crowned king-associate of . The move that might have proved fully successful- as in the case of the continental rulers- had it not been Henry II’s own stubbornness in refusing to share power with his son. With the passage of time the Young King had been growing increasingly dissatisfied with the emptiness of his title. He had been not only king of , but also Duke of Normandy, Count of Anjou, Maine and . All empty titles, as it had turned out, bestowed upon him by his father with no corresponding power and responsibility. Several times had the Young King demanded what he had thought rightfully his, but each time he had been refused. What had seemed the proverbial last straw had taken place in the opening months of 1173. Henry II had summoned his eldest son to to take part in the meeting with Humbert, Count of Maurienne at Montferrand-le-Fort on 2 February. The conference had been held to discuss the marriage of Prince John and Humbert’s daughter. The Count had asked about John’s share in Henry II’s domains. The King suggested the three castles: Chinon, Mirebeau and Loudun as John’s dower all situated in , a county assigned to his eldest son. Despite Henry the Young King’s loud protests and refusal to accept the terms introduced by his father, the settlement had been reached. To add injury to insult, the old king had dismissed several of the Young King’s intimates who seemed to be exerting a bad influence on him. In consequence, Hasculf de St Hilary and other young knights were forced to leave the Young King’s court. In the aftermath of the events described above, young Henry’s situation had even worsened. He had been held under house arrest. No wonder that the young man had used the first opportunity to escape and seek refuge at his father-in-law’s court. He had been followed by his two younger brothers, Richard and Geoffrey and backed up by his mother, Eleanor of Aquitaine, Louis VII of France, William I of , Counts of Flanders, and , as well as rebels in , and . Henry II managed to emerge victorious against this coalition partly due to the capture of Queen Eleanor at an early stage in the war, partly because the rebels seemed to lack any central base and strong leadership, and partly because, being the richest king in western Europe, Henry II could afford to hire mercenaries on a scale which his enemies could not.

William I’s defeat outside the walls of Alnwick proved to be a decesive factor in quenching the fires of rebellion in . Being Henry the Young King’s chief ally, his capture proved disastrous not only for the rebels’ cause but also for the future of herself. “The chronicles are of one voice on the cause and effect of what took place at Canterbury and Alnwick in July Thomas K. Keefe points out in his “Henry II’s Visits to Thomas Becket’s tomb”. ’s intervention made it clear, for both the royalists and the rebels, that the Almighty chose to favour the old king’s cause. Henry thoroughly suppressed the uprising and utterly defeated the coalition of forces arrayed against him. But how did William I ever get involved in a project that proved so disastrous for him and his countrymen? To learn the details read my text on Devid I’s bellicose grandson here.

The king had entered his own chamber
When the messenger came; he had gone through
Much fatigue:
He had neither drunk nor eaten for three days
Of the week,
Nor slept a wink on account of the certain news,
But by day and night fatigues himself with journeying.
He has acted very wisely, he will have a good gift.
The king was leaning on his elbow and slept a little…
When the messenger came to the door and gently called.
And says the chamberlain: “Who are you there?”
‘I am a messenger, friend; … Lord Ranulf Glanville sent me here
In order to speak with the king, for great need ha has of it.’
…
‘The king is asleep: you must withdraw.’
Whilst they are speaking the king has awaked…
‘Who is that? Can you tell me?’
‘Sire,’ said the chamberlain, ‘you shall know directly.
‘It is a messenger from the north, very well you know him.
‘A man of Ranulf Glanville’s: his name
Is Brien.’
‘By my faith!’, said the king, ‘now am I very uneasy:
‘He is in need of aid, let him come in here.’
The messenger, who was very well bred, entered,
And saluted the king, as you may shortly hear:
‘Sire king, may God who dwells in
Trinity save you,
‘Your person first and then all your
Intimate friends!’
‘Brien,’ said the king, ‘what news do you bring?
‘Has the king of entered ?
‘Has been seized, and the
Fortifications?
‘Odinel of Umfravile been taken or driven away,
‘And all my barons ousted from their estates?
‘Messenger, by thy faith! Tell me the truth.’…
‘Sire.” So said the messenger, ‘hear me a little.
‘Your barons of the north are right good people.
‘On behalf of my lord kindly listen to me,
…
‘The king of is taken and all his barons.’
‘Is king of taken? Tell me the truth.’
‘Yes sire, by my faith! On a cross may I be crucified.
‘Or hanged by a rope, or burnt on a great pile,
If tomorrow, before noon, all be not confirmed.’
‘Then,’ says King Henry, ‘God be thanked for it,
‘And Saint Thomas the Martyr and all the saints of God!’

Chronicle of the War Between the English and the Scots in 1173 and 1174 by Jordan Fantosme translated into English by Francisque Michel, Internet Archive of the Open Library