Montlouis and Other September Anniversaries

On 30 September 1174 a conference at Mountlouis, between Tours and Amboise brought the Great Revolt to an end. The victoriuos Henry II opened the meeting probably the day before, Michaelmas being one of the traditional days for peacemaking in the medieval calendar. Henry the Young King and his younger brothers had no other choice but to accept their father’s terms. The young Henry received two castles in Normandy and £ 15,000 in Angevin currency per annum, but he was to allow his youngest brother John to have Nottingham, Marlborough, and estates in Normandy and Anjou to the value of £ 2,000 annually, plus five castles. Richard received two castles and half the revenues of Poitou, and Geoffrey received half the inheritance of his future wife, Constance, the heiress to Brittany. A general amnesty was granted, with the noble exceptions of William I of Scotland, the earls of Chester and Leicester, and a Breton lord Ralph de Fourages.
Here are other important September anniversaries:
August/September 1197. As the summer of 1197 slipped into autumn, the one time queen of Henry the Young King, Marguerite, aged thirty-nine, slipped into death. She was in the Holy Land at the time, having undertaken a pilgrimage- always a perilous journey- after her second husband, Bela III of Hungary’s death. A wife throughout the greater part of her life- she had been wed to five-year-old Henry at the tender age of two- she was buried alone in the cathedral of Tyre, far from both Rouen and Szekesfehervar, the resting places of her husbands.

3 September 1189. After landing at Portsmouth on 13 August, Richard, the younger brother of Henry the Young King, was crowned king of England “on the third of September, being Sunday, the feast of the ordination of Pope St Gregory”. Following the tradition, the ceremony- always an elaborate affair, consisting of prayers and rites- took place in Westminster Abbey. It was described by Roger of Howden, whose account became the first full and detailed description of a coronation from this period.

4/5 September 1201. Henry the Young king’s sister-in-law, Constance of Brittany died. By no means a meek and ordinary woman, Constance, the daughter of Conan IV and Margaret of Huntigdon, was acknowledged as heiress of Brittany in 1166 and began to exercise her authority in 1181 upon her marriage to Geoffrey, Henry the Young King’s younger brother. She had three children by Geoffrey (Eleanor, Matilda and Arthur) and two daughters (Alice and Catherine) by her third husband Guy de Thouars. While still married to Geoffrey, Constance entered her inheritance of the honour of Richmond (1183/4) and the county of Nantes (1185/6). When Geoffrey died in 1186 the Duchess was able to rule on her own for the first time in her ducal career. It would not last, though, for two years later Henry II married her to Ranulf, earl of Chester. Between 1196 and 1199 their unhappy marriage was annulled, and she married for the third time. Throughout her reign, Constance followed her late husband, Geoffrey‘s policy and advised her son towards a French alliance. Arthur was recognized by Philip II as count of Anjou, Maine and Poitou, in exchange for swearing fealty to Phillip II and consequently becoming a direct vassal of France.

5 September 1101. A disastrous day for Henry the Young King’s famous (or infamous) great-grandfather, Duke William IX ‘Troubadour’ of Aquitaine. On this day the Turks annihilated his entire army near the town of Heraclea in Asia Minor. William managed to flee with a few survivors. Every cloud has a silver lining, though, and after his defeat William found asylum at the court of Antioch where he familiarized himself with the exotic Moorish songs that were to have such a great impact on his own poetry. 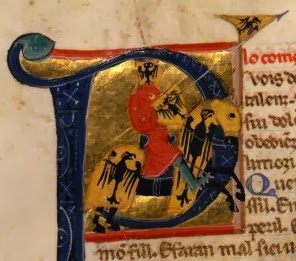 William IX of Aquitaine from a 13th-century chansonnier (via Wikipedia)
5 September 1186. William I of Scotland, the one time chief ally of Henry the Young King in the latter’s rebellion against his father, married Ermengarde de Beaumont, the daughter of the lesser nobleman from Maine, a union arranged for William by Henry II.. The English king paid for wedding celebrations at Woodstock, and returned two of William’s castles taken from him after the unfortunate Great Revolt of 1173-74.
7 September 1151. Henry the Young King’s paternal grandfather, Geoffrey le Bel of Anjou died suddenly at the Chateau-du-Loir, in the Pays de la Loire region of France, three years before his son became king of England. He was buried in the church of St Julien at Le Mans. Best known as the father of future Henry II and founder of the Plantagenet dynasty, Geoffrey had become the count of Anjou upon his father, Fulk V’s departure to the Holy Land in 1128.

8 September 1157. Henry the Young King was two years old when his brother Richard was born at Oxford, supposedly in the royal palace of Beaumont. Richard went down in history as a crusader king and military genius, far surpassing his elder brother, who had never been given a chance to rule on his own and prove himself the way Richard actually did. Bertran de Born, lord of Autafort and famous troubadour, who knew all the English princes and nicknamed each of them accordingly, called Richard ‘Yea and Nay’, not because the Duke was a fickle, unstable man, but ‘because his words were few and to the point’.

10 September 1167. Henry the young King’s paternal grandmother died at the Abbaye de Notre-Dame de Prés, near Rouen and was buried at the Abbaye du Bec. The monks, following their benefactress’s wish, interred her body before the altar of the Virgin Mary. According to Stephen of Rouen, one of the monks, when she died the flower of the meadow (Fr.le pré) withered and a star fell. It was the first time when Empress Matilda was compared to a flower. Usually she was described in quite different words, such as ‘haughty, hard, inflexible and lacking feminine qualities’. Her epitaph in the Rouen Cathedral (where her remains were moved from Bec) reads, “Great by birth, greater by marriage, greatest in her offspring, here lies Matilda, the daughter, wife and mother of Henry”.

10 September 1197. Henry the Young King’s nephew and namesake, Henry, count of Champagne [the eldest son of Countess Marie (Young Henry’s half-sister) and Henry I the Liberal of Champagne] died suddenly at Acre in a most peculiar accident, falling from a window of his palace. He was thirty-one. Seven years before, filled with crusading zeal, he set off at the head of a large contignent of barons and knights on the Third Crusade. On 5 May 1192 Henry married Isabelle, daughter of King Amaury I of Jerusalem and widow of Conrad of Montferat. Henry refused the title of king, styling himself ‘lord of the kingdom of Jerusalem’ and to the very end ‘count of Champagne’.

14 September 1141. A bad day for Henry the Young King’s grandmother, Empress Matilda. During her desperate escape from Winchester, her half-brother, Robert of Gloucester, in a successful try to cover the fleeing party, was captured by Queen Matilda [of Boulogne] forces uder William of Ypres. It was a severe blow, for Robert was the empress's most staunch and loyal supporter and the leader of her forces. He was released later in the year, but only after Matilda agreed to free King Stephen, who had become her prisoner after the Battle of Lincoln (2 February 1141).

18 September 1180. Louis VII (b.1120), Henry the Young king’s father-in-law, died after long illness at Paris. Louis was the first husband of Eleanor of Aquitaine. The couple was divorced in 1152, after fifteen years of unhappy marriage. Two months after their union had been declared null and void, Eleanor married her second husband, Henry of Anjou [later king of England]. They had eight children together, Henry [the Young King] being their second child. Upon the Young King's marriage to Marguerite, Louis's daughter from his second marriage, the French king became Henry's father-in-law.

23 September 1158. Geoffrey, the younger brother of Henry the Young King, was born. He is the forgotten brother, underestimated by historians and ignored by novelists, probably because he was the only son of Henry and Eleanor's never to wear a crown [not counting William, who died at the tender age of three]. Nevertheless he proved himself as Duke of Brittany, the title he received upon his marriage to Constance, the daughter and heiress of Conan IV.

27 September 1177. Godfrey, the Chancellor of Henry the Young King, with three hundred others, were drowned while crossing from England to Normandy near St.Valery.

28 September 1066. Henry the Young King’s great-great-grandfather, William I (c1028-1087), better known as William the Conqueror, landed in Pevensey Bay, England. In sixteen days he would be celebrating the victory that would change the course of British history forever.
28 September 1106. The Conqueror’s sons, the eldest and the youngest met on the battlefield at Tinchebrai, Normandy [they probably did not realize that exactly forty years earlier their father landed in England to conquer it]. The youngest [later great-grandfather of Henry the Young King] won a decisive victory and captured the eldest. Henry I, king of England and Robert Curthose, Duke of Normandy, for these were the men, had been fighting over their inheritance for twenty years. Henry’s victory ended the strife and reunited England and Normandy under a single ruler.
29 September 1173. In the course of the Great Revolt, Robert earl of Leicester, one of Henry the Young King’s chief allies, together with his formidable wife, Petronilla and a large force of Normans and Flemings ‘both horse and foot’ landed at Walton in Suffolk after having received the news that the city of Leicester had fallen into Henry II’s hands.