Merry Christmas To All Henry the Young King Readers!

To all Henry the Young King's readers. Greeting! Our blog is taking a break until 8 January, so let me wish you a Merry Christmas and a Happy New Year (hopefully full of Henry the Young King)! Here you can find my last year text about where and how Christmas was celebrated at the courts of Henry and his family.

During festive season I'm going to re-read my favourite Devil's Brood by Sharon Kay Penman, but also find a few minutes to pay a visit to my friend Gabriele's Lost Fort in search of Henry's sister Matilda and her husband Heinrich der Löwe [Henry the Lion], Duke of Saxony and Bavaria.
I will be staying in a company of Edward II and Piers Gaveston, but also of my friend CrazyCris and a certain Clever Boy.

Stay warm and safe (hopefully we won't have to suffer what Henry and his consort, Marguerite were through on the Christmas night of 1172, when "a thunder was heard in Ireland and England and in all of France generally, Sudden and dire, portending something great, new and unusual." It must have been heard by both Henry and Marguerite, who held their Christmas court in Normandy, and by Henry's parents, Henry II and Eleanor of Aquitaine at Chinon. 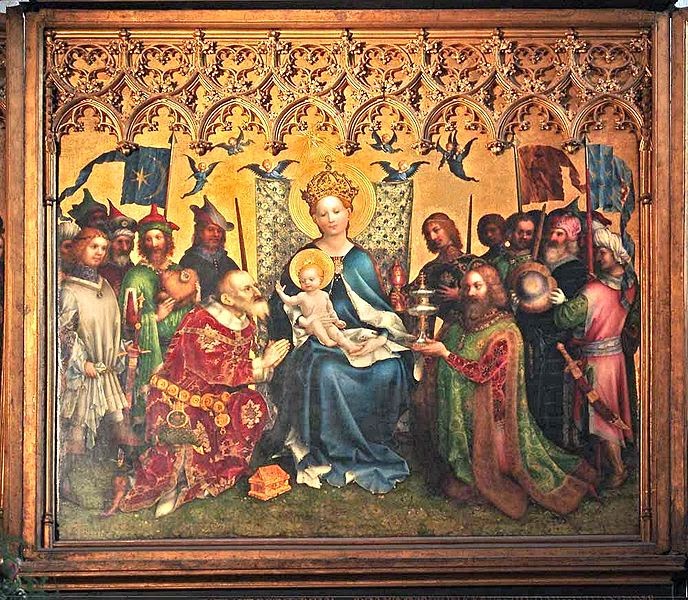 The Altarpiece of the Three Kings by Stephan Lochner, Cologne Cathedral, Germany
(via Wikipedia)

What did Henry or a person closely related to him have in common with Cologne, Germany? (Clue: I mean neither Henry's sister Matilda nor her husband).