Robert the Wayward Prince. A Guest Post by Marsha Lambert

Today I am happy to welcome my lovely friend, Marsha Lambert, who has kindly agreed to share with us her thoughts and impressions after reading Robert the Wayward Prince by Austin Hernon, the novel about Robert Curthose, the oldest son of William the Conqueror. As I have mentioned I intend to write about parallels in the stories of Henry the Young King and Robert one day, for I can see many. Marsha wrote a brilliant review for The Review Group, and with their kind permission we can post it here, on Henry's blog. Big "Thank you!” and over to you, Marsha....

Robert the Wayward Prince Book One: The Getting of Empire by Austin Hernon tells the tale of the not-so-well-known oldest son of William the Conqueror, Robert. This story of Robert begins in 1079, thirteen years after the Battle of Hastings and the Norman takeover of England. Robert, who was about 12 when his father conquered England is now aged 25 and is out and about practicing war games in the borderlands of France. He is there after another disagreement with his father. So begins the pattern of Robert's life. A life full of conflict, love, and adventures. 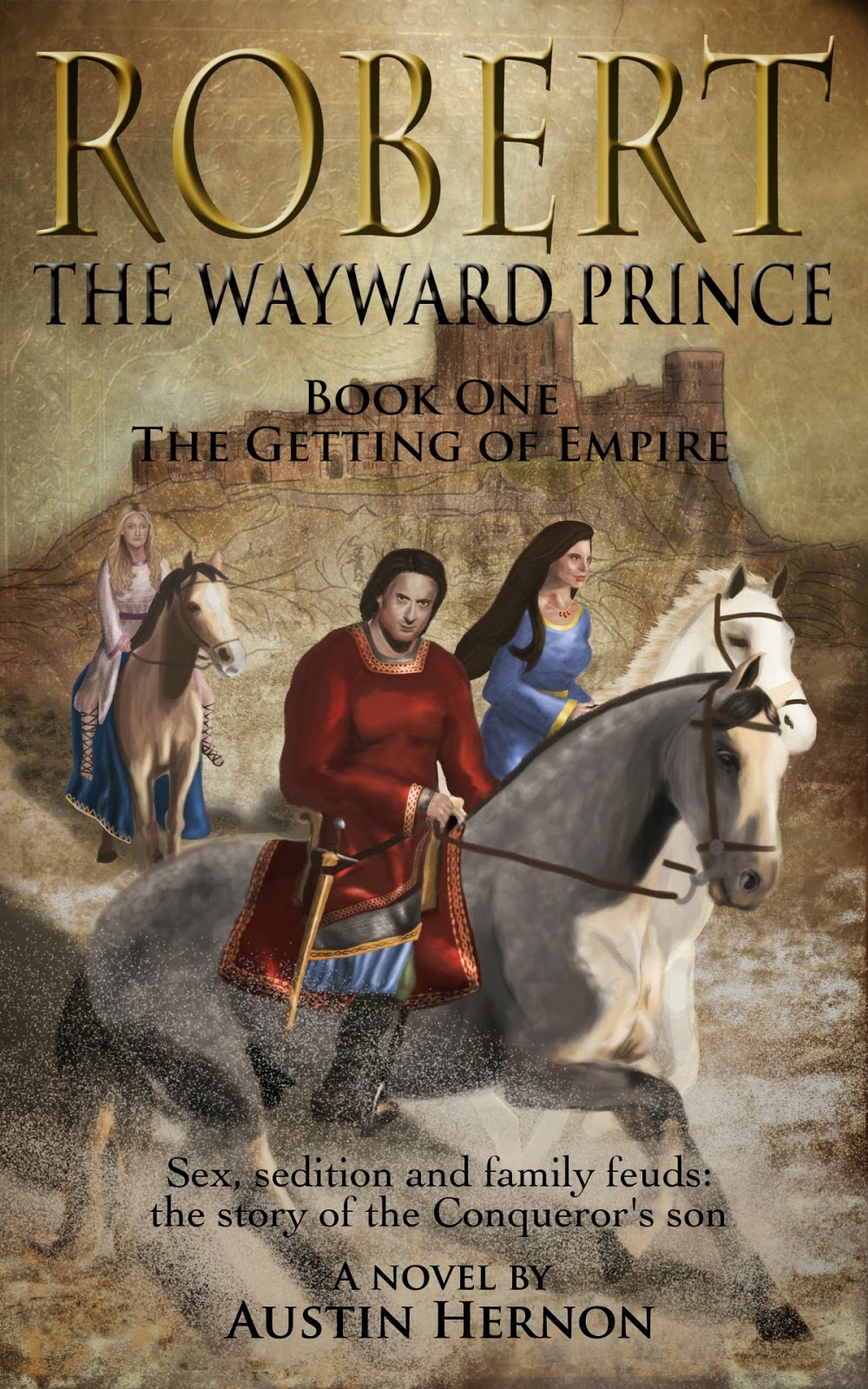 http://www.amazon.co.uk/Robert-Wayward-Prince-Austin-Hernon-ebook/dp/B00EIC3ZAI
Robert had a great many conflicts with his father William, many arising from Robert's way of ruling which disappoints and angers his sire. Robert excels at military campaigns and diplomacy which William takes full advantage of as in his dealings with Malcolm of Scotland. When William dies he leaves Normandy to Robert who becomes Duke and England to his second son, William Rufus. Robert and William Rufus get along for the most part but some conflicts do arise as when William Rufus thinks he can rule Normandy better than Robert. William Rufus will also make use of Robert's skill in warfare and diplomacy in certain of his dealings. Thrown into the mix is William the Conqueror's third son, Henry, who is left money but no land when William dies but will scheme for the land denied him. Throw in a great many rebellious Norman lords and Robert had his hands full. The novel covers all the conflicts Robert endured.

Covered in the tale is Robert's loves, such as his first love Morberga and a Welsh Princess Tegwin, the mother of his two sons, Richard and William. Tegwin, a love of long standing, is made to suffer long separations from Robert as he tries to govern Normandy. While the story does contain some graphic language in the love scenes, one can feel for Robert and Tegwin enduring their separations and the mutual love and respect they have for each other.

One adventure highlighted in the book is Robert's journey to meet Matilda of Canossa, Italy, a fascinating lady of history. We see the journey Robert and his mesnie have to endure and the friendship that develops between Robert and Matilda. Further adventures await Robert and the reader as Book Two: Robert Warrior of the Cross will be coming soon.

If you are a reader who likes a long, adventurous story that covers a great span of time then this book is for you. Austin Hernon writes with authenticity of the time period. One can feel they are part of Prince Robert's mesnie as they attack their enemies or as they travel around Normandy, England, and Italy, so vivid are the descriptions.  I greatly enjoyed reading Prince Robert's story and look forward to reading his continuing adventures in the Holy Land coming in Book Two. I leave you with a quote found at the beginning of the book by the author which so profoundly describes Robert and his life.

Be certain good princes, that when you defy convention you should also write your own history- else those whom you did frighten or discomfort will gladly write it for you. Or worse, bury it.

Austin Hernon was born in the middle of a world war (1941) in an industrial area of north-east England; not surprisingly he led a mostly military life. He was a recovery mechanic in the Royal Electrical and Mechanical Engineers. He also specialized in marine recovery, being a Royal Navy trained diving supervisor. He spent time attached to the Royal Engineers, Royal Marines and three years at sea in Combined Operations - and no, that was not the normal life for a soldier; however he is still, mostly, a working model, if a bit ragged around the edges.

When he retired from the army he worked for British Telecom organising logistics support for field engineers, and then for Royal Mail developing support systems for high value goods distribution.

He then retired and got real busy. He wrote an autobiography, but as he was not a celebrity nobody was interested in publishing it. Along the way he came across Robert and he could see that he had been dealt a bum deal, so he thought that he should put it right.


Thank you, Marsha. I have not read Mr Hernon's novel yet, but your brilliant review has whetted my apetite and I am going to remedy it in the nearest future.