August 1186: Death of Geoffrey of Brittany

Geoffrey, the younger brother of Henry the Young King, was the third surviving son of Eleanor of Aquitaine and Henry II. Born in 1158, he succeeded to the Duchy of Brittany upon his marriage to Constance, the daughter and heiress of Duke Conan IV, in 1181. He supported his elder brother Henry in both 1173 and 1183 rebellions against their father, and, in case of the second one, against their brother Richard. 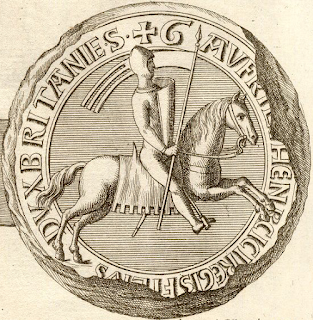 Geoffrey has always been "neglected” by historians, perhaps because he was the only son of Eleanor and Henry who never wore a crown. "Duke among kings”, as he could be called. At present I'm working on his biographical note which should appear on 23 September, being his birthday. Today, however, I would like to focus solely on the events surrounding Geoffrey's untimely death and the depiction of this sad event as described by the contemporary chroniclers*.
The popular version holds it that in August 1186 Geoffrey went to Paris to plot with Philippe Auguste against his father and Richard, and when already there he was killed in a tournament**. As simple as that. It was also said that Philippe was so grief-stricken that he had to be restrained from following Geoffrey into the grave. The latter was buried with great honour in the cathedral of Notre-Dame at Paris ***. Whether Philippe's grief was genuine or not, he had a good political reason for regretting the duke's premature passing. Without Geoffrey and the resources he could draw on, the French king was too weak to chalenge the Angevin dominance and venture into Henry II's territory****

Why did Geoffrey decide to enter into alliance with Philip Augustus in 1186? After all his life's goals and ambitions had been fulfilled: he ruled independantly as a duke of Brittany, including the county of Nantes (since 1185), and as earl of Richmond (from Michaelmas 1183). To get the answer we are looking for we need to go back in time to the events preceeding and following his elder brother Henry the Young King's death in 1183. When Geoffrey had decided to ally himself with Henry against Richard he was third in line to succession, so without prospects of advancement other than by the favour of the Young King when the latter became independent ruler. Young Henry, as the History of William Marshal tells us, placed great trust in Geoffrey and relied on his judgement, which might mean that during Henry III's reign (:-)) Geoffrey might have become influential voice behind the throne or even unofficial co-ruler. Unfortunately, all those plans came to naught when Henry died suddenly in June 1183, leaving his younger brother with no other prospects but to pledge allegiance to their father, the king, which Geoffrey dutifully did in late June or early July at Angers.


To show loyalty to his father he allied himself with the youngest brother John against Richard. John had been told by their father that Aquitaine was his for taking. Richard was in extreme disfavour at the time due to his refusal to give his duchy over to John, which Henry II had demanded of him at Michealmas 1183. Geoffrey, to the contrary, was in high favour, which may explain his position as 'custos' of Normandy in late 1184. With Richard estranged from their father Geoffrey had a good reason to believe that he was only one step away from being acknowledged as future duke of Normandy. Did he not prove himself an effective administrator and military leader? Was he not the only one of Henry II's sons to have produced legitimate offspring?***** Additionaly, according to William of Newburgh, Geoffrey cherished hopes that his father would give him the county of Anjou. In the first half of 1185, however, it became obvious that he would get neither Normandy nor Anjou, for his father reconsidered the possibility of disinheriting Richard and the two came to terms. In return for being recognised as heir to England, Normandy and Anjou, Richard surrendered Aquitaine to his mother, which was confirmed in March 1186. Richard was now the undisputable heir to their father's lands. With little prospect of advancement by his father Geoffrey turned to the French king, Philippe Auguste. Here is how Judith Everard explains Geoffrey's motives: what had been generous provision for the infant third son must have seemed meagre for the second in line of succession to Henry II, and in 1186 Geoffrey was second in line.

Geoffrey must have known Philippe well. Technically his allegiance to the king of France was simply a continuation of a feudal bond which dated back to Phlippe's coronation on All Saints' Day 1179, when Geoffrey is said to have paid homage for Brittany. Furthermore, in 1181, together with his brothers, Henry and Richard, Goeffrey came to Philippe's aid, offering his support against Philip of Flanders (Diceto). The details of Geoffrey's visit to Paris in 1186 remain unknown, and little wonder, all that was said and done was a part of conspiracy after all****** As we know, the scheme failed when Geoffrey died suddenly at Philippe's court.

There were numerous versions of Geoffrey's death circulating at the time, all agreeing that he died at Paris in August 1186. The Gesta Regis Henrici Secundi gives more detailed account. It says that Geoffrey was unhorsed and trumpled to death while participating in a tournament ******* The author adds that Geoffrey had sought the King of France to enter the alliance with him and boasted that he would lay Normandy waste. Strangely enough after saying this Geoffrey was seized by "acute abdominal pain" (Brittany and the Angevins, p.142). As Judith Everard points out, there must have been two different sources of information the chronicler had access to, which suggests that the rumours of Geoffrey's illness had already been circulating at his father's court when the messanger bore the news about his death. Thus we get two contradictory pieces of information in one account. Dr Everard suggests the following sequence of events: Geoffrey was at Paris, where he bacame ill, but recovered and felt well enough to take part in a tournament, in which he met his end. The author finds it all highly improbable. That is why she introduces two possible explanations for the tournament story: either it was the chronicler's pure invention, a device he chose to moralise on how Geoffrey, that "son of perdition" and "son of iniquity" was punished (probably by the Almighty himself) by means of a sinful tournament- but then why spoilt the effect by including the account of Geoffrey's ilness, Dr Everard wonders- or the chronicler simply recorded all the information which came to his knowledge. He used both, the tournament and the ilness, to condemn Geoffrey's trecherous actions. To explain the tournament version it can be assumed that tournament, a purely social occassion, might have been invented by Philippe to hide the truth about real reason for Geoffrey's visit to Paris from Henry II. Without Geoffrey's aid, Philippe was not ready to enter into armed conflict with Geoffrey's father and brother, that's why he did everything to cover up the plotting. His grief for the duke was rather a grief at the loss of a perfect opportunity to conquer the Angevin empire. Judith Everard finds the illness version more probable, noting that incurable as it proved to be, it could not have affected Geoffrey the very moment he made his declaration of allegiance, of course :-) Note: Reminds me of the White Ship sinking described as a divine punishment for laughing down and mocking the clerks who arrived to bless William Atheling and his companions shortly before they embarked.

One thing we can be certain of: in the long run Geoffrey's untimely passing proved to be disastrous for his children. His son Arthur (b.1187), that golden boy, in whom all of Brittany saw the  incarnation of his namesake, the legendary king, was to disappear from the pages of history murdered probably on orders or by his uncle John himself. Geoffrey's daughter Eleanor was to spend her entire adult life in John's and later his son Henry III's custody. She was to live out her days in close confinement in Bristol Castle.

* At the time of his death Geoffrey was a month shy of his twenty-eighth birthday.

*** A plaque commemorating Geoffrey can still be seen today, but it is very difficult to spot as I have learnt thanks to Mr. Malcolm Craig, the expert in Geoffrey and his family. Countess Marie of Champagne, Geoffrey's half-sister, dedicated an altar in Paris for him.

**** Sadly it seems that Philippe was more affected by Geoffrey's death than Henry II himself. The latter, as Gerald of Wales records, was grief-stricken, but mainly because Geoffrey's untimely passing reminded him of that of Henry the Young King (Brittany and the Angevins, p.145). I would be cautious, though, when it comes to Gerald's notes on Geoffrey- apparently he disliked him more than other sons of Henry II. I wonder where this personal hostility stemmed from.

****** As it was rumoured, Philippe enticed Geoffrey with attractive offers, including the seneschalship of France (the prestigious office his brother Henry once held)

Ralph of Diceto. Images of History in The Plantagenet Chronicles. Ed. by Dr. Elizabeth Hallam, London 2002.