‘Alas! How Chivalry Is Now Dead and Buried...' Henry the Young King Quotes

Today I would like to share with you a few Henry the Young King quotes which I find both interesting and telling. Some of them show Henry's proverbial generosity, his love for tournaments and care for his household knights, others his less praiseworthy traits. Over to you, twelfth- and thirteenth-century chroniclers :-)

"… In this man, God assembled every kind of goodness and virtue, and the gifts which fortune usually bestows on single individuals of special distinction, she exerted herself to give all together and in richer measure to this man, so as to make him worthy of all commendation..."

From Otia Imperialia by Gervase of Tilbury, Henry's former chaplain, written in the early 13th century for Henry's nephew, Otto of Brunswick, Holy Roman Emperor (p. 486-7 in The Instruction of a Prince) 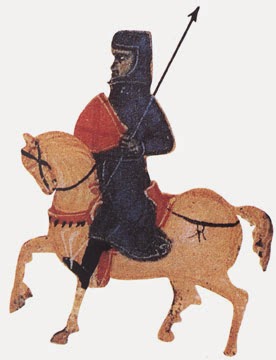 Gervase not only emphasizes Henry's generosity, but also praises his young lord’s good looks, describing him as “fair among the children of men… tall in stature and distinguished in appearance”, with face that “expressed merriment and mature judgment in due measure."

Gerald of Wales (c.1146-c.1223), Henry II’s protégé and court official, despite bearing grudge towards the father, about the son writes in the similar vein as Gervase of Tilbury:

“ In peace and in private life, he was courteous, affable gentle, and amiable, kindly indulgent to those by whom he chanced to be injured, and far more disposed to forgive than to punish the offenders.”

“His disposition was so good that he could never refuse to give anything that was fitting, thinking that no one ought to leave his presence sorrowful, or disappointed of his hopes”.

Which Bertran de Born, lord of Autafort and famous bellicose troubadour, well acquainted with all three Angevin princes, Henry, Richard and Geoffrey, confirms in one of his sirventes:

"Noble hospitality and giving without fickle heart, and fair conversation and warm welcome, and a great court, well paid and well kept up, presents and gifts of arms and living without doing wrong, eating to the sound of viol and song, with many a companion bold and mighty among the best."(Mon chan fenis ab dol et ab maltraire)


“ ...wonderful as was his [Henry's] career, one thing appears almost miraculous, namely, that almost all the world attached themselves to a man who was totally without resources, either in money or territory”.

Gerald of Wales again, who additionally gives us the opportunity to admire Henry's martial skills, comparing his young lord to the “thunderbolt winged by lightening” and giving a vivid description of Henry when in arms and war: “… no sooner was the helmet on his head than he assumed a lofty air, and became impetuous, bold and fiercer than any wild beast”, his “only desire, and the summit of his wishes” being the occasion to prove his valor and fully display his martial genius.

“After this coronation and after this investiture you [Henry II] filched from your son something of his honor/ You took away from him his will, he could not get the mastery of it… A king of land without honor does not know well what to do: the young sovereign did not know it, the gentle and good”

From Chronicle of the War between the English and the Scots by Jordan Fantosme, the spiritual chancellor of the diocese of Winchester and eyewitness to the main events of the Great Revolt of 1173-74. The Chronicle was written without the benefit of hindsight of the Young King’s premature death, that is why the author does not condemn the Young Henry for his rebellion, only tries to understand his motives and explain them to the father and to Henry's contemporaries.

The next two come from The History of William Marshal. Upon William Marshal’s death, on 14 May 1219, his eldest son and namesake commissioned a poem on an epic scale to celebrate his late father’s life story. Written in Middle French and comprising 19,214 lines in rhyming couplets, the Histoire de Guillaume le Mareschal is the only surviving biography of a layman of that time, and it is a treasure chest full of information concerning not only William himself, but also his young lord, Henry

"Alas! How chivalry is now dead and buried, how generosity is cast aside! And that is only right, for the leading light which used to guide them on earth is extinguished. Now those who are poor young knights will have to go looking for their daily bread. There will be nobody again prepared to give them horses, arms, and money, as this man gladly gave them."

Thanks to The History of William Marshal we get the full scale of Henry's generosity. On the occassion of the great tournament held at Lagny-sur-Marne in November 1179 he had with him more than two hundred knights and "whoever was under his command, received twenty shilings a day for each man he had with him from the moment they left their own lands, whether they were on the move or in lodgings.” One can only marvel. According to the author of the History no later patron of the tournament was as generous as Henry.

"It is true that the Young King, in castle and in town, led such a lavish life that, when it came to the end of his stay, he had no idea how to take his leave. When it came to the last day, creditors would appear, men who had supplied him with horses, garments, a nd victuals. This man is owed three hundred pounds; this one a hundred and that one two hundred.”... "My lord has no cash with him, but you shall have it within a month”.


From the above picture the young king emerges as a careless spendthrift and perennial debtor, but coming to his defence I need to point out that this particular trait of his character might have sprung from his own conviction that "he had lost a day when he had not secured the attachement of many by various acts of liberality, and bound them to him, body and soul, by multiplied favors conferred” (Gerald of Wales). The words which the author of The History of William Marshal confirms: "his [Henry's] heart was very much set on pleasing everybody, wise and foolish alike, for such was his wont that he was incapable of refusing anything to any man". He bestowed gifts and favours on his friends and household knights, which Bertarn de Born called "noble hospitality and giving without fickle heart” rather than profligacy.

“Gerald of Wales: On Henry II and his Sons, from the Topography of Ireland, chapters 49-50” from The Historical Works of Giraldus Cambrensis. Translated by Thomas Forester; revised by Thomas Wright. Etext file created for a class by Scott Mcletchie. Reproduced in Paul Hassal, ed. the Internet Medieval Source Book. Fordham University

Otia Imperialia by Gervase of Tilbury. Fragments in “On the Instruction of a Prince: the Upbringing of Henry, the Young King” by Matthew Strickland inHenry II: New Interpretations. Ed. Christopher Harper-Bill and Nicholas Vincent. Woodbridge: Boydell Press, 2007

Chronicle of the War Between the English and the Scots in 1173 and 1174 by Jordan Fantosme translated into English by Francisque Michel Internet Archive of American Libraries.