Henry II of England's Birthday and Other March Anniversaries

Belated birthday wishes to Henry the Young King's father Henry II of England, who was born on 5 March 1133 at Le Mans. The ruler of the greatest empire since Charlemagne, stretching from the Scottish border to the Pyrenees, famous for his administrative skills, personal charisma, sense of humour, symptoms of ADHD and fits of the Angevin rage, Henry was one of the greatest medieval kings. Here's a brilliant birthday post by Ms Elizabeth Chadwick, providing a few glimpses of Henry as a boy as described in her novel Lady of the English. 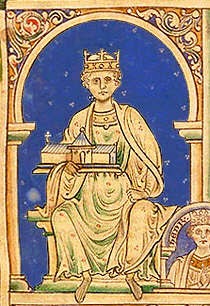 Rather sheepishly, I have to mention that exactly forty years later, Henry’s eldest surviving son and heir, Henry the Young King gave his sire the worst birthday present ever. He escaped from Chinon Castle, where he was staying in his father's company, and made his way to the French territory, triggering what was to become the Great Revolt of 1173-74. Coming to his defence I need to point out that this was in great measure Henry II’s own fault. To see what I mean, take a look at my last year's post here.

Here are a few other March anniversaries:

2 March 1127: The murder of Count Charles of Flanders, who was assassinated while kneeling at morning prayer in the church of St Donatien in Bruges. Charles died childless and his death affected the lives of the Young King’s paternal ancestors: Henry I, his daughter Matilda and the young Geoffrey of Anjou.

2 March 1170: Henry II, after settling matters in Brittany, crossed to England in a violent storm. One of the ships, with four hundred men on board, sank and the others were dispersed, reaching various ports along the south coast. The king, safe and sound, landed at Portsmouth the following day.

3 March 1170: Henry the Young King’s younger brother Geoffrey, Duke of Brittany, crossed to England from Normandy. During his father’s Christmas court of 1169 held at Nantes eleven-year-old Geoffrey received the oaths of fealty from the Breton barons.

7 March 1226: the younger half brother of Henry the Young King, William Longespée (b.1176), Henry II's illegitimate son by Ida de Tosny died. At the time of his birth Henry the Young King was a mature man. When William was seven, Henry was already dead. I doubt that the younger brother (William was twenty-one years Henry's junior) born out of wedlock mattered a lot to the Young King, but Longespée, a skilled knight and battle commander, was a colourful figure in his own right. In 1196 his half brother Richard I the Lion Heart married him to the great heiress, Ela of Salisbury, thus making him the 3rd Earl of Salisbury.

11 March 1198: Henry the Young King’s half-sister Marie, Countess of Champagne for over thirty years, died. Today she is best remembered for being Eleanor of Aquitaine’s eldest daughter and because of her associations with Chretien de Troyes. Under her and her husband, Henry the Liberal’s (1152-81) patronage the court of Champagne and its literature flowered. You can read about Marie here.

14 March 1176: Great council assembled at London. At the time Henry the Young King appointed Geoffrey, provost of Beverley and nephew of Roger, Archbishop of York to be his chancellor (Geoffrey would die on 27 September next year in the "sinking of several ships" while crossing from Normandy to England). Henry and Marguerite spent the second half of March in Porchester awaiting a fair wind to cross the Narrow Sea. About 31 March Henry is summoned by his father to come to him to Winchester to spend Easter with him. Henry complied.

16 March 1181: Henry the Young King's borther-in-law Henry I ‘the Liberal’ of Champagne, Marie’s husband died, having returned from the pilgrimage to the Holy Land. Upon his death Marie became a regent for their eldest son, also Henry (future king of Jerusalem) and ruled in his name for six years until he reached maturity. Henry the Liberal, who at twenty-five succeeded his father as count of Troyes and Meaux, constructed a territorial state from his father’s disparate lands and made Champagne one of the major states of northern France.

19 March 1148: Henry the Young King’s mother, Eleanor of Aquitaine and her first husband, Louis VII of France, ‘ragged and seasick’, sailed into the port of St Simeon near Antioch. They were on their way to free Jerusalem in the course of the second crusade, the expedition that proved to be disastrous for them, not only in the matters of politics, but also their royal marriage.

19 March 1163: Prince Henry and his father were at Dover where the meeting was arranged between them and Count Thierry of Flanders and his eldest son, Philip to discuss the matter of military services the counts of Flanders were bound to render to the kings of England.

19 March 1178: Midlent Sunday: Henry, his father and his younger brother John were present at the dedication of the church of Bec (dedicated by Rotrou Archbishop of Rouen). Henry II endowed the church with the annual payement of 100 pounds of Angevin money (from his mills of Robec, a stream which falls into the Seine near Rouen).

21 March 1152: After fifteen years Eleanor’s marriage to Louis VII of France came to an end. Louis had the marriage declared null on grounds of consanguinity, but it was only a cover. He yearned for a male heir and Eleanor, apparently, was unable to provide him with one. In the fifteen years she bore him only two daughters, Marie (b. 1145) and Alix (b.1151). Scarcely two months passedsince the divorce when she married Henry of Anjou, whom she later gave five sons (Henry the Young King among them) and three daughters.

22 March 1159: Henry II issued summons to his vassals in both England and his continental domains to assemble at Poitiers on 24 June in order to set off to regain what he considered his wife’s rightful inheritance, Tolouse.

25 March 1175: after conference at Gisors (24 February) Henry, staying at Rouen at the time, was summoned by his father (then at Caen) to accompany him to England. The Young King refused, which may indicate that he and his father were not fully reconciled at the time - it was the aftermath of the Great Revolt of 1173-74.

26 March 1182: Henry the Young King’s first cousin, Elisabeth/Isabelle, the elder daughter of Petronilla (Eleanor of Aquitaine’s sisiter) and Raoul of Vermandois and the wife of Philip of Flanders died. Her passing gave rise to dispute over her dowry and its succession between her husband, her younger sister Eleanor of Beaumont-sur-Oise and the French king, Philip Augustus.

26 March 1199: Henry the Young King’s younger brother, Richard I, the great crusader king was struck in the shoulder by a crossbow bolt while he was besieging the castle of the Viscount of Limoges, who had rebelled against Richard and made the treaty with Philip Augustus. This is how Bernard Itier, who at the time of Richard’s death was a monk in the abbey of St Martial in Limoges (where he later became librarian), described the event: ‘… most warlike King of the English, was struck in the shoulder by an arrow while besieging a keep at a place in Limousin called Chalus-Chabrol. In the castle there were two knights with about thirty-eight others, both men and women. One of the knights was called Peter Bru, the other Peter Basil, of whom it is said that he fired the arrow which struck the King…’ The wound proved mortal and Richard died within eleven days, ‘on the Tuesday before Palm Sunday, on 6 April, in the first hour of the night’.

27 March 1168: According to Eyton, on this day Patrick, Earl of Salisbury, the uncle of William Marshal was killed in an ambush in Poitou. Together with his then twenty-one-year-old nephew and a small force he was escorting Queen Eleanor from castle to castle when they were surprised by the Lusignan brothers. Shortly before Henry II had quelled the rebellion of which they had been chief instigators and took the Castle of  Lusignan. Further deatils here.

29 March 1187: Henry the Young King’s nephew, Arthur of Brittany, son of Geoffrey and Constance, was born at Nantes, eight months after his father’s untimely death at Paris. More information here.

c. March 1181: Henry's natural brother, Geoffrey, bishop elect of Lincoln, after consulting his father and his three younger half-brothers, Henry, Richard and Geoffrey, renounced his election. They were all staying in Normandy at the time.

Closing days of March 1182: Henry's father held conference with young Philippe Capet and count Philip ofd Flanders at Senlis. Henry the Young King was present together with the papal legate Henry, the bishop of Albano and William, Archbishop of Reims (Philippe's maternal uncle).

March 1183: Henry and his borthers Richard and Geoffrey met their father at Angers. They made "peaceable arrangements" among themselves and swore fealty to Henry II. then a conference was held at Mirabel to discuss further details. Geoffrey was sent to Limoges to negotiate with the disgruntled Poitevan barons and summon them to the conference, but joined them instead. Henry the Young King sent Marguerite to her borther;s court at Paris and went to Limoges to "convert" Geoffrey, but joined the rebels too. The war with Richard began.

The Charters of Countess Constance of Brittany and her Family, 1171-1221, ed. by Judith Everard and Michael Jones. Google Books.

Images of History by Ralph of Diceto in The Plantagenet Chronicles ed. by Dr Elizabeth Hallam.Greenwich Edition, 2002.

The Annals of Roger of Howden. Vol I. Trans. by Henry T. Riley. Internet Archive of Northeastern University Libraries

The Aristocracy in the County of Champagne 1100-1300 by Theodore Evergates. Google Books.

Richard the Lionheart by John Gillingham. Weidenfeld and Nicolson, 1989.

William Marshal. Court, Career and Chivalry in the Angevin Empire 1147-1219 by David Crouch.Longman, 1990