1 November marked the anniversary of the coronation of the young Philippe Capet (b.1165) at Reims Cathedral in the presence of his brother-in-law*, Henry the Young King, who accompanied by his younger brothers, Richard and Geoffrey represented the House of Anjou in the absence of his father, Henry II of England. Here is a detailed account I wrote to commemorate the occasion three years ago as one of the first posts on this blog:


“… William, Archbishop of Rheims, crowned … Philip, the son of his sister Ala who was now in the fifteenth year of his age, and anointed him king at Rheims, in the church there of the Pontifical See, on the day of the feast of All Saints, being assisted in the performance of that office by William, archbishop of Tours and the archbishops of Bourges and Sens, and nearly all the bishops of the kingdom. Henry, the king of England, the son, in the procession from the chamber to the cathedral on the day of the coronation, proceeded him, bearing the golden crown with which the said Philip was to be crowned, in right of the dukedom of Normandy.” 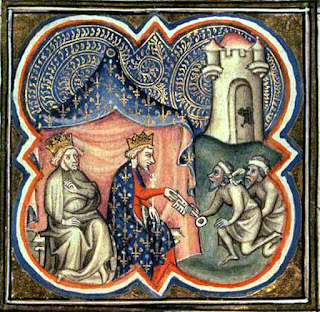 Henry the Young King, aged four and twenty, accompanied by his younger brothers, Richard, duke of Aquitaine and Geoffrey, duke of Brittany represented the House of Anjou at the coronation of his brother-in-law, Philip, later known as Augustus*. On All Saints’ Day, 1179, not yet fifteen-year-old Philip, following Capetian tradition, was anointed and crowned at the cathedral of Reims by the archbishop of Reims, William Whitehands [Guillaume aux Blanches Mains], his uncle. At the time of the ceremony, Philip’s father, Louis VII was yet alive, but “labouring under old age and a paralytic malady” unable to attend. Philip’s mother, Adela of Champagne was also absent, probably tending to her ailing husband...

And here's a great post about Philippe by Mr Richard Willis. Highly recommendable!

"Every sobriquet tells a story. Henry I was called “Beauclerc” for his scholarly interests (unusually for someone outside of the clergy, he could read Latin), Charles I was called Charles the Great (Charlemagne, as we know him today) because united much of Western Europe for the first time since the fall of Rome, and Frederick I was known as Barbarossa for his red beard.However, there was one sobriquet that was probably revered above all others. Taken as the honorific of Caius Octavius Thurinus (Caius Iulius Caesar Octavius, or Octavian) on his ascension as princeps (“the first” – he never called himself emperor, though he basically was one), the sobriquet of Augustus, “the revered one” (hence an august elder statesman), has not been conferred upon many other rulers throughout the years.Philippe II, king of the Franks (King of the French from 1190 on), was originally given the sobriquet due to his birth in the month of August. And yet, somewhat curiously, that fact has been forgotten – because Philippe himself accomplished enough to call himself revered. In 43 years on the throne – ruling alone for most of that period – he managed to triple the holdings of the French crown, most of it at the expense of his hated rivals, the Angevin kings of England..."