Since my lady of Champagne wishes me to undertake to write a romance, I shall very gladly do so, being so devoted to her service as to do anything in the world for her, without any intention of flattery. But if one were to introduce any flattery upon such an occasion, he might say, and I would subscribe to it, that this lady surpasses all others who are alive, just as the south wind which blows in May or April is more lovely than any other wind.... I will say, however, that her command has more to do with this work than any thought or pains that I may expend upon it. Here Chretien begins his book about the Knight of the Cart. The material and the treatment of it are given and furnished to him by the Countess...

Thus began Chrétien de Troyes in the opening lines of his Le Chevalier de la charrette [Lancelot, The Knight of the Car]. The Countess he mentioned was Henry the Young King's elder sister Marie of Champagne who died 818 years ago, on 11 March 1198, aged fifty-three. 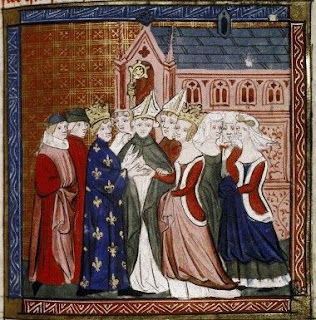 The wedding of Louis VII of France and young Eleanor of Aquitaine. in 1137, Les Grandes Chroniques de France, 14th century

Marie was Henry's half sister, to be precise. To make it even more complicated, she was both Henry's and his wife, Marguerite's half sister. The eldest child of Eleanor of Aquitaine (1124-1204) and Louis VII of France (1120-1180), Marie was born in 1145, eight years after her parents' wedding. The story of her arrival is a well known one. Young Eleanor [she was 20 at the time], her royal husband and his subjects must have been greatly disturbed by the fact that years passed and much awaited male heir to the throne did not appear. Many became convinced that the queen was barren. Eleanor decided to seek advice of Bernard of Clairvaux [later saint]. The meeting was arranged on the occasion of the dedication of Abbe Suger's newly built cathedral at Saint-Denis, in June 1144. Eleanor met Bernard in private to discuss her sister Petronilla and her husband Raoul's marriage. She asked him to intervene on the latters' behalf promising to make concessions in the matter of Champagne (Louis and Count Thibaut were waging war) and perhaps recognize Peter de la Châtre as archbishop of Bourges. What she said and the “manly” way she presented her ideas must have horrified the holy man, for he rebuked her harshly, commanding her to stop meddling in affairs of state. Eleanor, a shrewd tactician, humbled herself by saying what troubled her most, namely her failure to produce a child. Upon hearing this Bernard offered her a bargain. She was to do everything she could to re-establish peace and he, in return, by his prayers would obtain from the Lord what she requested. Eleanor reported the abbot's words to Louis and kept her part of the bargain. Bernard, as the time showed, was less successful. The royal child indeed was born the following year, but it was not a much awaited son, but a daughter, whom Eleanor named Marie. 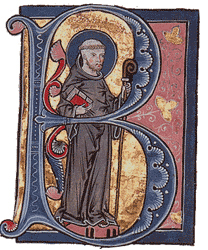 Bernard of Clairvaux as depicted in La Légende dorée [The Golden Legend] , c. 1260

Marie was barely seven and her younger sister Alix one, when their parents obtained the annulment of their marriage in 1152. They stayed in their father's care. Both seem to have had little contact with their mother thereafter. Louis had them bethrothed to the brothers Henri of Champagne (1152-1181) and Thibaut of Blois*. Marie had long been promised to Henri, whom her father befriended on the Second Crusade and who at twenty-five succeeded his father as count of Troyes and Meaux. In 1155, the year when Marie's half-brother Henry [the future Young King] was born, ten-year-old Marie was staying under the tutelage of abbess Alice of Mareuil, at the prestigious old Benedictine convent of Avenay, near Epernay, in Champagne, where she had been sent to in 1153, the year she reached the canonical age of consent and was formally betrothed to Henri of Champagne. They were married in 1159, when Marie was fourteen. Some scholars still give the date of 1164 for Marie and Henri's wedding, proposed by Henri d'Arbois de Jubainville (Histoire des ducs et des comtes de Champagne [Paris, 1861], III, p.96), who bases it on 'a late and unreliable document', but I would rather follow June Hall McCash, who gives 1159 as the date, explaining that (let me quote): "An 1159 charter refers to Marie as "Trecensis comitissa", evidence that the marriage of Henri and Marie had already taken place. In the twenty-two years of their marriage they had four children: Henri, Marie, Scholastique and Thibaut. 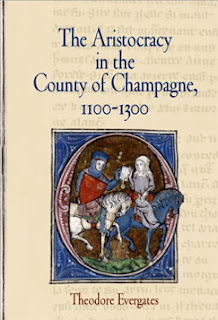 Sometime in 1178, Marie's husband decided to revisit the Holy Land. In the count’s eighteen-month absence (May 1179 - February 1181) Marie ruled the county in his stead. She had never done it before because her husband had his system of governance well established before she arrived in Troyes and because there was no such need. She did it alone, without regency council, and she showed great skill and decisiveness. She did not hesitate to join the opposition against her half-brother Philip, when the latter acted against his mother's family and married Isabelle of Hainaut, who was already bethrothed to Marie's oldest son, Henri. Marie's husband returned from the Holy Land in February 1181 only to die a month later, on 16 March 1181. After his death Marie exercised the comital office as regent, this time for her son Henri (II), for six years (March 1181- May 1187). We get the glimpse of Marie the politician thanks to Gislebert of Mons, who, in his Chronicle of Hainaut, described the conference at Sens, between Marie, her late husband's family, her brother Philip [Augustus] on one side and Baldwin, the count of Hainaut on the other. The latter was summoned by Philip to “keep the cotracts of matrimony confirmed for his children and the countess of Champagne's children, with faith given and oath offered.” (Chronicle of Hainaut, p.104)** Baldwin asked for delays, but he was, as Gislebert put it, “constrained” by the countess and her in-laws. Cornered, the Count came from Sens to Troyes, where the contracted marriage of his son Baldwin, and Marie of Champagne (the daughter) was sworn on both sides.

When Henri reached maturity and assumed the countship Marie decided to retire to Fontaines-les-Nannes, a Fontevrist priory near Meaux, taking with her her second son, eight-year-old Thibaut. Marie herself was forty-two at the time and probably could not have imagined she was ever to rule again. The fall of the Holy City, however, made her son, Henri, as many young men at the time, take “the Jerusalem road”. In 1190, before he set off at the head of a large contignent of barons and knights to accompany his uncle, Richard I , king of England [Lionheart], on the Third Crusade, he summoned his barons and knights to Sezanne to swear oaths of fidelity to his twelve-year-old brother Thibaut in the event that he himself did not return from the Holy Land. Upon his departure Marie resumed the office of a regent. She could not have known she would never see her son again, for “... although all the kings and princes returned from there to their own lands, he remained there as if alone, and received through a certain marriage the kingdom of that land, the wealth of which seemed greater than his own regions’(Chronicle of Hainaut, pp.139-40). ‘A certain marriage’ meant Henry’s marriage to Isabelle, daughter of King Amaury I of Jerusalem and widow of Conrad of Montferat, whom Henry took as his wife on 5 May 1192. Henry refused the title of king, styling himself ‘lord of the kingdom of Jerusalem’ and to the very end ‘count of Champagne'. He died tragically on 10 September 1197 in a most peculiar accident, falling from a window of his palace at Acre. Was it a window or balcony railing that gave way under his weight? The accounts differ when it comes to details. One thing is certain, though: at the time of his death Henry was thirty-one, too young and promising man to die. His untimely passing must have left Marie utterly distraught. 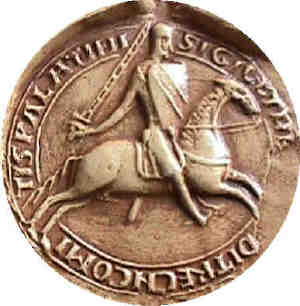 Still she continued as regent for her younger son Thibaut (III) until her death in March 1198. A month later, Thibaut, aged nineteen, was knighted by his uncle Philip of France [Augustus] and did homage for his lands at Melun. He was to rule for three years, till May 1201, when he died suddenly in the midst of the preparations for the Fourth Crusade. Fortunately, Marie did not live long enough to see him passed away prematurely and in the flower of his youth. Thibaut's widow, Blanche of Navarre, being in the last weeks of her second pregnancy and absolutely unprepared for a role she was thrust into, did the only thing she could do. She immediately made her way to Sens, where she did homage to King Philip, who became her protector and guardian of the future Thibaut IV. The latter was born within days of Blanche's return to Champagne. Blanche was to be regent for her son for the next twenty-one years (according to the custom in Champagne, counts could succeed their deceased fathers at twenty-one).

Very little is known of Marie's personal life. There is evidence she was close to her half-brothers, Richard and Geoffrey. With the former she shared Adam of Perseigne as confessor, for the latter - after his untimely death in 1186 - she dedicated an altar in Paris. She also entertained her half-sister, Marguerite, the Young King's widow, at the Christmas court of 1184. As for her relationship with Henry the Young King, they certainly met on 11 April 1182 at La Grange St Arnoult, between Senlis and Crepy, at the conference held to discuss the Vermandois succession. They also must have met on different occasions, such as tournaments, official meetings and royal banquets. 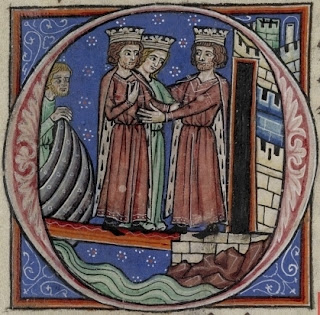 Today Marie is best remembered as the generous literary patroness. Both Marie and her husband sponsored much literature, but their tastes differed. He preferred religious texts written in Latin, whereas she apparently did not read Latin well and thus comissioned texts in vernacular. Her tastes were avantgarde. At her brilliant literary court Marie entertained and supported, among others, Chretien de Troyes, who wrote Le Chevalier de la charrette [Lancelot, The Knight of the Cart] at her request. According to Chretien she had not only comissioned the work, but also supplied him with material [or plot] and interpretation. As we know, Lancelot's fame was to reach the most remote corners of the world and we can safely thank Marie for it. In my native Poland, for instance, one can see the last Sir Lancelot of the Lake wall paintings preserved in situ. Check here.

Next to Chretien, a few other authors wrote about the Countess, including Gautier d'Arras, her younger half brother Richard I the Lionheart and Rigaut de Barbezieux, a few more mentioned she encouraged them to write, Gace Brule, one of the first lyric poets writing in French, among them. Marie's own grandson, Thibaut (1201-1253), Count of Champagne and later King of Navarre composed songs and was to go down in history as "Thibaut le Chansonnier". 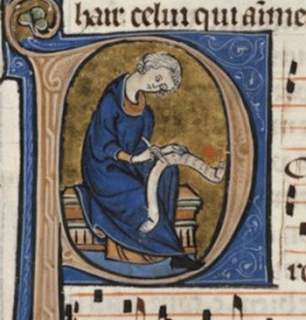 Marie's grandson, Thibaut IV, Count of Champagne and later King of Navarre as Thibaut I
Written by Katarzyna Ogrodnik-Fujcik


* Louis VII himself married Henri and Thibaut's sister, Adele, meaning that the latter was both sister-in-law and stepmother of Marie's

Chronicle of Hainaut by Gilbert of Mons. Translated into English by Laura Napran. The Boydell Press, Woodbridge, 2005

The Aristocracy in the County of Champagne, 1100-1300 by Theodore Evergates. Google Books