Happy Birthday to the lovely and gracious Lady! Big thank you for my renewed interest in one of the most tempestuous royal families of the Middle Ages, especially for the great masterpiece Devil's Brood, in which Henry the Young King shines in all his virtues and vices, and for a kind mention  in the latest post on the blog. If you still haven't read Sharon Kay Penman's novels, here's a chapter of the above mentioned Devil's Brood. I strongly encourage you to read it (and then the entire book :)) 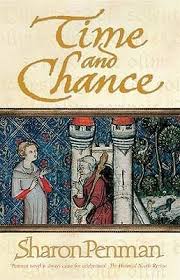 I am currently reading the biography of Henry the Youg King by Matthew Strickland. Here come the first impressions and reflections...

Professor Strickland's voice and my humble voice come unanimous in one thing: I have always strongly believed  - even if my opinion was based only on waht was known of Henry the Young King's personality rather than certainty (for how it could be otherwise) that had Henry the Young King lived long enough to become the sole ruler of the so called Angevin Empire, his reign would not have been as absolute disaster as modern historians believe it would. Normandy, for example, would not have been lost (or at least not as soon as John lost it). As Professor Strickland points out, Henry and his brother-in-law Philippe Auguste's relationship was "cordial" and if we add Henry's "winning personality" and his renown of a chivalrous warrior ('... young Henry had forged a new image of chivalric kingship in a manner that was not to find an equivalent among monarchs of England until Edward III', Strickland, p. 325)) it seems highly improbable that such loss would have occured during his reign. Also, quite probably, there would have been no tensions in regard to the vexing matter of the Norman Vexin, which after Henry's untimely passing came to haunt Henry II and Richard I respectively.... Since these are just first reflections and conclusions on Professor Strickland's excellent and meticulous study, I'd better stop now and in a spare moment make them into a longer post ;)

Just as a note, to my utter delight, I have just read that in the 17th century (!!!) one man contemplated and disscussed at lenght the Young King's rather tragic life and apparently he was more objective  in his judgement than today's generally hostile historians.