The Young King is dead. "All are overjoyed, all rejoice: the father alone bewails his son". Oh, how wrong Roger of Howden was when he penned this. By "all" he obviously meant Henry II's supporters, but also representatives of the Church who regarded the late king as "second Absalom" and parricide. As we know, however, the young king's untimely passing caused the universal outpouring of grief and his posthumous fame as a prodigal son who returned to his father on his deathbed and died almost a martyr's death triggered off the events that could have led to his canonization. When Henry lay dying in the humble house of a blacksmith in the obscure little town of Martel, Limousin, he couldn't have foreseen that his death, the surrounding events and its aftermath would become a subject of sermons and, in the long run, research and dissertations not only of the acclaimed academic medievalists, but also of a young and promising Polish historians of the University of Warsaw :) 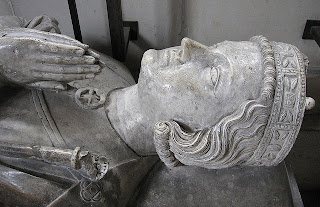 Today Henry the Young King's posthumous fame continues to spread. Not only thanks to Professor Matthew Strickland's excellent biography, but also thanks to the aforementioned young and promising Polish historians. I have just finished reading my friend's M.A. thesis on Thomas Agnellus and his sermon which at the time of its creation was meant to build up the cult of the late Young King, but, as we all know, failed in achieving its ultimate goal - De morte et sepultura Henrici regis iunioris. The proclamation of royal sanctity in 12th century monarchy of the Plantagenets


Henry the Young King's birthday is fast approaching and thus I have invited Ms Katarzyna Ścierańska, the author of the thesis, to the blog. On 28th February we are going to discuss not only main points of her dissertation, but also main events of Henry's life and short career (his tournament fame included). Hope you will join us. Looking forward to meeting you all on the appointed day :)