‘… on 7 September 1151, the victorious duke of the Normans, of the people of Anjou, Touraine and Maine, returning from a royal council [held in Paris by Louis VII of France], having been taken seriously ill with a fever [after he went to swim on a hot day] … collapsed on his couch. Then, looking into the future of his land and his people with the spirit of prophecy, he forbade Henry his heir to introduce the customs of Normandy or England into his own county, nor the reverse, as it might be, according to the succession of changing fortune’. This is how John of Marmoutier described Henry the Young King’s paternal grandfather, Geoffrey le Bel of ’s sudden death at the Chateau-du-Loir, in the Pays de region of . Geoffrey was only thirty-nine and did not live long enough to see his eldest son, Henry crowned king of . He was buried in the of at ‘in a most noble tomb which the righteous bishop, William of pious fame, had built fittingly. Such a venerable likeness of the count was fashioned there, suitably ornamented with gold and precious stones, that it seemed to express their doom for the proud and grace to the humble. At the altar of the crucifix, at which the dead man lay, a chaplain was appointed by the bishop with a stipend in perpetuity, who each day offered the sacrifice to God for the count’s sake…’
Best known as the father of future Henry II and founder of the Plantagenet dynasty, Geoffrey had become the count of  upon his father, Fulk V’s departure to the  in 1128. Shortly before he had married Matilda, dowager Empress and daughter of Henry I of . Marrying the daughter of a king and the widow of an emperor was an excellent match for the son of a count. 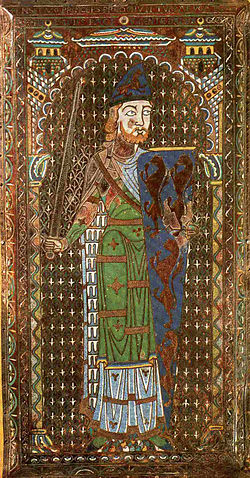 The image of Geoffrey on his tomb at Le Mans

On the 17th day of June, eight days after Whitsun, in the year 1128, Henry the Young King’s future grandparents were standing in the presence of archbishops, bishops, abbots, and priests of all ranks, and listening as the solemn masses blessing their marriage were celebrated in Le Mans. Matilda was twenty-six at the time whereas her betrothed was a youth two months shy of his fifteenth birthday, newly knighted by his father-in-law, Henry I of .

There was rejoicing amidst the clergy, dancing by the people and the shouting of praise by all and sundry, whether native or foreigner, rich, middling or poor, noble or commoner, soldier or husbandman drawn in by the general rejoicing. He who was unconcerned by the wedding festivities was doubtless deemed a traitor. Men and women spent the wedding feast taking their fill of the different dishes. For three weeks, the marriage was celebrated without a break and, when it was over, no one left without a gift.

Blessed with good looks Geoffrey was later called ‘le Bel’, a nickname he won due to being ‘tall in stature, handsome and red-headed’. He had other praiseworthy qualities as well: ‘unusually skilled at warfare… energetic soldier, shrewd in his upright dealings, exceptionally well educated, generous to all’. John of Marmoutier, Geoffrey’s first biographer claimed that the count ‘differed in no respect from the most excellent princes of his time and was loved by all, although he endured much trouble from his own men’. Perhaps the aforesaid John gave us a clue, a key to Geoffrey’s success, when he wrote that ‘being intelligent and of strong character, he did not allow himself to be corrupted by excess or sloth in early adulthood, but spent his time riding around the country and performing illustrious feats, but saying little about himself as he did so’. I daresay that in that love of illustrious feats, Henry the Young King must have resembled his grandfather. A pity they had never been given a chance to meet. Unless the posthumous meetings do count, of course. I have Henry the Young King’s speedy and utterly unplanned burial at St Julien in mind, where his body was  interred next to his grandfather’s resting place for a short time in the course of the hot and humid summer of 1183.

Good-looking or not, Geoffrey failed to impress his imperial bride. She remained cold and aloof throughout the splendid wedding celebrations of 1128 and throughout the twenty-three years of their marriage. She never ceased to despise him as her social inferior. He was her second husband. In 1114 she had been married to Henry V, Holy Roman Emperor. Henry died eleven years later and Matilda returned to . Geoffrey and Matilda’s marriage was described as tempestuous. They disliked each other from the start. On the other hand, they both proved to be tough and ambitious, as well as shrewd politicians. They fulfilled their duty and produced the children necessary to guarantee the continuation of their lines. They had three sons: Henry (later Duke of Normandy, Count of Anjou, Maine and , King of England) in 1133, Geoffrey (future count of ) in 1134, and William, count of  in 1136. Like so many royal and aristocratic marriages Matilda and Geoffrey’s was an arranged match. It all started with the murder of Count Charles of  on 2 march 1127. Charles died without issue and what followed was a struggle over the succession to his county. One of the candidates, who managed to obtain an advantage over his rivals, happened to be Heny I’s nephew, William Clito, son of Robert Curthose, duke of . Matilda’s father was forced to seek allies in order to avoid the direct consequences of facing a coalition of Flanders and  acting in support of William Clito. In 1118 the same coalition with help of the count of  had become the greatest threat to his hold on the Anglo-Norman realm. This time Henry successfully prevented Fulk V of ’s alliance with the northern French forces, promising his only daughter’s hand to Fulk’s son and heir, Geoffrey. No doubt Count Fulk had every reason to rejoice over his diplomatic success.

Matilda had been promised the succession of both,  and . But upon Henry I’s death in 1135 her cousin, Stephen of Blois, seized the throne leading to nineteen years of civil war, known today  as the Anarchy. The barons of the realm, although they had sworn allegiance to Henry I’s daughter, chose to support Stephen’s cause in the end. Mainly because Matilda was a woman- there was no precedent for the  to be ruled by a female- and a stranger (she had been sent to German court as a girl of eight and brought up there according to the ‘foreign’ customs). But if they thought that Matilda would come to terms with this, they were wrong. The Empress was most unwilling to give up what she considered hers by right. When she was fighting over her inheritance in , her young husband made himself busily occupied in , the conquest of which he completed in 1144 after taking  and being invested as duke. One year later, the last of Stephen’s strongholds, Arques, fell to him. In 1149 Geoffrey had turned over the duchy to his eldest son Henry.

Matilda outlived her second husband for sixteen years. She died on 10 September 1167, at the Abbaye de Notre-Dame de Prés, near  and was buried at the Abbaye du Bec, the religious house she had cherished throughout her life. The monks, following their benefactress’s wish, interred her body before the altar of the Virgin Mary. According to Stephen (known as Stephen of Rouen- Fr. Etienne de Rouen), one of the monks, when she died the flower of the meadow (Fr.le pré) withered and a star fell. It was the first time when Empress Matilda was compared to a flower. Usually she was described in quite different words, such as ‘haughty, hard, inflexible and lacking feminine qualities’ and best remembered for pitching England into a disastrous civil war while trying to win back what she considered her rightful inheritance. And she might have won, had she only not alienated those whom she ought to have treated with due respect. Her chief allies, David I, king of Scotland (her maternal uncle) and Robert of Gloucester (her half-brother and the eldest of Henry I numerous illegitimate children) were influential backing in her war against Stephen, but proved not enough to overcome the main obstacle, Matilda’s own personality. Instead of trying to win as much support as possible, the Empress showed the same lack of political acumen as her enemy and cousin, king Stephen. After ‘God’s judgment was passed on’ Stephen and he was captured at the battle of , ‘the Empress was regarded as their lady by all the English except in , where the queen and William of Ypres fought against her with all their might. She was first recognized by the bishop of , the papal legate [and Stephen’s brother], and soon after by the Londoners. But she was puffed up with intolerable pride because her followers had been so successful in the uncertainties of war, and she alienated everyone from her. So, whether by conspiracy or by divine providence (for whatever men do is by the will of God) she was expelled from ’. She had levied a heavy tax from the citizens (who showed enough eagerness to support her cause) and offended nobles who could have provided arms, ipso facto turning their loyalty and willingness to cooperate into resistance. Still it is hard not to admire her iron will and determination. She was an exceptional and powerful woman in an age dominated by men. Tough and ambitious, she never deviated from her political aims. In the end, it was she who won and lived to see her beloved eldest son, Henry crowned king of . Her epitaph in the Rouen Cathedral (to which her remains were moved from Bec) reads, “Great by birth, greater by marriage, greatest in her offspring, here lies Matilda, the daughter, wife and mother of Henry”.

History of Duke Geoffrey by John of Marmoutier in The Plantagenet Chronicles edited by Dr. Elizabeth Hallam. Greenwich Editions, 2002.
The History of the English by Henry of Huntigdon in the Plantagenet Chronicles ed. by Elizabeth Hallam. Greenwich Editions, 2002.
Henry II by W. L. Warren. Google Books.
The Angevin Empire by John Gillingham. Edward Arnold, 1984.
Historical Dictionary of the British Monarchy by Kenneth J. Panton. Google Books.
Eleanor of  and the Four Kings by Amy Kelly. Vintage Books, 1950.