Henry the Young King spent Christmas 1175 at together with his father, the elder king Henry. As the year came to an end and the new year 1176 began he was the most unhappy young king in Christendom. Exactly two months shy of his twenty-first birthday, “tall in stature,… fair among the children of man…” (Gervase of Tilbury) and “…of the most handsome countenance” (Robert of Torigni), staying in what he considered his house arrest, deprived of his vitae fons, the tournaments, he had a real cause to complain. He spent almost entire year 1175 on English soil, not out of his own choice but as the result of the disastrous- at least to him- Great Revolt. And although he had his dearest friend, his carissimus, William Marshal with him all the time, he took the whole situation badly. Earlier in 1175 he was to remark:

… it could be a source of much harm to me to stay idle for so long, and I am extremely vexed by it. I am no bird to be mewed up; a young man who does not travel around could never aspire to any worthwhile thing, and he should be regarded as of no account. (The History of William Marshal, Part I, lines 2412- Tournament by David Crouch) 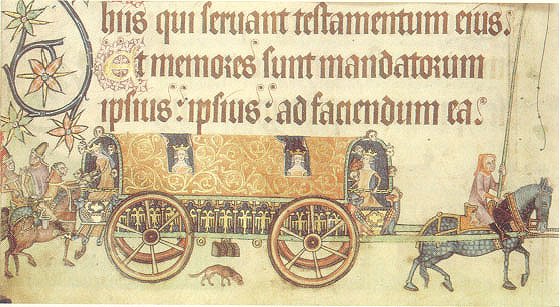 Young Henry did not stay idle and he did travel extensively, but in the company of his father and fulfilling what he considered the mundane and down-to-earth duties of kingship. He and William must have suffered all the discomforts of the always-on-the-move court, which his father became notorious for. It’s a well known image we owe to one of Henry II’s officials, Peter of Blois, who immortalized the king in his invaluable letters. Thanks to Peter we know that the Young King could never be sure when his father’s court was to move from one place to another, must have hated the food- the bread was ‘not neaded, nor leavened, made of the dregs of beer; bread like lead, full of bran and unbaked’- and found no consolation in wine, which was ‘thick, greasy and rancid’. Not that the young Henry and his companions did not love the life on the road. The opposite, they loved it beyond measure, it was their way of living, but they usually traveled in far more luxurious conditions. When they set off for a tournament they spent time in their own company, a band of young and energetic men, not followed by all the clerks, lawyers, limners, ushers, hornblowers, watchmen, guards, archers and huntsmen, Cat Hunters and Wolf Catchers.

What made Henry so unhappy? Let’s follow his moves, step by step, in the course of 1175. The opening months of the year were spent on the Continent. On 2 February after Christmas 1174 (Argentan), he was at , with his father and his brothers, Richard and Geoffrey where the latter two renewed their oaths of fealty. Twenty-two days later he held a conference with his father and his father-in-law, King Louis at Gisors. On 26 February the elder king went to , the younger to , where he must have celebrated his twentieth birthday (28 February)**. Shortly after 25 March he was summoned by his father to , where the latter awaited propitious winds to cross to . Young Henry refused. The two were reconciled on 1 April when they met at Bur-le-Roi and the young Henry paid homage to his father. Straight from Bur Henry went to pay a visit to the court of his father-in-law. On 13 April he celebrated Easter with his father at . On 22 April both kings, the father and the son were at , where they met with Philip of Flanders, who on Good Friday (11 April) had taken a cross. In the meantime Richard and Geoffrey returned to their counties, and Brittany. On 8 or 9 May Henry II, Young Henry and his wife Marguerite embarked at Barfleur and landed at . As Ralph of Diceto reported: “The two kings of , whom the previous year the kingdom had not been big enough to contain, came together and crossed to in a single boat… They ate together at the normal meal times on the same table, and rested their limbs in the same bedroom…” ( The Plantagenet Chronicles, p.140) From now on the two kings, the father and son were inseparable. The situation rather inconvenient for a young man, crowned and anointed king, who, by the 12th century standards, had already reached maturity and yearned to govern on his own. In May they attended the Council (or Synod) of (18 May) and then paid a visit to and prayed at the shrine of (28 May). On Whitsunday (1 June) they held a court at . On 24 June the two kings were at discussing the business of elections. From 1 to 8 July they were at ‘where a council was held considering ecclesiastical vacancies’ (Eyton, p.192). We meet the two Henrys again on 10 August at , where the so called Treaty of Falaise was confirmed in a grand ceremony. By this treaty William of Scotland did homage for to Henry II and Henry the Young King, gave his brother David as a hostage and surrendered the five main castles of : , Jedburgh, Roxburgh, and Berwick. “The was to be subject to the jurisdiction of that of ” and William’s nobles and clergy made their personal submissions to Henry. From both kings returned to the south, where the Young King still accompanied his father. Together they welcomed the papal legate Cardinal Huguzon* on English soil. It seems that Henry was too busy to complain. Still the answer to our question needs to be look for in what the two kings, the father and the son meant by kingship. To put it simply, for the elder Henry being a king meant hard work whereas for the younger it was the more elaborate affair concerning displays of power and grandeur. In his excellent Tournament David Crouch exploits this aspect of the young Henry’s life, underlining that  “… the career of Henry, the eldest son of King Henry II of , cannot be understood unless you fully appreciate how he made the international tournament circuit his very own… [because] the tournament was not just an expensive amusement. Everyone who was anyone in the western aristocracies took to the fields of northern …” No wonder then that Henry found himself so unhappy on the New Year’s Day 1176. He must have felt as the mewed up bird indeed and must have understood that his reputation as the tournament patron and participant suffered due to his prolonging absence. Perhaps he made a few New Year’s resolutions.
On a lighter note then, inspired by Edward II’s New Year’s resolutions on Kathryn Warner's brilliant blog I have tried to guess what the Young King might have decided to do and not to do in the upcoming year.

Stop envying Richard his Roland-like deeds.
Avoid teasing my lord father’s and my own clerks (might be difficult, they are born to be teased).
Remember to stop blaming myself for my lady mother’s confinement.
Call my mewes at least once a week to steady myself.
Ask my lord father to let me go and pray at Compostela (What say you? Is he going to see me through?)
Learn to be as persuasive as Geoffrey, his are the powers of language to throw two kingdoms into confusion.
Try to sire a strong and healthy boy.
Quit flirting with Marguerite’s maids and start flirting with her instead (to fulfill the aforesaid).
Travel to as soon as possible, they miss me there.
Be less partial to Williams.
Tell Johnny to stop bugging me (always wanted to tell him this, just lost my nerve each time)

* Henry II discussed with the cardinal the possiblity to obtain the Pope's consent to his divorce from Henry the Young King's mother, the imprisoned queen Eleanor.

Images of History by Ralph of Diceto in The Plantagenet Chronicles ed. by Dr Elizabeth Hallam. Editions, 2002.

“On the Instruction of a Prince: the Upbringing of Henry, the Young King” by Matthew Strickland in Henry II: New Interpretations. Ed. Christopher Harper-Bill and Nicholas Vincent. Boydell Press, 2007.

“Gerald of : On Henry II and his Sons, from the Topography of Ireland, chapters 49-50” fromThe Historical Works of Giraldus Cambrensis. Translated by Thomas Forester; revised by Thomas Wright. Etext file created for a class by Scott Mcletchie. Reproduced in Paul Hassal, ed.the Internet Medieval Source Book.

The Court at by Christopher Hibbert. Purnell Book Services, 1964.
Eleanor of by Marion Meade. A Pheonix Press Paperback, 2002.
Tournament by David Crouch. Hambledon Continuum, 2005.
The Kings and Their Hawks by Robin s. Oggins. Press, 2004.
The Kings and Queens of  by Richard Oram. Tempus, 2006