1 August proved to be an eventful day for Henry the Young King and his family...

In 1137, long before Young Henry’s arrival into this world, his mother, Eleanor of Aquitaine, newly wedded  to Prince Louis of learned of her father-in-law’s death. Let me cite Marion Meade: ‘… the same day that the bridal party arrived in Eleanor’s ancestral city, Poitiers, Louis the Fat lay dying in Paris…’. Louis the Fat  (1108-37)– French ‘le Gros’- described by Abbot Suger as a man ‘whose spirit was as large as his body’, was a soldier king who managed to subdue unruly barons pillaging the royal lands and improve the efficiency of his administration. Louis VI was followed by his son, Louis VII, Eleanor’s first husband, and Henry the Young King’s future father-in-law.

the course of the Third Crusade, Henry the Young King’s younger brother, king Richard came to the rescue of the besieged . After learning of Saladin’s attack he sailed immediately with the small force. On his arrival he saw Saladin’s standard flying over the town and when he thought was lost, a priest, who jumped from the citadel and swam to the galleys brought the news that the garrison still held. On learning this Richard ‘brought his boats close inshore, jumped into the surf with only the top half of his body armoured,  and began fighting’. Saladin’s forces, taken by surprise, withdrew about five miles inland, but three days later returned and tried to surprise Richard with a dawn attack.  Fortunately the King was warned of that plan and got his troops into battle array. The Turks were reluctant to fight after they had lost the element of surprise and after futile tries to break through Richard’s lines undertaken by the Mameluks (slave warriors from ), they lost enthusiasm for battle. The King accompanied by his ten knights went alone to the attack against an enemy. It was at the Battle of Jaffa that his military genius, personal courage and prowess- the very abilities Richard’s elder brother, the Young King had been apparently jealous of (at least this is how historians see it today)- won him the name of an Achilles, Alexander and Roland. 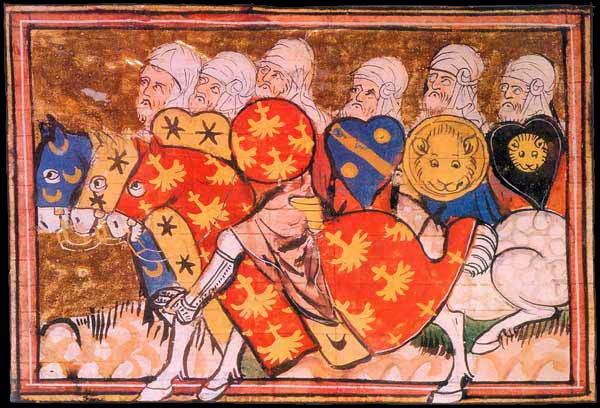 ‘The King was a giant in the battle and was everywhere in the field. Now here, now there, wherever the attacks of the Turks raged most fiercely. On that day his sword shone like lightening and many of the Turks felt its edge. Some were cloven in two from their helmet to their teeth.; others lost their heads, arms and other limbs, lopped off at a single blow. He mowed down men as reapers mow down corn with their sickles. Whoever felt one of his blows had no need of a second.’

After the battle both, Richard and Saladin fell ill. What’s more they were painfully aware that they had failed. Saladin sent a doctor, fruit and snow to Richard. When the worst was over they came to terms, signing a three-year truce on 2 September 1192.

In 1202 Henry the Young King’s nephew, Arthur of Brittany, Geoffrey and Constance’s son was surprised and captured by his uncle John while besieging his grandmother, Eleanor, at . For John it meant the greatest victory he had ever won and was to win, for Arthur it meant the beginning of his end. He was sent to Falaise to be kept in close confinement and was never seen alive again.