The name William had the ring of significance in Henry the Young King’s life. William Atheling, William Marshal, William I of Scotland, all played- directly or indirectly- an important role and all had impact on Henry’s future, but the William who decided about the Young King’s fate in most direct and dramatic way was his own brother, Henry II and Eleanor of Aquitaine’s first-born son and heir, William, Count of Poitiers.

William was born on 17 August 1153, the eldest child of Henry fitz Empress and Eleanor, Duchess of Aquitaine and formerly queen of . His much-anticipated arrival into this world could not have occurred at the more appropriate moment. The very same day Eleanor was struggling in labour, Eustace of Boulogne (b.c.1130), heir to king Stephen was struggling for breath after choking on a dish of eels, the battle he lost. The death of Stephen’s eldest son was used by the partisans of the Angevins and served as the living- or dead- proof that Stephen’s cause was the lost one. For the contemporaries it became obvious that God and the stars- as the chroniclers report- sided with Matilda’s lineage and the Empress’s eldest son, Henry was the Almighty’s favourite*. 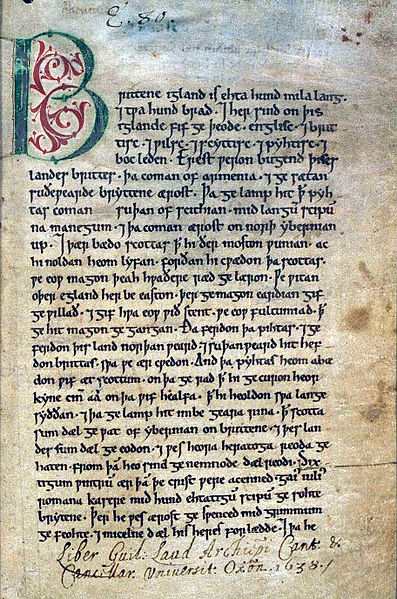 The first page of the Peterborough element of the Anglo-Saxon Chronicle, written around 1150, which details the events of Stephen's reign

For Eleanor, William’s birth was a special triumph of her own. At thirty, with two daughters born in the fifteen years of marriage to Louis Capet, despite accusations that she was unable to produce a son, she was delivered of a healthy boy, future heir to her duchy. She had reason than most to rejoice. And she did. It must have been the very moment when she definitively said goodbye to her gloomy past with Louis and welcomed her bright and promising future with Henry. When William was ten months old, she became pregnant again and on 28 February 1155 gave birth to her second son, Henry. With succession secured, William and Henry’s royal parents could focus on reestablishing order which had been lost during Stephen’s reign. In the opening months of 1155, exactly on 10 April, shortly after Henry’s arrival into this world, both William and Henry were taken to Wallingford, where their father, the king ‘had called together the barons and bishops of the realm to swear allegiance to his eldest son and, in case of William’s death, to Henry as his second heir’, a ceremony which neither of the boys could remember. Not a year passed since the occasion, when little William fell ill and died.

In his chronicle Robert of Torigni, abbot of gives 2 December 1156 as the date of William’s most untimely passing. Robert was the royal familiaris, well acquainted with both Henry II and Eleanor and thus a trustworthy source, but this time he got his dates wrong. William died in the spring of 1156. The princeling was buried in Reading Abbey, at the feet of his great-grandfather Henry I. The abbot of this grand Henry I’s foundation grabbed at the opportunity to gain future royal patronage and wrote in 1160 to Queen Eleanor hoping to convince her of the ‘spiritual benefits that the commemoration of his house could offer her’.
What did the little prince’s quiet passing mean to his family? Unspeakable grief and sorrow to his parents, of course, but to his younger brother Henry? A sudden twist of fate. As the eldest surviving son he became his father’s heir. I often catch myself speculating what would have happened had William survived infancy. No Henry the Young King, no Great Revolt, no wars between the brothers … On the other hand, I cannot envisage Henry II sharing power with anyone, that is why, perhaps there might have been… William the Young King, William III a few centuries earlier, the Great Revolt a few years earlier, more wars between the brothers. There is one thing I am certain of: had William lived, Henry would not have been such a pampered child and perhaps become better politician and judge of human character.

* Eustace was unpopular with the clergy and thus called by the author of the Anglo-Saxon Chronicle "an evil man" who "did more harm than good wherever he went". William of Newburgh, however, pointed out how England after nineteen years of the civil war benefited from his untimely death:

While this dispute between the king [Stephen] and the duke [Henry Fitz Empress] was protracted with doubtful issue, Eustace, the son of Stephen, a most illustrious youth, died prematurely, by the will of God, affording, by his death, an admirable opportunity for laying the basis of a reconciliation between the princes. For, as long as he survived, the parties could never join, and unite in peace, as well on account of his youthful impetuosity, as from certain lofty pretensions, arising from his affinity with the king of France [Eustace married Louis VII's younger sister, Constance]. Both these obstacles to an agreement were thus removed by the death of one person, as it is believed, by the favor of God, who entertained thoughts of peace, and not of affliction, for England, which was torn and exhausted with intestine evils; and men, pacifically inclined, anxiously turned their thoughts to persuade and accomplish a reconciliation -- for the father, being agonized beyond measure at the death of a son, his destined successor, relaxed in his warlike preparations, and listened with more than usual patience to the language of peace.

Kelly, Amy. Eleanor of  and the Four Kings

Crouch, David. The Birth of Nobility: Constructing Aristocracy in  and  900-1300