On 14 June 1170 Henry the Young King was crowned co-king of England and established with a household of his own. The 12th century royal household consisted of two separate departments: the mesnie (military household) which together with the officers of the hall was a lay household and the Chancery which was the clerical household, and although Henry never ruled independantly his household was no different in this respect. Judging by his charters, however, the officers were mostly his father's men, at least in the earliest phase of his reign.*

Henry's military household was fixed neither in size nor in composition (Painter, p.32). The number of knights and lay officials varied according to circumstances: "war and peace, sedentary periods and travel, great festivals or routine times.” (Bertlett, p.131) At the great tournament held at Lagni-sur-Marne in November 1179 to celebrate the coronation of Henry's brother-in-law, there were two hundred knights under the young king's standard. These were ordinary knights and banerets (the knights who fought under their own banners, e.g. William Marshal. John des Préaux). "Whoever was under his [Henry's] command, received twenty shilings a day for each man he had with him from the moment they left their own lands, whether they were on the move or in lodgings.” (The History of William Marshal).

The head of Henry's mesnie was William Marshal (c.1147-1219), the fourth son of John the marshal (the second by his second wife, Sybil, sister of Patrick, Earl of Salisbury), who entered his service around the time of the coronation and was appointed tutor in arms to the newly crowned prince. He was to become not only Henry's mentor, but also his best friend, loyal to the very end (Henry's untimely death on 11 June 1183). Remaining loyal servant, William was to make a brilliant career in the service of, respectively, Henry's father, two brothers, and a nephew. 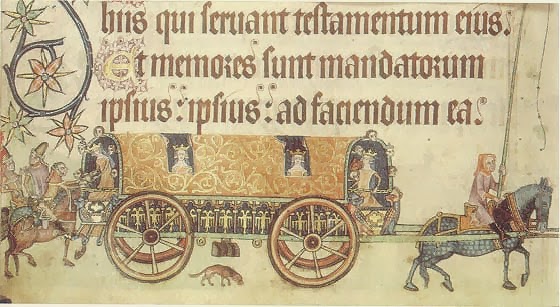 Royal household on the move

Hasculf de St Hilaire (d. before 1180) from the family of Saint-Hilaire-du-Harcouet, member of Henry the Young King’s household before the outbreak of the Great Revolt of 1173-74; accused of exerting a bad influence on the Young King and turning him against his father. The latter dismissed Hasculf and other knights, from his son’s court, which Robert of Torigni in his Chronicle considered one of the direct reasons for the growing estrangement between the father and the son, and consequently for the outbreak of the rebellion itself. Together with the Breton magnate Ralph de Fougeres, Hasculf was one of the chief instigators of the revolt on the border of Normandy and Brittany. He was among the rebels, who surrendered to Henry II at the castle of Dol, Brittany, on 26 August 1173.**

Judhael de Mayenne, like Hasculf de Saint-Hilaire fought against Henry II in Brittany in 1173 and was captured

Adam d’Yqueboeuf, member of Henry's household after the Great Revolt of 1173-74, high in Henry's favour, at the time of the war of 1183 presumably the seneschal and master of the household; the author of The History of William Marshal claims him to be the main instigator of William's downfall

Baldwin de Bethune (d.1212), a good friend of William Marshal; from the house of Bethune in Artois, advocates or protectors of Arras. His family was descended from the Carlovingian Counts of Artois, and ranked among the most potent and illustrious houses in Flanders and Europe. Baldwin was the son of Robert V of Bethune and brother to Robert [VI] and William. He was to become an important member of the court of Henry the Young King's brother, Richard, accompanying him to the Holy Land as one of his commanders and sharing his captivity in Germany (he acted as guarantor for the payment of the king's ransom).

John des Préaux, Peter and Roger des Préaux, and their brothers, William and Engelram "between Rouen and Le Mans there were none better than these five brothers, nor as good...” (The History of William Marshal)

Peter fitz Guy, Henry II's man, the Young King’s seneschal in the 1170s; he was  in charge of domestic arrangements and the administration of servants

Aelward the chamberlain, William Blund, the steward, were the officials appointed by Henry II, who refused to swear an oath of fidelity to Henry the Young King against his father in 1173 and together with Richard Barre returned to the old king.

Ralph FitzGodfrey, the chamberlain. He was in charge of managing Henry's household during the war of 1183. Henry "had great affection for him and trusted him absolutely, for he was the most courtly servant and the most worthy in his household” (the History of William Marshal). He was the one who, acting on Henry's orders, found William Marshal after the latter left the court in the opening days of 1183.

Some of the members of Henry’s Chancery (clerical household):

The head of the royal secretariat was a chancellor. Henry's chancellors were Richard Barre***, Henry II's man, who held the office prior to Lent 1173, but upon the outbreak of the rebellion of 1173-74 he returned the Young King’s seal to the elder king; Geoffrey (c.1152-1212), Henry’s half-brother, the eldestillegitimate son of Henry II; during the Great Revolt of 1173-74 stood firmly by his father’s side and won his name fighting the rebels in England. In the aftermath of the uprising appointed chancellor to Henry the Young King, at least this is what Professor Crouch says in his biography of William Marshal**** Godfrey, the provost of Beverley, and nephew of Roger, Archbishop of York, who was appointed Henry's chancellor in 1176 on payment of 11,000 marks of silver. Archbishop Roger, Gedfrey's uncle is said to have paid the money. Godfrey was drowned while crossing from England to Normandy on 27 September 1177. "The occasion was the sinking of several ships,in which Robert Magnus, magister scholarum of York, and 300 others perished."

Adam of Churchdown, the vice-chancellor of Henry the Young King after the Great Revolt of 1173-74; infamous for writing a letter to Henry II (whom he considered his true lord), in which he informed of all what he had witnessed at his young lord’s court. The writ discovered, the action enraged Young Henry, who, in the aftermath of the rebellion had his household filled with his father’s men. Adam was tried for his life. It was only thanks to the intervention of bishop John of Poitiers that he was saved, although he did not avoid punishment. He was whipped naked through the streets of Argentan and later imprisoned. Henry II himself intervened on his behalf and had him placed in Hyde abbey at Winchester.

Walter the chaplain, Henry II's appointee, together with Richard Barre and two other officials returned to the old king upon the outbreak of the Great Revolt of 1173-74: "Having now gained his opportunity, both as to place and occasion, the king, the son, left his father and proceeded to the king of France [his father-in-law]. However, Richard Barre, his chancellor, Walter, his chaplain, Ailward, his chamberlain, and William Blund, his apparitor, left him, and returned to the king, his father.” (Howden, Annals p.367)

Gervase of Tilbury, Henry the Young King’s most ardent admirer and chaplain in the 1180s; later in service of Henry’s nephew, Otto IV (1175-1218), Holy Roman Emperor, who made him the marshal of the kingdom of Arles and for whom Gervase wrote his most famous work, Otia Imperialia (in which he praises his late lord and Otto's uncle, Henry the Young King).

These are the men of Henry's entourage I have managed to find in the available sources (and my access to them is sometimes limited). If Henry's readers have noticed that someone's missing, please let me know. I would be most grateful.

**According to Roger de Hoveden Hasculf was not taken prisoner with other rebels, who shut themselves in the castle of Dol and later surrendered to Henry II, but outside the castle walls together with the sixteen other knights "remarkable for their valour” after the skirmish that took place a few days earlier.

*** Here's what Professor Crouch says about Richard: "of a Buckinghamshire knightly family, [he] had received promotions to archdeaconries from Henry II, and had been one of his ambassadors to the Pope on the dangerous mission to Rome after the murder of Becket in 1170.” (Marshal, p.42)

**** In my research on Geoffrey I have not come across a single mention about it. Perhaps Professor Crouch meant Godfrey (Geoffrey) the provost of Beverley, or perhaps Geoffrey, Henry's brother, was his chancellor only for a year, during Henry's involuntary stay in England (1175-76)? Here I can only speculate.