Happy New Year to Henry the Young King readers. May this coming year be a good one and see all our hopes fulfilled. It has already had an auspicous beginning: 21,000 views of our blog and a lovely New Year gift for our readers from a fellow Sharon Kay Penman's fan, John Hinson. John has kindly agreed to share with us his impressions after reading Devil's Brood, the novel in which Henry the Young King appears as one of the main characters. John wanted me to say that he has only been reading Miss Penman's books for a year now having an interest in history, but no in depth knowledge of the times. The author however has educated him so much that he feels confident to stand up and talk to a roomful of people about Medieval Europe! Over to you John....

Devil’s Brood was a truly exciting and educating read. Starting in a remote coastal outpost of medieval Wales, it chronicles the life of Henry II following the scandal of the murder of Thomas Becket. I found myself thoroughly absorbed in the events that were so carefully and meticulously related to us by the author. The characters as per normal for a Penman novel were larger than life, making you feel as though you are actually there in person. 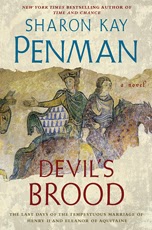 The story of the young brood of children growing and their internal rivalries was the central theme of the book. Time and attention was devoted to each of the children and their personalities were developed as if the author had actually been there to witness it herself. I was shocked by the level of betrayal as each of Henry’s flock rebelled and although I know this was historical fact, my sympathies were with poor dad for most of the time as the errant princes plotted his downfall. King Henry was treated sympathetically by the author, each betrayal leaving a scar upon him which was all too easy to feel for the reader. The long incarceration of his Queen, Eleanor of Aquitaine, was studied in depth, from the first turning of the lock in her cell to the eventual release 16 years later by the new King, her son Richard. There were plenty of moments of humour which I enjoyed – even in the midst of Hal’s deathbed scene, he still had the levity to comment ‘Sorry to take so scandalously long to die. Geoff would say I’d be late for my own funeral…’ I also thought the wedding night of Geoffrey and Constance was hilarious, with the ritual of rowdy male onlookers making for some great witty banter and then when they did eventually get some time alone in bed, very sensitively observed. And I loved the way that when a momentous event such as the death of the ‘young king’ died, the author writes a short paragraph explaining the actual historical fact and the impact it had upon the times. I was impressed by how the author made everybody 3D and especially the Lionheart, who grew and grew before our eyes, with a reputation which would soar away into never to be forgotten legend. He was immense and even though I was disappointed at how he collaborated against his father, he was still written by the author as a lion amongst his peers. The treatment of John was less sympathetic as he was portrayed the son unloved by his mother, skulking in the shadows, biding his time. The end for King Henry was quiet and sad as he realised even John, the son he loved most of all, his last hope, had rebelled too – the desperation he felt was conveyed to the reader with such solemnity that you could feel his private pain too. Another favourite scene of mine was towards the end when Will Marshal, the bravest knight and certainly the most loyal, faced King Richard – a meeting which brought together two of the greatest warriors in medieval history. The Marshal had managed to spill Richard from his horse whilst defending King Henry and as they faced each other this time, Richard ‘forgave’ him and took him into his service, a personal highlight for me as I think they found in each other a friendship which would last forever.

All in all, the Devil’s Brood was a fast paced, exciting drive through a fascinating period of history. Sharon Kay Penman certainly ensured that these long gone times of Great Kings and Queens, invincible warriors and dreadful betrayal were brought to the reader in a blaze of colour. Not only was it great entertainment but also very educational, delivered in such an engaging manner where pages just melted quickly away.

Thank you so much for sharing, John! Careful readers of our blog may still remember that my friend CrazyCris also shared her thoughts on the novel some time ago. You can read her review here. Whereas the answer to our Christmas riddle can be found here.