27th March 1168 must have been one of the darkest days of William Marshal's life. According to Eyton*, on this day William's uncle, Earl Patrick of Salisbury, was killed in an ambush in Poitou, whereas William himself received a bad wound in his thigh and was taken captive, with no prospects of winning his freedom. In the long run, however, that day's events turned out to be the most fortunate for him. He could not have forseen that he had just taken the first step on the road to his brilliant career. 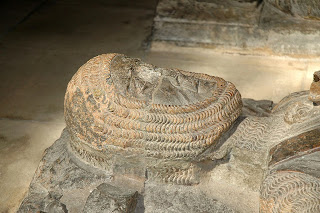 The effigy of William Marshal in Temple Church, London (photo: Kjetilbjørnsrud, via Wikipedia)

William's maternal uncle**, Patrick, Earl of Salisbury, was Henry II's staunch supporter and one of few king's men of Anglo-Norman origin to hold post in the lands of Queen Eleanor. The king named him commander of his military forces in Aquitaine by 1163. In this he was given priority over Theobald Chabot, lord of Vouvent and the Poitevin constable of Aquitaine.

On that fateful day, Patrick, together with his twenty-one-year-old nephew and a small force, was escorting Queen Eleanor from castle to castle when they were surprised by the Lusignan brothers. Shortly before Henry II had quelled the rebellion of which the latter had been chief instigators and took the Castle of Lusignan. He went to confer with Louis VII leaving his queen and the earl in charge of the province. Geoffrey and Guy***, two of the brothers, ambushed the party, and whereas the queen managed to reach the safety of a nearby castle, the unarmed earl Patrick was struck from behind and died on the spot under his nephew’s eyes, the most shocking event by the 12th century standards. Thanks to The History of William Marshal we get the glimpse of the pandemonium that followed:

"When the Marshal saw the blow delivered that killed his uncle, he almost went out of his mind in his grief, because he was unable to reach in good time the man who had killed him; he would have gladly avenged his death. He did not wait until he was fully armed.With only his hauberk on, but otherwise unarmed, he launched himself into a violent attack. With the lance he held in his hand he went to engage the first of them and knocked him off his horse. He was bent on exacting violent revenge; never was a starving lion so savage towards its prey. No man did he meet in his path who did not suffer a painful and ignominious fate. He would have taken full revenge for the Earl’s death, but the other side overwhelmed him with their lances and killed his horse under him. And even when he had hit the ground, he did not hold back for a minute. There was no way that he could find to escape them. I believe that more than sixty of them attacked him all at once; they all wanted to overwhelm him and all strove to take him.” (You can find the whole story here)


Enraged William fought bravely, but after receiving wound into his thigh he was captured and held for ransom****. To William, being a landless knight, the situation must have seemed hopeless. Fortunately the Queen, having learned of his predicament, came to his aid. She paid the ransom and ‘to recompense him for his sufferings, gave him money, horses, arms, and rich vestments’ (Painter, p.27). Moreover she endowed an anniversary mass to be said annually "for the soul of Earl Patrick who died in our service” at the church of Saint-Hilaire, Poitiers, where William's uncle was laid to rest.

We can safely assume that the origins of William’s close relationship with the House of Plantagenet ( that was to last until his death in 1219) and his rise to power and fame lay in the aforementioned events. Shortly afterward, in 1170 , he was appointed tutor-in-arms to the newly crowned Henry the Young King.

* Eyton gives 27th March as the day, whereas Ralph Turner in his biography of Eleanor says the incident occured in late March or early April.

*** Geoffrey joined the Young King's household on the occasion of the war of 1183, whereas Guy, who according to Roger of Howeden "slew” Patrick, was banished from Poitou by the "enraged” king Henry. He took the Cross and went to Jerusalem, where he remained in the service of King Baldwin IV [the Leper] only to become king of Jerusalem himself in 1186.

**** The author of the History says that William would have stood his ground and not have been seized, had it not been for the “outrageous act”: he was surprised from behind by a knight who jumped over the hedge [apparently William was fighting with a hedge behind his back] and pierced his thigh.

The World of Eleanor of . Literature and Society in  between the Eleventh and Thirteenth Centuries ed. by Marcus Bull and Catherine Leglu. The Boydell Press, 2005.