On 11 April 1182 a meeting was arranged at La Grange St Arnoult between Senlis and Crépy to discuss and confirm Vermandois inheritance after its rightful heiress, Henry the Young King's cousin Elisabeth of Vermandois died childless on 26 March. The present were: Elisabeth's husband Count Philip of Flanders, Elisabeth's younger sister Eleanor of Beaumont-sur-Oise, Henry II of England, Henry the Young King, Philippe II Auguste, Countess Marie of Troyes [Champagne], Count Baudoin V of Hainaut, Duke Hugh III of Burgundy, Thibaut of Blois, archbishop Guillaume of Reims, Count Etienne of Sancerre, Count Raoul of Clermont, Count Raoul of Coucy, Henry of Albano, the papal legate and many others (nobles and bishops).  It was a rare occasion when we can be one hundred per cent certain where the Young King spent his time. Plus it was a real family reunion. Henry met his half-sister Marie, his cousin Eleanor, his brothers-in-law, Philippe Auguste and Thibaut of Blois. Henry II met his cousin Philip of Flanders. Marie of Champagne met his two half-brothers, Henry the Young King and Philippe Auguste, and her three brothers-in-law, Thibaut of Blois, Etienne of Sancerre and Guillaume of Reims. Philippe Auguste met his uncles, Count Thibaut, Count Etienne and Archbishop Guillaume, plus his father-in-law, Count Baudoin.

I am sure that Henry the Young King did not realize that the day prior to the above-mentioned conference, being the 10th of April, marked the 27th anniversary of another assembly. On 10 April 1155 took place, what can be called, the first official meeting between Henry [the future Young King] and the barons and nobles of the realm.  On that day, Henry's father, freshly crowned king Henry II had both his sons, William (b.17 August 1153) and Henry (28 February 1155) taken to Wallingford, where he called  together the nobles so that they could swear allegiance to William and, in case of his death, to his younger brother Henry. As we all know William died the following year, a few months shy of his third birthday. As for the place itself, Wallingford had a symbolic meaning for the young Angevin dynasty, during the civil war [Anarchy] being a critical castle for them. Not only had it been held by Brian FitzCount, one of the staunchest supporters of Empress Matilda, but, what's most important, it was there where in November 1153, King Stephen (c1096-1154) downhearted after the deaths of his wife, Matilda of Boulogne (d.1152) and his eldest son, Eustace (d.1153) had renounced his lineage's claim to the English crown, agreed to retain the throne until his death and recognized Henry Fitz Empress as his heir. 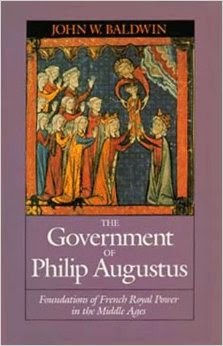 Also on the 10th of April, in 1179, Henry's father held a great council at Windsor, where "the establishment of the circuit for the justices in eyre was done by the magnates' common counsel 'and in the presence of the king, his son'.
Written by Katarzyna Ogrodnik-Fujcik