All those, who saw you, Bretons and Irishmen, Englishmen and Normans, Aquitainians and Gascons, should be sad… And Poitou suffers, and Maine, and Tours. As far as Compiegne let France weep without ceasing, and Flanders from Ghent as far as Wissant. Even the Germans weep!... When the Lorraines and the Brabancons go tourneying, they will mourn because they don’t see you! (Bertran de Born bemoaning the Young King's death)

832 years ago today, Henry, the young king of England, aged twenty-eight (born on 28 February 1155), died at Martel, Limousin. In the closing days of May he had contracted dysentery, called "bloody flux" and did not survive its merciless attack. Henry had been co-king of England since 1170, when his father, King Henry II, had him crowned at Westminster Abbey. Unfortunately the elder king was unwilling to share power and responsibilty with his eldest son and heir, thus pushing the latter to rebel against him first in 1173, then ten years later, in 1183. I am still working on a detailed account of Henry's 1183 campaign. It should be ready soon. In the meantime, let me re-post the tribute to the Young King I wrote two years ago to commemorate his untimely passing. 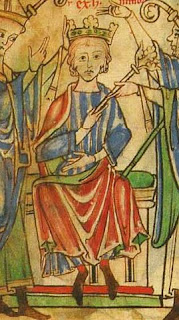 Saturday, 11 June 1183. Martel. The spring in the valley of the  lazily drifts into summer. A young man, with a sapphire ring fervently pressed to his lips, lies dying in the house of Etienne Fabri’s. He finds himself far from his family, among ‘quite barbarous people’ in , with only a few faithful companions at his side. That young man happens to be the King of England’s son and heir. Contemporary chroniclers refer to him either as Young Henry, Henry the Younger, the Young King or Henry III. He does not know that since he is destined to predecease his father, his name will vanish somewhere in a dim and distant… future, almost utterly lost to posterity.
Ironically, it is Henry’s untimely passing - the best documented moment of his life - that he is mainly remembered for. Additionally, the actions surrounding his death serve as an invaluable source of information concerning the rituals performed at the twelfth-century deathbed. From his example we can learn a lot about medieval ways to ensure the soul's safe passage to heaven. Henry the Young King, ‘his life suddenly cut off like a thread’, died ‘in the flower of his youth’, aged twenty-eight, in the region called Turenne in Gascony, at Martel, on Saturday, the feast day of St Barnabas the Apostle.

Let me take a closer look at the events preceding the Young King’s death on the 11th of June: In the opening months of 1183 Henry was busily occupied with wresting control of the Duchy of Aquitaine from his younger brother Richard. With Geoffrey, Duke of Brittany, another younger brother, and an ardent support of Poitevan barons discontent with Richard’s iron rule, the Young King was desperate to win a portion of the family domains for himself. He stood in opposition not only to Richard, who at that time was facing a formidable French-Burgundian-Toulousain coalition backing up the Young King and his rebels, but also to his father king Henry II of England, who hastened to Richard’s rescue. It was the second time that Henry took up arms against his father, the King. The underlying cause of this revolt was the same as in 1173: he did not want to be a king only in name. In 1170 his father had him crowned a king-associate of England, but in reality, the Young King had no land of his own and no power to rule, the great number of his charters from that period being only either homologues or confirmations of his father’s charters, and his household consisting of the officials of his father’s choosing. In fact, his younger brothers, Richard, Duke of Aquitaine and Geoffrey, Duke of Brittany enjoyed more real power than he, the eldest one. Thus, in taking over , Richard’s maternal inheritance, the Young King saw his chance of gaining real authority and financial independence. With his mighty allies he might have achieved this very goal had he not contracted bloody flux (dysentery) and died on 11 June, aged 28, his passing stirring up the outpouring of universal grief as he was the only member of his family popular in his lifetime. Matthew Strickland in his ‘On the Instruction of a Prince: The Upbringing of Henry, the Young King’ makes an interesting observation, namely ‘while Richard I’s death provoked  the outpouring of grief for the loss of the champion of  Christendom, it is worth remembering that had it been Richard who had died in 1183, he would have left a reputation as a harsh, even tyrannical ruler, as much as that of a fine warrior’.

In a letter of consolation addressed to Queen Eleanor, the Young King’s mother, a royal official, Peter of Blois, expressed his conviction that Young Henry ‘was translated from shadows to light, from prison to kingdom, from mortality to life, from exile to fatherland’. The Young King himself, as he lay dying in Etienne Fabri’s Maison, was not so sure about his future whereabouts. Shortly before he fell ill he had not only betrayed his father, but he had also pillaged the most sacred shrines in Western France (St Martial near Limoges, Grandmont and St Amadour at Rocamadour) in order to pay off his mercenaries. Small wonder he was now trembling with fear at the very thought of facing his Maker. Taking into account the mechanisms working in the twelfth-century mind, he must have believed himself a condemned criminal, and his illness a divine punishment. For this reason he sought rescue in all possible ways of repentance. On 7 June, when it was already clear that he was not going to survive, he prostrated himself naked on the floor, and before the crucifix confessed his sins to Gerald, Bishop of Cahors. As death drew near he had a hair shirt put on him and asked to be dragged out of bed by a noose wound round his neck. ‘By this cord,’ he said, ‘do I deliver myself, an unworthy, culpable, and guilty sinner, unto you, the ministers of God, beseeching that our Lord Jesus Christ, who remitted his sins to the thief when confessing upon the cross, will, through your prayers, and through his ineffable mercy, have compassion upon my most wretched soul!’ According to his wishes, he was then placed on a bed of ashes on the floor, with stones under his head and his feet, ‘in the manner which  prescribed for monks’. On 11 June, surrounded by churchmen, with Bernard, Bishop of Agen administering the last rites, he confessed again, first privately, then in public. There was one more thing troubling the Young King in the last hours of his life: some time before, he had taken the cross. Now regretting the lightness he had done it with, he committed his crusader’s cloak to William Marshal, asking his friend and most faithful companion to take it to the Holy Sepulchre in , in his stead. He also sent word to his father, begging him to come so that he could ask his forgiveness, but the king, suspecting another trap (earlier in the spring he narrowly escaped death while trying to negotiate with his sons), refused to come, instead sending a letter and a sapphire ring as a token of forgiveness. The Young King dictated a reply asking, in the words of the twenty-fifth Psalm (verse 7), ‘do not remember the sins and offences of my youth, but remember me in thy unfailing love’. Then in an equally poignant gesture, he kissed the ring and, furnished with the viaticum of the most holy Body and Blood of the Lord, he died.

Despite the offences of his youth, he died a good death, having gone to ‘extremes of self-abasement and penitence’ to atone for his sins. Thanks to the fact that the Young King ‘packed as much repentance into his deathbed as he could’, we can learn a lot about the rituals surrounding medieval passing. What happened after 11 June is enough for another story, for scarcely ever in history did a royal body encounter as many adventures after death as the body of Henry the Young King did on its way north from Martel to Rouen. I am going to discuss its ups and downs in another post.

Ralph of Diceto Images of History, in the Plantagenet Chronicles, ed. by Dr. Elizabeth Hallam. , 2002.

Roger of Wendover’s Flowers of History Vol. II translated by J. A. Giles

Strickland, Matthew. “On the Instruction of a Prince: the Upbringing of Henry, the Young King” in Henry II: New Interpretations. Ed. Christopher Harper-Bill and Nicholas Vincent. , 2007.

Crouch, David. “The Culture of Death in the Anglo-Norman World” in Anglo-Norman Political Culture and the 12th-century Renaissance Ed. by C. Warren Hollister. , 1997.