"The Young Monarch in Waiting". Thomas Asbridge on Henry the Young King

I am radiantly happy to announce that Henry the Young King is doing well. Not only was he portrayed from a new and refreshing perspective by Thomas Asbridge in his biography of William Marshal*, but also had a radio programme dedicated to him, with Dr Asbridge interviewed. Of course, I am looking forward to Professor Matthew Strickland's biography, which is going to be ""the first full length study for a century of the eldest son and principal heir of Henry II". Fingers crossed for its successful publication. 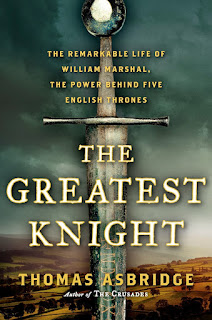 
As for the interview itself, I am not going to discuss it in detail - I leave it to you to listen and draw your own conclusions. Let me just mention a few things of crucial importance. People do tend to look back at Henry as....

Insignificant figure, a playboy on a tournament circuit

...but Thomas Asbridge probes deeper. Firstly, he tries to answer what kind of relationship Henry and William initially developed and how they spent their time. If we take them at face value, Dr Asbridge argues, they were doing nothing more but rushing around the tournament circuits of Northern France. Apparently, however, there was more to this and Henry and William also focused on things important such as political power and military might, something both David Crouch and Matthew Strickland had discussed in their works before. In the light of it, Henry's rebellions were not only the childlish tantrums as many historians tend to see them today, but serious plays for power. We can only speculate what would have happened had Henry survived the military campaign of 1183.

Of course the crucial issue was raised, namely why Henry, "technically a fully-fleshed king of England, because he underwent formal coronation twice", does not have a number of his own. According to Dr Asbridge, the answer is simple, Henry predeceased his father and always had been a young monarch in waiting. "Henry II was unwilling to give his son any real power or territory - over time the young king became increasingly anxious and impatient about it". And although Henry was called Henry III when he lived, his sudden death changed everything. I like the way Mr Asbridge explained what other hsitorians seem not to understand - they tend to call the Young King the rebellious son, second Absalom, idle and vain, whereas it was - if we are to look at it as Mr Asbridge does - simply a matter of how long king-father lived after having his son crowned. If he died relatively quickly afterwards, as for example Louis VII of France did, it was okay, he was praised for being wise and perspicacious enough to secure the throne for his heir and avoid succession crisis; if he, however, lived on for years as Henry's father did, the things might get complicated and, as we know in case of Henry, they did. Although - thank you Mr. Asbridge for mentiong it - there was a moment in this story when it seemed that Henry II's decision to have his son crowned when he himself was still alive might have turned out to be a work of a genius - two moths after his son's coronation Henry II fell seriously ill. His subjects thought he was going to die. In the light of it, the timing of young Henry's coronation seemed perfect. The daddy, however, recovered and was to live for another 19 years, outliving his eldest son and heir. Henry II's method to keep his ambitious sons at bay was to keep them hungry and begging. This was especially visible when the young king was concerned - the younger sons, Richard and Geoffrey, enjoyed more freedom in ruling their inheritance, Aquitaine and Brittany.

Additionally and most crucially, Mr Asbridge says, there was an internal pressure on figure like Henry the Young King and that came from his own household knights who expected him to support them and provide for them, to get rewards for their loyal service - and at the time rewards meant lands. Lands Henry did not possess. I do agree - some of them must have pressed him hard, urging to sort the things out with his father, the older king, which Henry tried to do repeatedly over years. I would go a step further: Henry's mesnie is one thing, the other is that even greater pressure, although of a different kind, came from his own father, who apparently had been waiting for the perfect moment to hand over the reins of government to his eldest son. I'm afraid that this very moment would never come, not as long as the old king lived. The pressure on royal heirs was always enormous - we are fully aware of that - but in case of Henry it must have been tremendous and often intolerable. Let us not forget that he had not meant to be king - had his elder brother William lived, Henry, the second in line, would have probably become the duke of Aquiatine. But three-year-old William passed away, leaving his parents distraught - after all in their he was the living proof that the House of Anjou had the God Almighty on their side. After William's death it all fell upon Henry, his father's great expectations mixed with fear of losing him as well. Henry II must have had two goals: to protect his heir and to make him a perfect king. Great pressure to bear.

But enough, the rest you will hear from Dr Asbridge himself. I hope he will succeed in convincing you that, here let me quote, "Henry the Young King deserves our recognition far more than he has generally achieved by most of the professional historians and certainly in popular imagination".

* Elizabeth Chadwick, who is an expert in William Marshal and his family, wrote a great blog post in which she discusses in detail different non fiction works on William. Thomas Asbridge's The Greatest Knight, the most recent addition, is one of them. I was happy to read that Ms Chadwick considers the portrayal of the Young King its greatest merit. I guess that despite all the errors Mr Asbridge made when it comes to William himself, I will read the book because of Henry :-)