Lady, because of you I am pensive night and day here in Normandy; I dream that you always smile at me in beauty and happiness (from Casutz sui de mal en pena)

Thus wrote the famed bellicose troubadour Bertran de Born after he spent some time in Argentan, Normandy in the fall of 1182, where Henry the Young King's father, Henry II held a great court. Bertran who accompanied his overlord, Henry's younger brother Richard [the future Lionheart] complained that he was nearly killed by the "boredom and vulgarity of Argentan", but "the noble, lovable body and sweet, mild face and good companionship and conversation of the Saxon lady" protected him. Who was "a frisky, gay Elena", the Saxon lady of "such a loving look" that saved Bertran's life?

Matilda, the younger sister of Henry the Young King was born as the eldest daughter of King Henry II of England and Eleanor of Aquitaine in June 1156, fifiteen months after her brother Henry (b. 28 February 1155) and three years after her brother William (b. 17 August 1153). The latter's premature death must have coincided with Matilda's arrival. The girl was named to honour her paternal grandmother, the Empress, and christened by Theobald, Archbishop of Canterbury at Holy Trinity Aldgate. Altogether Henry the Young King was to have three younger sisters, but it was Matilda, fifteen months his junior, with whom he spent the greater part of his early years. They were Eleanor and Henry's two eldest survivng children and from a very tender age accompanied their mother on her travels between England and the family continental domains (Matilda's first sea voyage took place when she was but one month old).


The records made it clear that Matilda spent most of her early childhood with her mother and brothers. She did not see much of her father, who at the early stage of his reign was always busy consolidating power over his vast domains. Frequemt absences from England worried Henry's subjects to the point that the Archbishop of Canterbury felt obliged to remind the king in a letter of his kingdom and his children "from the sight of whom scarce even the hardest-hearted father could any longer withhold his gaze" (John of Salisbury). The letter was written in 1160, so the children were Henry, Matilda, Richard (b. 8 September 1157) and Geoffrey (b. 23 September 1158). As king's eldest daughter Matilda had an important role to play in her father's dynastic politics. In spring 1165, Rainald, archbishop of Cologne met with Henry II and proposed the marriage between her and Heinrich der Löwe [the Lion], Duke of Saxony. Heinrich (born c. 1130), who was the son of Heinrich the Proud and Gertrude, daughter of Emperor Lothar III, represented the Welfs, the greatest German family after the Hohenstaufen emperors. His and Matilda'a union was to be of great political significance and culminate in the alliance between Matilda's youngest brother John and her son Otto IV in the opening years of the 13th century. The agreement was reached and the marriage contract signed near the end of the year. Matilda's marriage portion was set by the covenant. According to feudal custom, one of three occasions, next to the knighting of an eldest son or his own ransom if taken captive on the battlefield, on which a lord could levy a common tax or an aid, or tribute against each of his subjects was the marriage of his eldest daughter. And thus the contracted marriage between Matilda and Duke Heinrich the Lion of Saxony prompted the 1166 survey. Prior to her departure for Germany in fall 1167, Matilda was staying with her mother, who was Henry's regent in Anjou and Maine from May 1165 till March 1166, while Henry was in England waging campaign against the Welsh. He joined his family to celebrate Easter 1166 at Angers. Some time afterwards Eleanor returned to England, taking Matilda with her. They spent much of 1167 - several weeks at Winchester - on preparations for Matilda's marriage. 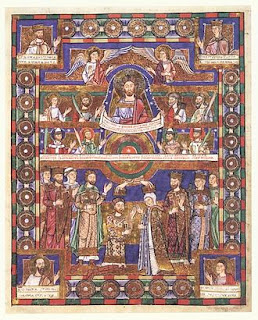 Coronation of Matilda and her husband in the Gospels of Henry the Lion comissioned by Heinrich in the 1170s and produced in the monastery of Helmarshausen, one of the leading schools of manuscript illumination in Germany. The ducal couple presented it to the church of St Blaise, Brunswick, founded by Heinrich upon his return from the Holy Land (photo courtesy of Wikipedia)

Matilda, who turned 11 in spring 1167, departed for Saxony late in September the same year. Her mother accompanied her as far as Dover. The princess was escorted by Earls of Arundel and Striguil and many others. She took the same road as her paternal grandmother 50 years before her, when she moved to Germany to marry her first husband, Heinrich V. Matilda was married to the Duke on 1 February 1168. At the time of their wedding he was in his late 30s, so the same age as her father, his first marriage annulled on grounds of consanguinity. What do we know about Heinrich? Rahewin, the co-author of the Deeds of Frederick Barbarossa offers a vivid description of the duke as a ruler of Bavaria (which he received from the Emperor). Most of it sounds like a conventional praise, but also gives us a hint of the man Matilda was married to: 'Learning the character and habits of its men, by his great vigilance and wisdom he soon achieved such fame that, after establishing peace throughout all Bavaria, he became exceedingly dear to the good and a source of great terror to the bad. So, fearing him in his absence as though he were present, no one dared break the laws of peace which he had established upon pain of death.' (p.278) Despite her youth, Matilda often administered her husband's vast lands during his absences, such as his pilgrimage to the Holy Land in 1172-73. She also played an instrumental role in establishing the cult of St Thomas Becket, her father's one time adversary, in her duchies through patronage and by doing so, demonstrate to the world that her father had recieved the martyr's forgiveness. 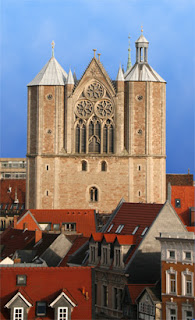 
In 1180 crisis arose between Matilda's husband and Emperor Frederick Barbarossa. As a result the former was deprived of his fiefs and sent into exile. The banishment was to last three years and even after this period the duke needed the emperor's approval to return. The ducal couple left Saxony the following year to seek refuge at Henry II's court: 'as the time came near when the duke had to leave his land and kindred, he and his wife , with his sons and daughters, and with the counts and barons and great men of his land, left their land and kindred and came to Normandy, to Henry, king of England, the duchess' father, who received them joyfully' (Roger of Howden. 2, p. 269). Soon afterwards Heinrich's men returned to Saxony, whereas he himself set off on pilgrimage to Compstella, leaving Matilda in her father's care. She was pregnant at the time. Upon Heinrich's return they joined Henry II's 1182 Christmas court at Caen and witnessed the heated argument that arose between Matilda's brothers, Henry and Richard. Apparently Matilda and Heinrich spent the whole of 1183 in the Angevin continental domains, watching with concern as her family was being torn apart by the war between Henry the Young King and Geoffrey of Brittany on one side and Richard and Henry II on the other, the strife which culminated in Henry the Young King's untimely death on 11 June. We can only guess how Henry's passing affected the sister who had spent most of his childhood with. 1184 saw Matilda with child again. Curiously, this son, William, was born in the ancient English capital Winchester and was to become the ancestor of the Hanoverian kings of England. Soon after his arrival his parents received the much awaited news - Henry II's attempts to secure their return to Germany had borne fruit - Frederick, persuaded by the Pope, allowed them to come back, which they did in October 1185, leaving three of their children behind. Richenza, Otto and baby William were to be raised at their grandfather's court. Unfortunately, Heinrich was to be exiled again in 1188. 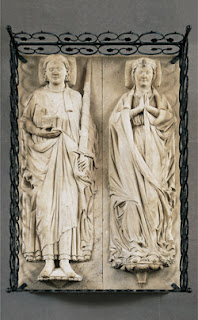 
Matilda died in June 1189, aged 33, shortly prior to her father's death on 6 July. She was buried in the Brunswick Cathedral. Heinrich was to outilve her for six years. He died on 6 June 1195 and was buried next to her. They had at least six children: Richenza/Matilda (b.1172), Hienrich (b. 1173/74), Lothar (b. 1174/75), Otto (b. 1175/76) and William (b. 1184), but also a few more who did not survive infancy. The eldest daughter, Richenza/Matilda married Count Geoffrey of Perche, by whom she had a son Thomas, who met his death at the Second Battle of Lincoln (20 May 1217), being the only notable casualty of the engagement. Her second husband was Enguerrand III, Lord of Coucy. The eldest son, Heinrich was to become Count Palatine of the Rhine in 1195 and the younger son, Otto the only German king of the Welf dynasty and Holy Roman Emperor in 1209.


Back to Matilda herself, was she really "a frisky, gay Elena" from Bertran's sirventes? There may be a grain of truth in the troubadour's words, especially when it comes to her good looks, but one the other hand, Matilda was the epitome of religiousness and conjugal fidelity - not without reason she was called "die Fromme" [the pious"] by her subjects - so it would be groundless to assume that there might have been any impropriety in her behaviour towards Bertran. Still, we have to admit that the duchess emerging from Bertran's songs sounds far more interesting than "die Fromme" of her subjects.


For further reading and... watching:

I highly recommend this fascinating documentary on Frederick Barbarossa and Heinrich der Löwe.
Interesting posts on medieval Brunswick and Gospels of Henry the Lion here and here.
Interesting post on Matilda here.

The Deeds of Frederick Barbarossa. Translated and annotated with an introduction by Charles Christopher Mierow with the collaboration of Richard Emery.

Bartlett, Robert. England Under the Norman and Angevin Kings 1075-1225

Keefe, Thomas. Feudal Assessments and the Political Community under Henry II and His Sons