The Battle of Lincoln and Other May Anniversaries

'Lords, your sworn foes have placed themselves behind their walls. That is according to God's plan. This day he gives us great glory. It is a preliminary victory for us that the French, who always have been the first at a tournament, hide from us. Let us do the right, for God wills it'
William Marshal, the 1st Earl of Pembroke, to his men at Lincoln (The History of William Marshal in Sidney Painter, p. 216)

On Saturday 20 May 1217, Henry the Young King's one time military tutor and best friend, William Marshal, the regent of England at the time, won a decisive  and almost bloodless victory for the royalist forces at Lincoln during the First Barons' War. The leader of the French/rebel forces, Count Thomas of Perche ( the great-grandson of Henry II and Eleanor of Aquitaine and William's own relative), the English knight Reginald Croc and unknown serjeant were the only men who perished in combat, although later the folk of the countryside slaughtered many of the fleeing infantry. Credit for injuring Louis of France's cause must be given where due - William knew how to make the most of the errors made by both the French prince and the count of Perche, he took the right decisions and justified the well-deserved reputation as a skilled battle commander and greatest knight. Although well in his sixties, he encouraged his knights and soldiers not only by word, but also by example, leading them fearlessly into battle. I wonder whether when engaged in the fight in the narrow streets of Lincoln he spared a thought for his first overlord, Henry the Young King, and the old good tourneying days - the whole affair was more like a grand tourney than a pitched battle, although, as Richard Brooks points out in his Knight Who Saved England, 'The single most decesive battle in English history, after Hastings, had been won at less cost in human life than many tournaments' (p.19) 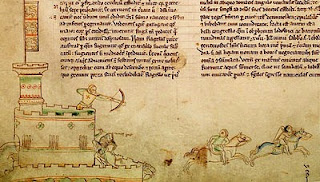 A 13th-century depiction of the Battle of Lincoln

Here are a few more May anniversaries:

4 May 1162: Death Bishop of London, Richard II de Belmeis, who, according to Ralph of Diceto, baptised the Young King in March 1155. This, however, needs a separate post, for when Henry's christening is concerned, we have two candidates, the other one being Archbishop of Canterbury, Theobald of Bec.

8/9 May 1175: 'The two kings of England, whom the previous year the kingdom had not been big enough to contain, came together and crossed to England in a single boat on 9 May. They ate together at the normal meal times on the same table, and rested their limbs in the same bedroom...' (Ralph of Diceto in The Plantagenet Chronicles, p. 140). Henry the Young King, his father and Queen Marguerite embarked at Barfleur and landed at Portsmouth, after the father and the son were reconciled on 1 April and the younger king paid homage to the older one at Bur-le-Roi in the aftermath of the Great Revolt of 1173-74.

c. 12 May 1172: shortly after Henry II's return from Ireland, Henry the Young King, who was staying in England with his queen during his father's absence, accompanied the latter one to Portsmouth where they embarked and landed at Barfleur. By 17 May they were at Savigny, where Henry II was meeting the papal legates, Theodine and Albert, who had been sent to negotiate his absolution for Becket's murder. Because they could not come to terms, the king, and probably his son with him, left Savigny. Henry II later agreed to the legates' demands and invited them to Avranches. The Young King must have accompanied him all the time.

12 May 1191: Henry the Young King's younger brother Richard I (b. 1157) married Berengaria of Navarre (b. c.1170) in the chapel of St George at Limassol, Cyprus. Then the bride was crowned queen by John, Bishop of Evreux. Contrary to the prevailing opinion about their marriage, when Berengaria arrived in Sicily earlier in the year (at the end of March), the feeling in the crusaders' camp was that Richard loved her. If we are to believe a Norman minstrel Ambroise, who next to Roger of Hoveden was the chronicler of the Third Crusade, 'The King did love her and revere/ Since he was Count of Poitiers/ His wish had wished for her alway' (Estoire de la Guerre Sainte in J. Gillingham Richard the Lionheart). Of course it was a very useful diplomatic marriage in the first place, for thanks to it Richard had the southern frontier of his domains secured when he was away. Plus it left his seneschals in Aquitaine with Berengaria's father as an ally, upon whom they could turn to for support should there be a rebellion during their lord's absence.

18 May 1152: Eleanor of Aquitaine (b.1124) and Henry fitz Empress (b.1133), the future parents of  Henry the Young King, were married in the cathedral of St Pierre, Poitiers, with the match that was to result in forging the greatest empire of the 12th century-Europe.

18 May 1175: The Council/Synod of Westminster was convened by the Archbishop of Canterbury with Henry II and Henry the Young King presiding, after the two kings returned to England "in a single boat" first time since the collapse of the Great Revolt of 1173-74.

19 May 1218: Henry the Young King's nephew, the son of Henry's sister Matilda by Henry the Lion of Saxony and Bavaria, Holy Roman Emperor Otto, died aged 43. Otto was not only one of the nephews Henry had the occasion to meet, but, he and his uncle shared the same men as chaplain - after Henry's untimely death in 1183, Gervase of Tilbury, for he was the men, joined the household of Otto, for whom he wrote his famous Otia Imperialia, in which we can find the lines about Henry 'Gracious to all, he was loved by all; amiable to all, he was incapable of making an enemy. He was matchless in warfare, and as he surpassed all others in the grace of his person, so he outstripped them all in valour, cordiality, and the outstanding graciousness of his manner, in his generosity and his true integrity'.

21 May 1172: Council of Avranches (known as the Compromise of Avranches). Henry II was absolved from the murder of Thomas Becket and restored to the bosom of the Church after he released the bishops from their oath of the Constitutions of Clarendon and swore he "would abolish all the unlawful customs established during his reign". Henry the Young King swore after his father.

23 May 1183: during Henry and Geoffrey of Brittany's war against Richard (and their father) together with his knights and mercenaries, the young king seized control of his brother Richard’s castle at Aixe, hollow victory since the Duke and his soldiers had already abandoned the keep. Three days later, on

26 May 1183: during the afore-mentioned war, at Caen, the archbishop of Canterbury and the bishops of Bayeux, Evreux, Lisieux, Sees and Rochester, acting on Henry II’s orders, excommunicated all who “impeded the making of peace between the king and his sons”. All with the exception of the Young King. Henry could not have known that. He was in the town of Uzerche, suffering from- as it may seem- the first bout of illness which was to kill him seventeen days later. He quickly came to himself, though, and joined forces with Hugh of Burgundy and Raymond V of Tolouse, his much-awaited allies.

27 May 1199: Henry the Young King's youngest brother John ascended the throne and was crowned King of England at Westminster Abbey by Hubert Walter.

28 May 1159: one Geoffrey entered the monastery of St Martial at Limoges. He later became the prior and went down in history as Geoffrey of Vigeois, the author of the chronicle in which he described in detail the last days of Henry the Young King

28 May 1175: After they were reconciled Henry and his father prayed together at Canterbury, where 'the egregious martyr Thomas entertained them both equally on their pilgrimage (...) He entertained them in the same way, except that the elder king stayed up on all-night vigils, with prayer, fasting and scourhing lasting into the third day' (Ralph of Diceto in The Plantagenet Chronicles, p.140). Here I would like to recommend an interesting article by T.K. Keefe entitled 'Shrine Time: King Henry II's Visits to Thomas Becket's tomb' (in Haskins society Journal 11 (1998)), where the afore-mentioned piligrimage is described in detail.


31 May 1170: Henry the Young King's brother Richard was invested Duke of Aquitaine by Bertram, Archbishop of Bordeaux and John, Bishop of Poitiers, in the Church of St Hilary at Poitiers.