February could be called the month of Henry the Young King. Two days ago, for instance, we celebrated an important - at least from Henry's own perspective - anniversary. On 2 February 1169 the then fourteen- year-old Henry performed the duties of Senschal of France at his father-in-law's court for the first time. The postion had been previously held by Theobald of Blois*, but earlier in 1169, at the conference at Montmirail**, Louis VII of France (1120-1180) bestowed it upon the young Henry. Here's what Encyclopedia Britannica says about the office itself: 'Seneschal, French Sénéchal, in medieval and early modern France, a steward or principal administrator in a royal or noble household. As time went on, the office declined in importance and was often equivalent to that of a bailiff; the office and title persisted until the French Revolution.' More info here. Even if the position was only representative one, to Henry - at the time a youth twenty-six days shy of his fourteenth birthday - it would mean his first full and personal responsiblity, even if he was only to be in charge of feasting arrangements and attending his father-in-law's table. (Note from whom the first responsibilty came, not from Henry's father, who was to thwart power from him for many years to come, but from  King Louis, his father-in-law. You can read about Henry the Young King-Louis relations here). 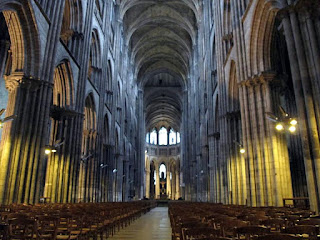 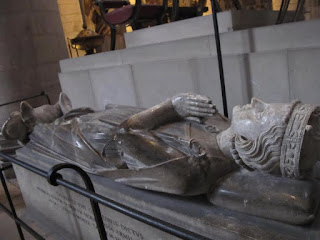 Henry's tomb in Rouen Cathedral. Let us not forget that Henry was the first member of "royalty" buried there (and that the citizens of Rouen had almost gone to war against the citizens of Le Mans to acquire his body). Photo courtesy of Kasia Ścierańska

On 28 we will be celebrating Henry's birthday. I am going to prepare something special, although you will probably agree with me that this year Henry is going to receive his best birthday presents ever. Firstly, on 18 May his biography by Professor Matthew Strickland is out! Secondly, I am happy to report that my dear friend Kasia has been working on her MA thesis about... Yes! Henry is going to have a MA thesis on him in Polish!Wonderful, isn't it? Let's keep our fingers crossed for Kasia. It just so happens that she paid her respects to Henry in Rouen Cathedral last week and now is kindly sharing some lovely photos with us.


* Theobald of Blois (1130-1191), the younger brother of Henri I the Liberal of Champagne, was Henry the Young King's brother- in-law, the husband of Henry's half-sister Alix (1151-1197/98), the younger of Eleanor of Aquitaine's daughters by Louis VII. The funny thing is that Theobald, before marrying Alix, was planning to capture and marry Eleanor herself, after she had been divorced from Louis in 1152.

**  On Epiphany Day 1169 Henry the Young King's father and Louis II of France held a conference at Montmirail, a town of Maine, near to the French frontier. Henry II’s three eldest sons were there, as well as Louis’s beloved Dieu-Donne [the God given]Philip [later Augustus]. According to the treaty the English princes were to hold respectively: the young Henry Normandy, Brittany, Anjou and Maine, Richard Poitou and Guienne, Geoffrey Brittany under his brother Henry. It was also agreed that Richard would marry Alais, Louis's second daughter by his late wife Constance of Castile. Alais was the young Henry's sister-in-law. The next day saw the young Henry and Richard doing homage to Louis, as well as the papal envoys, Simon, Prior of Mont Dieu, Bernard de Corilo, Monk of Granmont and Engelbert, Prior of Val St.Pierre, delivering to king Henry the papal letter of May, 1168, in which the Pope exhorted him to reconcile with Thomas Becket, the exiled Archbishop of Canterbury. The latter appeared before the gathering, throwing himself on the king's mercy at first, but later stubbornly insisting on "certain salvos about the dignity of his Church” and the "Honour of God” (Eyton, p.119). The negotiations broke off. King Henry left the meeting angry and king Louis, so far Becket's staunch supporter, became estranged from him for a few days.