Louis VII of France, the Father-in-Law of Henry the Young King

Yesterday marked the 834th anniversary of Louis VII of France's death on 18 September 1180. I am not going to discuss Louis's career as a king of France. This I leave to my friend, Mr. Richard Willis, who wrote a brilliant post about the monarch. It is Louis the father-in-law of Henry the Young King who interests me today. As a matter of fact, I find it necessary to mention that Louis was the first husband of Henry's mother, Eleanor of Aquitaine. Unfortunately- or quite fortunately, as it turned out- the marriage proved to be as complete a failure as the Second Crusade, in which both Eleanor and Louis took part (he as one of the leaders). In 1152 the couple obtained the annulment, oficially on the grounds of consaguity, which, apparently had been overlooked for fifteen years of their marriage (hmm...). It was common knowledge, however, that Louis wanted to get rid of his wife because she had been unable to give him the much anticipated male heir. The annulment resulted in... founding the Plantagenet dynasty. "But how?", you may ask. Let me explain: precisely six weeks after the divorce was granted, Eleanor, that shameless woman, had a cheek to marry Henry Fitz Empress, Duke of Normandy, Count of Anjou and heir presumptive to the English throne. To make things even worse, scarcely a year passed when she gave birth to a healthy BOY. Two years later another boy was born (the one of interest to us). She was to give her second husband five boys in total. One may only wonder what Louis thought about it, especially that his second wife, Constance of Castile, just like Eleanor before her, gave him only two daughters. The elder of them, Marguerite was bethrothed to our Henry in 1158 and married off to him two years later, on 2 November 1160. Louis did not attend the wedding, for he had no idea it was taking place. Henry II outmanoeuvred him, and having the papal legates at hand, seized the opportunity to gain control of Marguerite's dowry, the Norman Vexin*, which he was to get after the children were wed sometime in distant future- that was at least how Louis must have envisaged it. 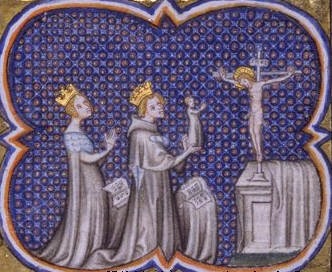 As I said, all the above occured in 1160, but when exactly our Henry met his father-in-law in person for the first time? It seems that their first meeting took place shortly before Henry and Marguerite's wedding, in October, when Henry's father and Louis renewed peaceful negotiations- they were practically at war since Henry's unsuccessful Toulouse campaign of 1159 during which Louis had chosen to come to his brother-in-law Raymond St Giles's aid. The meeting was arranged at the marches of Normandy. On the occasion five-year-old Henry did homage to his father-in-law for the Duchy of Normandy. Louis content- as it seemed- with the outcome of negotiations, went back to Paris where he busied himself with preparations for his hasty wedding to Adela of Blois, who was to be his third wife** Apparently the border meeting dulled his vigilance, for he never saw the blow coming. Only later did he learn that the afore-mentioned five-year-old prince became his son-in-law in the opening days of November. It took Louis and Henry II two years to be reconciled.

But let us not get distracted from the main subject of this post. The meeting on the Norman marches opened the series of similar conferences that were to take place during Henry's entire life. Louis was Henry's father-in-law, but let's not forget that he was, first and foremost, his liege lord. The meeting well worth a mention occured at Montmirail, a town of Maine, near to the French frontier and to Chartres, in January 1169. On the feast of Epiphany Henry II, accompanied by his three eldest sons (John was but three years old at the time), agreed that he and his son Henry were to hold Normandy, doing fealty to Louis and his son Philippe. Additionaly Prince Henry was to hold Brittany, Maine and Anjou and the honorary title of Seneschal of France was to be bestowed upon him by Louis*** Henry and Richard did homage to Louis the following day (7 January). Soon after the meeting, on 2 February, Henry attended his father-in-law's court and performed the office of the Seneschal of France (previously held by Theobald of Blois). It was then perhaps that young Henry and Louis came to know each other better.

When the fifteen-year-old Henry was crowned king in 1170, Louis was enraged that his daughter, Marguerite, was not crowned with her husband. It is hard to believe, however, that he blamed his son-in-law. After all it was Henry II, who pulled the strings. Three years later Henry the Young King rebelled against his father and this time Louis was said to have dipped his oar in already troubled waters by inciting his son-in-law to stand against his sire.**** The Young King did pay a visit to his father-in-law's court four months prior to the outbreak of the revolt (in November 1172), true, but it could not be Louis's scheming itself that galvanized him into action. Let's not forget that the Young King was not a dolt and was uble to think and decide for himself. We can be pretty sure, however, that the French king's conduct as Henry's chief ally and commander in chief during the Great Revolt must have left his son-in-law disillusioned not only about Louis's military and political skills, but also about his piety and sincerity. Louis's blatant violation of the agreements at both the siege of Verneuil in 1173 and the siege of Rouen in 1174, must have been a profoundly disturbing experience for his young son-in-law especially that he was the eyewitness to it.***** When peace was restored and Henry and his brothers met their father to discuss the terms of agreement at Mt Louis, between Tours and Amboise, on 30 September 1174, they did it, as Roger of Howden reports, "by the advice and consent of the king and barons of France". In the light of Louis's shameful conduct- encouraging his son-in-law to oppose his father, violating the terms of truce at Verneuil and later Rouen plus excluding the then sevnteen-year-old Richard "from all benefit of the truce" and leaving him on his own to fight against his father in Poitou- how does his taking on the role of a "peace-maker" look like. Not that our Henry was an innocent, no. But judging from the chronicles of the time, his powerful allies, Louis among them, paid him little heed (in his account of the siege of Rouen Howden does not even mention him as one of the commanders). I wonder what Henry must have been thinking when three years later he witnessed a historic moment: on 21 September 1177, at Ivri, both his father and his father-in-law swore to take the cross.

In 1179 Louis had his only son crowned king. He himself, “labouring under old age and a paralytic malady”, did not attend the coronation which took place at Reims on All Saints' Day. As I wrote in one of my previous posts, Henry the Young King together with his younger brothers, Richard and Geoffrey, represented his father on the occasion, carrying Philippe's crown in the procesion and supporting his head during the ceremony itself. He stood close behind and bent forward to hold the crown upon the boy’s head, and thus relieve him of its weight. ‘This implied’, Ralph of Diceto observes, ‘that if ever the French needed help they could safely ask for it from one who had helped at their king’s coronation’. Kate Norgate interprets this act of kindness as the symbol and harbinger of the later political attitude of Henry’s father towards the boy-king of . Louis must have known about it. Perhaps the Young King paid a visit to his ailing father-in-law and assured him of his and his father's readiness to support young Philippe. It must have been the last time Henry saw and talked to his father-in-law. Louis died a year later, on 18 September 1180. I have not been able to find any record that he and his son-in-law ever met again.


* To learn more about the Norman Vexin, that heated point of contention between  and

** Constance of Castile died a month earlier, in September, after giving birth to yet one more daughter, Alais, the younger sister of Marguerite.

*** Prince Richard was to hold Aquitaine and marry Louis's daughter, the younger Alais (Louis had two daughters of that name, the elder by Eleanor, the younger by Constance of Castile) and Prince Geoffrey Brittany under Prince Henry.

'Louis, king of France, who always held the king of England in hatred, counselled the new king of England, as soon as he should arrive in Normandy, to request the king, his father, to give him either the whole of England or the whole of Normandy, where he himself might reside with his daughter. He further advised him, if his father will be willing to grant him neither of those countries, to return, together with his queen to France to him...' (The Annals, p. 362)

***** Let's not forget that Henry was known for being the epitome of chivalry.