The Ladies of the Tower: Interview with Monika Filipińska and Ludmiła Gajda

Today we are delighted to offer our readers a featured interview and welcome special guests to the blog. On the outside, ordinary young wives, mothers and housekeepers, yet everything changes the very moment they reach the special place they work at, take off their T-shirts and jeans and put on more fitting outfit. Fitting for time travels to the Middle Ages, for this is precisely what their job involves. We are honoured to introduce our interviewees, Monika Filipińska and Ludmiła Gajda, who perform their duties as time travellers' guides exceptionally well. Today we are thrilled to learm more about their fascinating job at one of the most important monuments of the Middle Ages.

What is so special about the place you work at?

Monika: The ducal tower house in Siedlęcin (the Lower Silesia, Poland) is an exceptional building, one of the best- preserved and largest medieval residences of this type in Central Europe, practically unchanged since the 14th century. Additionally and most importantly, it has hidden gems within. On the second floor, to be precise. The walls of its former Great Hall have been covered with the incredible set of paintings. which represent the scenes of the legend of Sir Lancelot of the Lake [Lancelot du Lac]. The recent research revealed that they were created in the fourth decade of the 14th century, perhaps earlier. They are the world's last Lancelot wall paintings preserved in situ and the oldest surviving profane paintings in Poland. 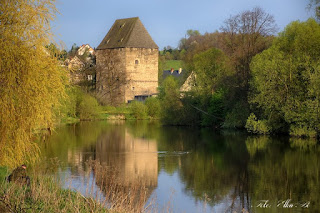 Ludmiła: I would like to add that the tower is by far the most riveting place I have ever known. Filled with legends and mysteries, it provides endless possibilities of exploration. When I was a little girl I loved poking around, discovering things – now I am a woman full grown and nothing has changed. Furthermore, I can infect others with my passion and gladly do so.

Yes, the enthusiasm you have for the tower's history is infectious indeed. The story of how the Arthurian characters made their way to Silesia is a fascinating one. What do we know about the man who founded the tower and comissioned the paintings?

Monika: Henryk I of Jawor [Jauer] was a fascinating figure. Born in the last decade of the 13th century as the third son of Bolko I Surowy [the Strict] and Beatrix of Brandenburg, he assumed formal control of his inheritance, the Duchy of Jawor, in 1312. Shortly afterwards he comissioned the building of the Tower. Henryk was an acute politician which helped him to retain independence from Bohemia when all other Silesian dukes paid homage to King Jan Lucemburský [John the Blind]. He joined anti-Luxembourg coalition and in 1316 married Agnieszka [Agnes] of Bohemia, daughter of the former King Vaclav II of Bohemia and Poland and Queen Ryksa Elżbieta, and granddaughter of King Przemysł II of Poland. Unfortunately their marriage proved childless. By 1335 there were only two Silesian dukes powerful enough to oppose the Luxembourgs. These were Henryk and his nephew, Duke Bolko II the Small of Świdnica [Schweidnitz]. Most importantly, however, Henryk was the first to comission Arthurian paintings in one of his seats. 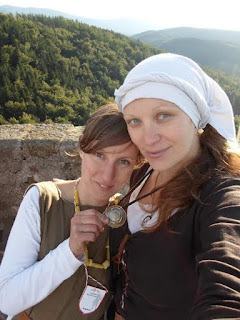 Ludmiła: Preserved monuments and names of the Arthurian characters given to the sons of the Silesian noblility indicate that the Arthurian legends were known at the courts of medieval Poland and Silesia. However, most of the preserved monuments with Arthurian motifs come from the second half of the 14th or from the 15th century. The Siedlęcin murals were created in the first half of the 14th century, which makes their comissioner, Duke Henryk a pioneer in the field.

This is truly remarkable. Do we know anything about the artist himself?

Ludmiła: Since the murals show the influence of the Swiss Waltensburg Master (‘Waltensburger Meister’), art historians find it highly probable that the artist came to Silesia from the north-east of Switzerland, perhaps in the entourage of Agnes von Habsburg, the wife of Duke Henryk's nephew, Duke Bolko II Mały [the Small]. If we assume that the author of the paintings arrived with her, then we have to accept that the murals were created as late as 1338. It seems, however, that the Swiss connections might have been established earlier. Linear-idealistic style flourished in Switzerland already in the first decade of the 14th century - analogical in style, narration and completion were the paintings in the cathedral and one of the patrician houses in Zurich. Let us not forget that the famous Codex Manesse was also created there. 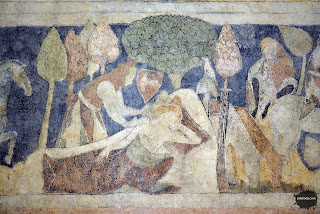 You must be really proud. Not everyone has a chance to work at one of the most important monuments of the Middle Ages. after all, and in the closeness of the world's last surviving Sir Lancelot of the Lake paintings. What do you find most challenging about your job?

Monika: We have every reason to be enormously proud and we really are. There is however a great responsibility resting with us as well. After all we are the ones who represent the tower, not only before the visitors, but also on different official meetings, medieval fairs, etc. On a little bit pesimistic note, many historic monuments of the Lower Silesia face insurmountable problems, mainly financial ones. Sadly, our tower is no exception. But we do our best to withstand the numerous battles with the bureaucratic system and raise the money necessary to keep the things going. It is a serious challenge, but with the help and support of all the lovely people we have met, we are not afraid to face it. I myself could do very little without Ludmiła and our dear gentlemen, Radomir Komsta, Michał Karpiński and Przemek Nocuń. The latter founded The Ducal Tower of Siedlęcin Association, whose members provide invaluable help and support. Together we are invincible :) 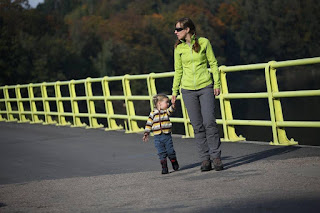 All those who paid a visit to the Tower are unanimous in their praise for your commitment and enthusiasm. What makes them think so? What does your typical work day look like?

Monika: From the ordinary "down-to-earth” duties, such as tidying up, taking care of the tower both inside and outside, running the office and meeting different people, we draw on our energy and creativity resources and do our best to make our visitors feel not only "at home”, but also as if they were taking part in an exciting adventure.

Ludmiła: Of course our main duty is to lead the tours around the Tower trying to give our visitors a sense of place and make them feel that they really „touch” something unique and special. Each day carries new surprises,. We never know what we will be asked about. Some questions are funny, others tricky, but they all give us food for thought. We do like our job and enjoy ourselves immensly, for these are unforgettable, valuable and rewarding experiences we alwyas try to learn from. 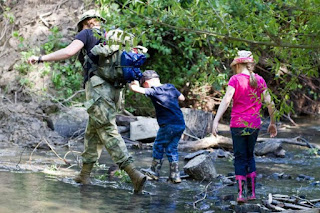 Your offcial website provides a host of information not only about the tower and its long and colourful history, but also about the various events you hold. Could you tell us more about the forthcoming ones?

Monika: This year's high season is going to be a busy one, that's for sure. Fairs, picnics, exhibitions and medieval music concerts in the tower's former Great Hall to name but few. 700 year-old walls provide supberb scenery for such special events in the tower's calendar. Additionaly, our visitors can learn new skills participating in group workshops on weavery, embroidery, medieval cooking and herbal medicine. All forthcoming events are listed on the tower's offcial website. Of course the main attraction are the archaeological excavations. The visitors can take a peep into the work of the young archaeologists of the Jagiellonian University who come back every single year in August to „dig” deeper :)

Speaking of archaeological excavations, an increasing number of people, mainly young volunteers, go on "working” holiday, during which they might for example take part in a dig. This is precisely what you offer this year...

Ludmiła: That's right. The tower is the first Polish monument taken into care of Rempart. the worldwide organization for heritage preservation, which we take for what it is - an enormous success. August openes with the 9th season of the annual archaeological excavations and we are absolutely thrilled to welcome young volunteers from all over the world. Hands-on experience is as important as academic training, so the participants are going to be well content having the opportunity to help our archaeologists at work. More information for the young volunteers interested in gaining this invaluable first-hand experience here and here, on Rempart official website. There are still a few vacancies left. 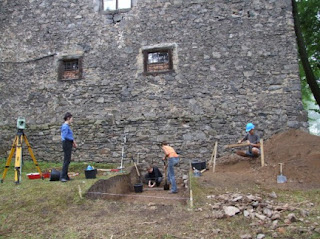 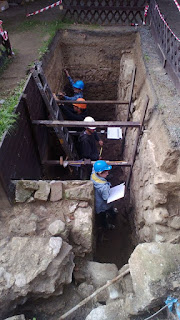 Thank you for this fascinating interview. It was a great honour and pleasure to be given an opportunity to learn more about the tower house in Siedlęcin from the people so closely connected with it. Good luck with all your forthcoming projects.

Whether you choose to visit the ducal tower in Siedlęcin to admire its stunnings paintings, to explore its history or attend one of its various events, check its official website for further information. As for the August camps for volunteers, you are going to find all the information needed here and here.

Photos in order of appearance: