On Sunday, 18 May 1152, Henry the Young King's parents, Eleanor of Aquitaine (1124-1204) and Henry fitz Empress (1133-1189) were married in the cathedral of St Pierre, Poitiers, the match that was to result in forging the greatest empire of the 12th century-Europe. Henry, the eldest son of Geoffrey le Bel of Anjou and Empress Matilda, already the duke of Normandy, heir to England, Anjou and Maine, was lucky to win the greatest prize on the then marital market- the former queen of France now free to be wed again, Duke William X’s eldest daughter and heiress, divorced two months previously, her first marriage declared null and void on grounds of consanguinity. 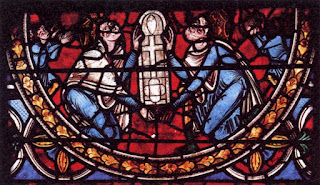 For fifteen years she had been the consort of Louis VII of France (1120-1180), but apparently displeased her husband with bearing him only two daughters, Marie (b.1145) and Alix (b.1151). By marrying Henry fitz Empress just eight weeks after her first marriage was annulled she must have shocked entire Europe - as an English chronicler noted she "with unlawful license soon sent for her new partner" (William of Newburgh) - and angered the other candidates eager to reach for the richest heiress of Christendom. Theobald of Blois, second son of Louis’s vassal, the count of Champagne, and Henry’s own brother, Geoffrey, were both planning to kidnap her. Their plans came to naught, for as Gervase of Canterbury described vividly and in detail: "The duke [Henry] indeed allured by the nobility of that womanand by desire for the great honors belonging to her, impatient in all delay, took with him a few companions, hastened quickly over the long routes [he was in Normandy at the time] and in little time obtained the marriage which he had long desired". Impatient in all delay, true perhaps, but first and foremost, prudent, cautious and foreseeing - he must have known full well that Eleanor or rather her domains were too great a prize not to attract the attentions of other potential "suitors" and that haste was vital if their, his and Eleanor's plans, could come to fruition. He also must have known that the hasty and secret wedding arranged without his overlord's knowledge and consent would mean trouble. As we can read in one of the contemporary chroniclers, his marriage to Louis' ex-wife "was the cause and origin of great hatred and discord between the French king and the duke"(Henry of Huntigdon, Historia Anglorum).

By remarkable coincidence, today is a day when Matthew Strickland's biography of Henry the Young King is out. Just as a kind reminder to all those who haven't ordered it yet, you can purchase the book here.


Here you can see the stunning photos of St Pierre Cathedrale, Poitiers.

* The famous Poitiers window comissioned by Eleanor and Henry who are shown in it as donors. The four figures of children are to represent the royal couple's then-surviving sons, Henry (b.1155), Richard (b.1157), Geoffrey (b.1158) and John (b.1166/67), which places the creation of the window sometime between the birth of the youngest, John, in 1166/67 and the Great Revolt of Henry the Young King, in which he was supported by his mother and two brothers, Richard and Geoffrey, in 1173.


All the quotes come from Eleanor of Aquitaine by Ralph V. Turner