“A fatal day for England, a melancholy havoc for our dear country brought about by its passing under the dominion of new lords”. Since these "new lords" mentioned by William of Malmesbury were Henry the Young King's ancestors it is hard not to mention them on this memorable day when the most famous battle in English history was fought and Henry the Young King's great-great-grandfather emerged victorious from it. We are well aware that had Duke William lost there would have been no Henry the Young King, no Richard Coeur de Lion, no Geoffrey of Brittany and our blog would have never come into existence, still we cannot help it and our hearts go for those behind the shield wall on Senlac Hill and for their King. Hopefully, our Liege will forgive us this one day transgression :) 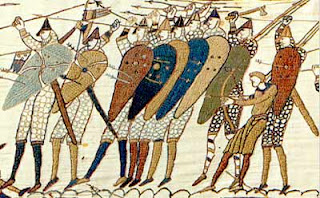 There are a few interesting articles about the battle itself and its main participants we would like to recommend. Firstly, a detailed description of what happened on 14 October 1066 icluding parts about the battlefield's location, the Norman fleet, the weapons - in short all you need to know about the events of that fateful day in 1066 and its aftermath. Secondly, a great article about the castles William had built after the battle. Thirdly, an interesting article about William the Conqueror's childhood by our friend Susan Abernethy. We are certain that our readers will be happy to learn more about this rather neglected aspect of his story and since its also partly a story of Henry the Young king's family and its beginnings...

Young William was the illegitimate child of Duke Robert of Normandy. We know little of his life when he was a very young boy. Duke Robert died when William was seven leaving him to rely on other men to rule his duchy until he came of age. These years were fraught with peril. Perhaps these times made William the warrior he would become, strong enough to lead the conquest of England in 1066.
William was the son of Duke Robert I of Normandy and Robert’s mistress Herleva of Falaise. Robert never married. From the evidence of the chroniclers, Robert probably met Herleva around 1027 and William was born sometime between September 1028 and September 1029. Robert’s liaison with Herleva would benefit her family.... More here.

Discover more about the battle itself and its impact, find out what events English Heritage is putting on across England to commemorate 1066, and explore some of the spectacular castles and great abbeys the Normans built across the land. Check English Heritage website here.


Additionally, we would like to recommend the Anglo-Saxon novels by our friend Paula Lofting. Paula has gone to Hastings to - as she said - fight and, if needed, die for her King (Harold she meant, of course).