Today I am delighted to welcome author  Mark Richard Beaulieu to the blog. He has kindly agreed to share his thoughts and impressions about Henry the Young King biography by Professor Matthew Strickland, with a particular regard to Henry the Young King's marriage.

The Lens of History

The upbringing of Lord Henry, the son who would struggle to succeed King Henri II, proves grounds to contrast the method of writing a historical biography with the method of researching a historical recreation of a life. The many sources Kasia cites in her distinguished blog of the Young King, underly my series about Eleanor of Aquitaine. The latest and greatest source of her advocacy on Henry is Professor Matthew Strickland’s definitive “Henry the Young King 1155-1183,” 472 pages of which 145 pages are notes, bibliography and index. It is excellent reading and written with some vivid verbs. In my writing, I care as much about history as understanding how people come to be, and of course, I allow Henry to have a point of view. Before he could have one, he was married. On the 28th day of February 1155, in the wooded estate at Bermondsey, Eleanor of Aquitaine gave birth to Henry, English-born, his name differentiated from his French-born father, King Henri II Angevin. At the time of the actors, England was a French colony with both named Henri, but the retreating lens of history would eventually call them Henry. The ‘i’ and the ‘y’ are not a matter of distinct orthography; these were two different men. 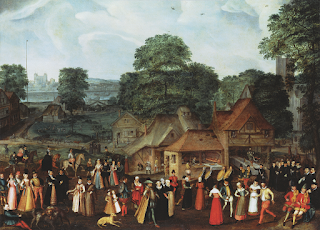 Festival at Bermondsey by Joris Hoefnagel, 1569. Note view of the Tower of London

I would like to dig into Strickland’s biography to examine his lens of history in the three-year span of Prince Henry and Princess Margaret’s marriage and upbringing in his section ‘Betrothal and Marriage,’ pages 25-33. My beef with historical biographers is that in telling a person’s chronology, they write thematically, jumping all over time and space to make a point, rather than stick to how a life unfolds. When framing a person’s life, historians put together statements that could not be known at the time, relate events decades apart, and inject elements that are so anecdotal as to be irrelevant. Strickland is no exception. In his section about betrothal and marriage, his lens of history pops in and out of focus, and we gyre between 1120 and 1183 often making points that should be relegated to the footnote. Maddeningly he tells the chronology out of order making one reorder paragraphs to understand the drama taking place on the human level. This can be put another way.

When you look at the life of a person from a historical view, you often come to the sedate conclusions of others. However, when you live that life, you see an altogether different person confronting risks, moral challenges in the drama of life that is judged from the actor’s point of view. Framing the past with a hindsight view ruins a fresh interpretation of history. (See Ulrik Kristiansen’s post) Of the many sequences of events in a life, which do you pick to tell your story? To save the time of the audience, the historian, and the story-teller select a limited set of focal points to stage what must be told. From one stage, a writer can abridge, rolling-up prior events, relaying the drama of the present, and conjecturing possible futures.

Understanding the Betrothal and Marriage
The chronological stages of the marriage of the five-year-old Henry with the three-year-old Margaret are:

“The marriage of Young Henry and Margaret offered the possibility that the Angevins might absorb the House of Capet,” writes Strickland in this section of his brilliant book. He writes that contemporaries viewed the proposed marriage as a move to peace. However, in 1158 Thomas Becket had already organized the London guilds to deliver a great trade-mission parade to Paris, paving the way for King Henri to spend September through November to wine and dine King Louis all over Normandy. The betrothal is arranged, with no ceremony for three years and the Vexin as dowry territory. King Henri concludes the year taking Margaret over the border in trust of a Norman ward.

So peace was in the works in 1159. However, in a surprising move that makes history interesting, Henri dramatically goes to war with Louis over the Duchy of Toulouse. Henri’s armies conquer nothing, and he declares a truce. With one exception. Sir Thomas Becket takes the Duchy of Quercy, apparently much of it occupied after the truce, expanding Aquitaine borders. This sore point of prowess roots the first enmity between Henri and Becket.

1160 was one amazing year for five-year-old Henry who ends up married to a two-year-old girl. This year also begins the general theme of a father, for his own gain, treating his son as a pawn. From a historian’s point of view, Strickland writes richly with a lens of history that shifts in and out of time, though accounting for dead kings and bishops, and conjectural threats that border on distracting. As fortune would have it, the English Pope Hadrian died the prior year, and during the transitional battle for the Papacy in July 1160, Henri obtains from clergy meeting in Normandy a nuptial dispensation to have an early wedding. This is without notice to Louis. They were still in conflict over Toulouse. What is new is Queen Constancia is round with child, and Henri is motivated to settle peace terms and assure the future of his son’s marriage to secure the dowry. My side note: a few historians say Eleanor was also round with child, a still-birth terminated in summer. The child was auspiciously named Phillip. Her miscarriage foreshadows history and drama. Historians are not prone to emotional writing, and it is gratifying to see Strickland become a little unhinged at the audacious scheming of Henri and the amazing events in the later half of 1160. I will tell it in the right order.

In late September, Alais Capet is born, but Queen Constancia dies in childbirth. Rather than mourn the traditional two years, Louis immediately searches the nearby duchies for a new wife. In October, Henri meets with Louis, crying crocodile tears, perhaps frightened by Eleanor’s tragic miscarriage months before. The Kings exchange sympathies and settle last year’s war over Toulouse. Louis recognizes Henri’s gain of Quercy and affirms the Vexin dowry. Henri specifies the key castles be held by neutral Templars. During these discussions, Henri learns the urgency of Louis’s wedding set for November, only six weeks after the death. Henri has a wedding in mind of his own. In fear of losing the transfer of the dowry because of Louis’s new marriage, and during the confusion of Louis’s bridal search, and in some sense replicating his own secret marriage to Eleanor, on November 2nd Henri uses the nuptial papers to force the marriage of Henry and Margaret. On the same day – in Hollywood Godfather style – Henri shows the papers of the deed done, discharging the Templars to assume the Vexin dowry castles which he fortifies. Though outraged at the treachery, King Louis marries Adela on November 13th. In an ensuing war, he is outmaneuvered by Henri. It is a wonder, but in time, Louis will yield Margaret’s sister Alais to a later betrothal. Strickland notes: through Margaret, Young Henry will fall under the influence of Louis, a more generous and lovable father than his own.

Strickland’s historiography omits a key piece of statecraft concerning Henry’s marriage. Castile is the homeland of Constancia. Louis makes an ally through his pilgrimage to obtain his bride at age thirteen from King Alfonso 7. Castile becomes a target for Henri and Eleanor, who successfully shut out Louis ten years later, by betrothing Eleonora in 1170 to King Alfonso VIII.

 
Mark Richard Beaulieu is writing a six-book series called the Eleanor Code. He is an expert on the 12th-century world of Eleanor of Aquitaine. Mark is known as an accomplished author, collected painter, award-winning photographer, and innovative software technologist. Mark is on a first name basis with Eleanor and her staff, cooking for her from time to time. Mr. Beaulieu trained as a studio artist and holds a Master of Fine Arts from the University of California at Davis, and a Bachelor of Fine Arts from Trinity University in San Antonio, Texas. He grew up in Heidelberg, New York City, Texas, California, and lives in Escondido with his wife and pets, watching their children come into the new word.

Love and Rebellion is his fifth book in the six-part Eleanor Code series.

"Challenge can be a book required to be read. Forced to take Medieval Studies at the University of Texas at Austin in 1971, I picked up a thin red volume translating Andreas Capellanus 'Art of Courtly Love.' The subject has concerned me ever since."
-mrb Escondido, California, Spring 2012

 The six books of the Eleanor Code series, with her primary identities and dress colors on the spine: yellow, gold, blue, green, scarlet, purple.

A select bibliography of works and other Eleanoria can be found at:
www.eleanorofaquitaine.net