Exactly 893 years ago, on a bitterly cold and frosty” night [Orderic Vitalis], the White Ship went down in the waters near Barfleur, taking almost all her passengers to the bottom of the sea. Among them was William Ætheling (b.1103), Henry I's son and heir.

… the head which should have worn a crown of gold, was suddenly dashed against the rocks; instead of wearing embroidered robes, he floated naked in the waves; and instead of ascending a lofty throne, he found his grave in the bellies of fishes at the bottom of the sea… [from Henry of Huntingdon,Letter to Walter]. 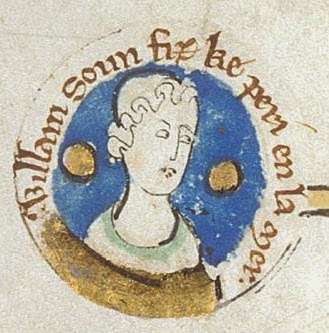 Together with the prince perished his half-brother, Richard, king Henry’s bastard son, “one whom we admired for his talents, and from whom we expected great things” Their half-sister, Matilda, wife of Rotrou Count of Mortain [William of Malmesbury calls her the countess of Perche], and Richard, the young earl of Chester [aged twenty-six], the only son of earl Hugh, with his wife Matilda [the king's niece], and half-brother Othere [Ottuel], the Prince’s governor and tutor. The cream of the young Anglo-Norman aristocracy was drowned that day, and “very many of the king’s household… and with them a countless multitude of very incomparable folk besides” (The Anglo-Saxon Chronicle).

With his son’s head dashed against the rocks, Henry I’s dynastic schemes were dashed too. From now on there would be but one thought troubling the king: who would succeed to the throne? William was his sole legitimate male heir, the one who was to rule both England and Normandy. His untimely death in the White Ship disaster and his father’s subsequent failure to produce a legitimate male heir from his second marriage led to the succession crisis and the nineteen years of the darkest period in the history of medieval England, the Anarchy.

Last year I wrote about the White Ship and Henry the Young King here (by far my most popular post, I wonder whether its enigmatic title had something to do with it :-) )


On a brighter note, had William survived there would have been no Henry the Young King, and no blog about him.