Today marks the first anniversary of Henry the Young King blog! Hooray! I started it exactly a year ago, on 7 November 2012, posting about Henry at the coronation of his brother-in-law, Philip Capet [later Augustus] And here we are still, jauntily conquering blogosphere. To celebrate the joyous occasion I have invited my favourite historian and blogger to answer a few questions about her brilliant blog and offer Henry and me a friendly word of advice for the future. I am deeply honoured to welcome Kathryn Warner. Kathryn grew up in the Lake District in the north-west of England, and gained a BA and an MA with Distinction in medieval history and literature from the University of Manchester.  She spends much of her time researching and writing about King Edward II (1307-1327), and has run a blog about him since December 2005. Kathryn had an article published in the English Historical Review in 2011 and enjoys poring over and translating primary sources of Edward II's reign.  When not immersed in the early fourteenth century, she works as an English teacher and loves cross-stitch. 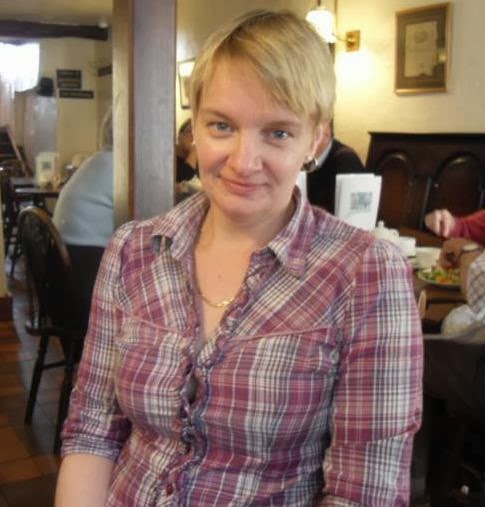 Hi Kathryn! Thank you for accepting my invitation. I am overjoyed to welcome you and your liege to our humble abode. Could you tell us why Edward II?

I have a strange feeling in fact that Edward II chose me, not vice versa. :)  I studied medieval history at university and wrote an essay about Edward in the second year of my BA, but back then I always had the feeling that he was the medieval king of England I knew least about.  Some years later, I was reading a novel in which Edward's great-uncle Richard of Cornwall was mentioned several times, and this led me to do some background reading and research about Richard and his family.  Within weeks I'd moved on to Edward II, and somehow I had the strong feeling that I'd found the thing I was meant to be doing in life.  He fascinated me and he's fascinated me ever since. There's little doubt that he was a disastrous ruler and war leader, but his unconventional and eccentric personality appeals to me enormously and I never, ever get sick of reading about him and researching his life and reign.

Why and when did you decide to run the Edward blog?

It began in early December 2005. I had so much information about Edward in my head and thought that starting a blog would be a good way of writing things down and getting them clear in my own mind, and with any luck I might find like-minded people I could discuss Edward and medieval history in general with (this being a few years before I joined Facebook and found a lovely community of history lovers there). I had no idea how many people, if indeed anyone, would be interested in reading about a fairly obscure and hopeless king of 700 years ago, but in fact I've had well over half a million readers since then. I've written at least three posts, sometimes as many as eight, every month since, just under 500 in total so far.  And I'm hoping to write at least 500 or 1000 more.  :-)

Was it very difficult to gather the audience?

Actually, no. Within a reasonably short time I'd been linked to on other history blogs and sites, and this brought me quite a lot of readers.  There's a heck of a lot of really bad, inaccurate info about Edward II online and mine is the only site about him which is properly sourced and researched, and fortunately a lot of readers are discerning enough to be able to tell the difference. My site ranks very highly on Google searches for Edward II himself and for a lot of people and events of his era, at least in the top five or six results, and often (if there's no Wikipedia page for a person) my blog is the first result on Google's main page.

When did your impressive work start to bear fruit? Did you have to wait long?

I've been thanked in the acknowledgements of around a dozen books now,fiction and non-fiction, including Ian Mortimer's 2008 TimeTraveller's Guide to Medieval England and his 2010 Medieval Intrigue: Decoding Royal Conspiracies.  My site is mentioned in Professor Seymour Phillips' scholarly 2010 biography of Edward II, and the professor was kind enough to offer me a free copy of his work.  My article 'The Adherents of Edmund of Woodstock, earl of Kent, in March 1330' was accepted for publication by the English Historical Review in October 2010 and appeared the following August.  In June 2013, I was interviewed by a BBC crew for a documentary about the battle of Bannockburn (which Edward lost) to be shown for the 700th anniversary of the battle in June 2014.  I've also advised a few novelists, discussed Edward and his contemporaries with genealogists, and over the years have built up a reputation as the 'go-to' person for all things Edward II online. 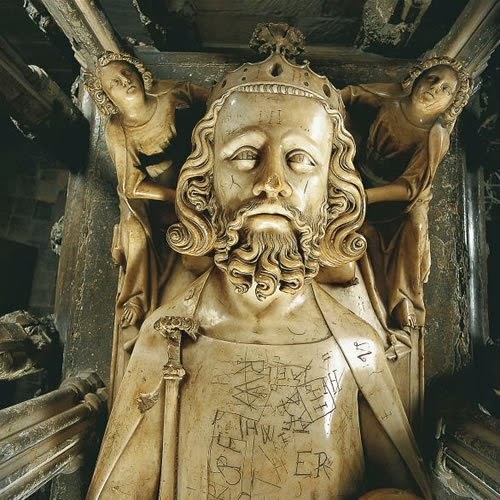 How did/do the readers respond to so many new and mostly obscure facts about Edward? Were/are they eager to change their opinion on the king?

Before I started my blog there was nothing at all online about Edward's character and personality except for the wildly inaccurate nonsense we see in some novels and Braveheart (camp and feeble and a really awful husband, basically), repeated all over the place as 'fact'.  There are some sceptics, of course, but overall my detailed picture of what Edward was really like has proved extremely popular, and a lot of people have been kind enough to tell me how grateful they are for rounding out his character so much and for proving accurate information.  And yes, I'd like to think I've changed quite a lot of opinions ;-)

The research :-)  When I get inspiration for a blog post, I love to do as much research as I can for it, poring over the chancery rolls and chronicles and letters and so on. Little makes me happier than having a reason to examine the primary sources of the early fourteenth century.  :-)

If you could go back in time and were summoned to Edward's court, what pieces of advice would you choose to provide him with (so that he could change his reign a little bit)?

Haha, there are so very, very many things he did wrong, it's hard to pick. ;-).  Having to choose just one, I'd advise him to travel to France to pay homage to his brother-in-law Charles IV for the lands he possessed in France (Gascony and Ponthieu) in March or April 1324, when he was first invited. Because Edward, understandably, loathed the prospect of having to kneel to another man, he found excuses and put it off as long as possible, then found himself at war with France and with endless unrest at home (entirely of his own making, ofcourse).  The situation deteriorated ever more until Edward was forced to send his son in his place in September 1325, too afraid to leave England himself, and losing control of his son and heir proved to behis undoing.  Had he gone to France eighteen months previously, he would never have had to separate himself from his son, which was fundamental to the invasion of his queen and Roger Mortimer in September 1326.

Where do the new ideas come from? It must be difficult to find a good topic after 8 years of running a blog.

Sometimes, I have to admit, it get difficult after so many years and posts to think of new topics! Often reading something online or in a book inspires me, or I see something in a primary source about a person or event I haven't yet written about.   There are some issues I deal with more than once because I keep seeing nonsense perpetuated about Edward online and in print, such as the ludicrous and totally untrue notion that he wasn't the real father of his queen's children.

Lastly, a recipe for a good blog...

Updating your blog as regularly as you can is key to building a good audience. I write on many topics, as and when the mood takes me, but have all the posts linked in thematic groups in the sidebar to make navigation easier.   Writing a humorous post once in a while always goes down well, I find, as do book reviews.

Thank you, Kathryn, for all the answers and kind words of advice, and for your precious time spent in our company. I could not imagine a better way to celebrate our first anniversary. Hopefully my liege and I, just like you and Edward II, will meet more and more like-minded people to share our passion and enthusiasm with.