Belated Happy Wedding Anniversary to Henry the Young King's youngest sister Joanna (b.1165) and William II Sicily (b. 1155) who were married with the pomp and ceremony of a royal wedding on 13 February 1177 in Palermo, probably in the beautiful Palatine Chapel comissioned by William's grandfather in Palazzo Reale.

"The city of Palermo was resplendent with the marriage celebrations of the king of Sicily and the king of England's daughter. Archbishops and bishops, counts and barons, clergy and people flocked at once to solemnize the marriage and the crowning of the new queen, and Walter archbishop of Palermo performing the marriage ceremony..." (Ralph of Diceto in Images of History) 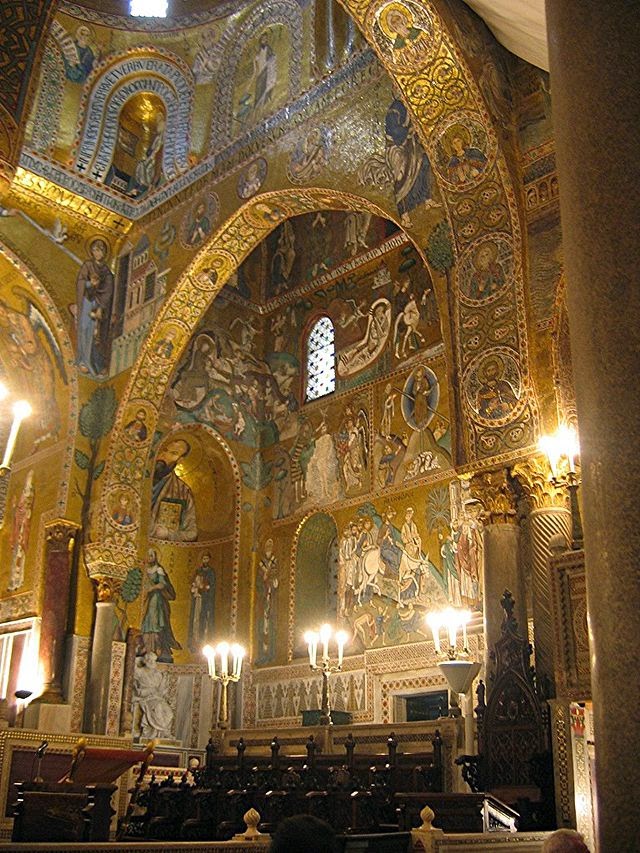 Joanna was born in October 1165 as the youngest daughter of Eleanor of Aquitaine (1124-1204) and Henry II of England (1133-1189). At the time of her birth Eleanor was in her forties, already a mother of seven children (not to count the eldest son William, who died aged three in 1156), two by her first husband Louis VII of France (1120-1180) and five by Henry. Eleanor was to give birth to one more child, a son whom she was to name John (1166-1216). When Joanna turned three there were already plans to marry her off to William of Sicily. The latter came to the throne in 1166 upon his father's death with his mother Marguerite of Navarre (c.1128-1183) acting as regent. Sharing a common Norman ancestry and culture, the Sicilian court maintained close ties with Henry II's realm and the stage for Joanna and William's bethrothal was set as early as 1169. Not only queen regent Marguerite was in favour of the marriage, but also her influential adviser and William's confidant Vice-Chancellor Matteo d'Ajello (d.1193). However, the murder of Thomas Becket in December 1170 brought the marriage negotiations to a halt. It took Joanna's father and the pope some time to reconcile. In the meantime, the Byzantine Emperor Manuel Comnenus offered William his daughter as a future wife. Agreement was reached, but much to William's embarrassment the emperor did not keep his side of the bargain and the girl never arrived.

In 1176 William renewed negotiations with Henry II. His envoys - three prominent churchmen and the Justiciar of Sicily accompanied by the Archbishop of Rouen, who was the uncle of queen Marguerite of Navarre  - arrived in London, where on 20 May Henry "with the consent of all the bishops, earls and barons of the kingdom" agreed to give Joanna in marriage for the king of Sicily. About 31 May, so before his delegation including John, Bishop of Norwich; Paris, archdeacon of Rochester; Baldwin Bulot and Richard de Camville, left England for Sicily, the king visited Winchester where Joanna was residing at the time, perhaps to inform her in person about the agreement that had been reached. Telling proof of his fatherly love and concern. On 15 August Henry held a council there to discuss Joanna's marriage in detail.

Joanna left England for Normandy about 8 September, her escort consisting of her uncle Hamelin de Warenne [Henry II's natural brother], Richard, Archbishop of Canterbury; Rotrou, Archbishop of Rouen; Geoffrey, Bishop of Ely; Gilles, Bishop of Evreux; Henry, Bishop of Bayeux; Hugh de Bauchamp, Osbert de Camera, and Geoffrey de la Charre [Eyton, p.206]. On her journey to St Gilles she was accompanied by her brother Henry who led her through domains which were nominally his as far as Poitiers, where he entrusted her to Richard's care. Neither Henry nor Joanna could have known that they were never to see each other again.

At St Gilles she was welcomed by William's delegation. There were 25 galleys awaiting her. Her dowry consisted not only of fine horses and ships, but also of a golden table, 24 golden dining vessels and a silk tent of considerable size, which we know thanks to a description of the gifts her father presented her with upon her daparture and thanks to her brother Richard's list of the items that were to be restored to her by Tancred of Lecce, when the latter seized the throne after William's death. Joanna and her entourage spent Christmas of 1176 at Naples, probably due to her susceptibility to seasickness. 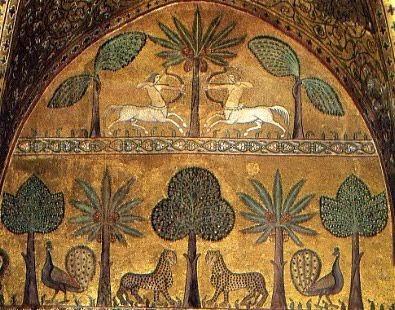 When on 2 February 1177, Joanna, accompanied by Gilles, bishop of Evreux and other envoys of her father, entered Palermo by night, William and "the whole city" were waiting at the city gates to welcome her, and "lamps so many and so large, were lighted up, that the city almost seemed to be on fire, and the rays of the stars could in no way bear comparison with the brilliancy of such a light". Joanna "resplendent with regal garments" was mounted on one of the king's horses and escorted to a palace where she was to await her wedding and coronation (Howden p. 413). The girl must have been bedazzled as all members of her retinue, who gave a detailed account of their stay in Sicily upon their return to the Angevin domains. Back in England and in their continental domains her father, her captive mother, her elder brothers must have felt both pride and relief when listening to the story of her warm reception.

When Joanna and William married, she was seven months shy of her twelfth birthday and he was twenty-two, so the same age as her eldest brother Henry. Following the tradition, they were crowned king and queen shortly after they were pronounced man and wife, at the same ceremony, being William's second coronation. On their marriage William issued and executed a charter in Joanna'a favour:

"...we, William, by the favour of the Divine grace, king of Sicily, and of the dukedom of Apulia, and of the principality of Capua, do unite unto ourselves by the laws of matrimony and the bond of wedlock, with the Divine sanction and under happy auspices, the maiden Joanna, of royal blood, and the most illustrious daughter of Henry, the mighty king of the English; to the end, that her fidelity and her chaste affection may produce the blessings of the married state, and that by her a royal offspring may, by the gift of God, hereafter succeed us in the kingdom, which, both by reason of its endowment with all virtues, and of its title by birth, by the divine grace, both may and ought to be raised to the throne of this realm. But, inasmuch as it is befitting our exalted position that so noble and illustrious an alliance should be honored with a becoming dowry, by this present writing we do give, and as a dowry, do grant to the before-named queen, our most dearly beloved wife the county of Mont Saint Angelo,  the city of Siponto and the city of Vesta, with all the rightful tenements and appurtenances thereof." (Hoveden, pp. 414-415)

Joanna received the afore-mentioned lands in demanio, which meant she could keep them as long as she lived, no matter whether she was to reign or not. Those lands were to be of crucial importance in the future, as time was to show.

God bless Roger of Hoveden for his chronicle, which is not only a treasure chest full of precious little nuggets of information,  but also archive of official documents. Roger was not a member of Joanna's entourage in 1177, but he accompanied Joanna's brother Richard I on his way to the Holy Land in 1190, keeping what can be called the official diary of the Third Crusade. Thanks to him we have a rare opportunity to read a detailed account of what befell Joanna after her husband's death. But let me post about it on 11 November, being the day William passed away in 1189.

Images of History by Ralph of Diceto in The Plantagenet Chronicles ed. by Dr Elizabeth Hallam.  Editions, 2002.


"To have and have not: the Dower of Joanna Plantagenet, Queen of Sicily (1177-1189)" by Colette Bowie in Queenship in the Mediterranean, Negotiating the role of the queen in the Medieval and early modern eras by Elena Woodacre, Google Books

Richard the Lionheart by John Gillingham,Wiedenfeld and Nicolson, 1989.