With All For All: The Life of Simon de Montfort Blog Tour

Wonderful news for all Simon de Montfort admirers: to celebrate the publication of his new book With All For All: The Life of Simon de Montfort, author Darren Baker will be taking part in a week-long blog tour and we will have a rare honour to welcome him to our humble abode as well. Follow his progress as he discusses all things Simon de Montfort, starting on Monday 23rd February and meet him at the following blogs:

Monday 23rd February: Launch at Medieval News featuring a video spot with Darren explaining how he came to write a book on the life of Simon de Montfort.
http://medievalnews.blogspot.co.uk 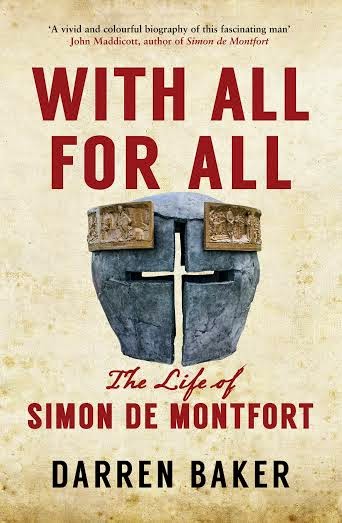 Tuesday 24th February: Darren will be interviewed by Kasia Ogrodnik Fujcik, the keeper of Lesser Land – find out everything you want to know about Henry III the Young King.
http://henrytheyoungking.blogspot.cz

Wednesday 25th February: Darren will be posting a guest article about how the Montfortian struggle was viewed by the chronicler ‘The Templar of Tyre’. Hosted by John Paul Davis, author of The Gothic King: A Biography of Henry III.
http://theunknowntemplar.com

Thursday 26th February: Visit The History Vault where Darren will post a guest article explaining how Montfort’s contribution to the development of Parliament was more than just summoning the burgesses in 1265.
http://www.thehistoryvault.co.uk

Friday 27th February: A guest article from Darren comparing Simon de Montfort and Thomas of Lancaster, together with a competition to win a copy of the book! Hosted by Kathryn Warner, author of Edward II: The Unconventional King.
http://edwardthesecond.blogspot.com

Saturday 28th February: A guest post on Sara Cockerill’s website, the author of Eleanor of Castile: The Shadow Queen. Darren will post a guest article on whether there might have ever been a King Simon.
http://www.saracockerill.com

Sunday 1st March: Montfortian scholar Kathleen Neal at Thirteenth Century England will finish off the tour with a few questions for Darren.
https://thirteenthcenturyengland.wordpress.com 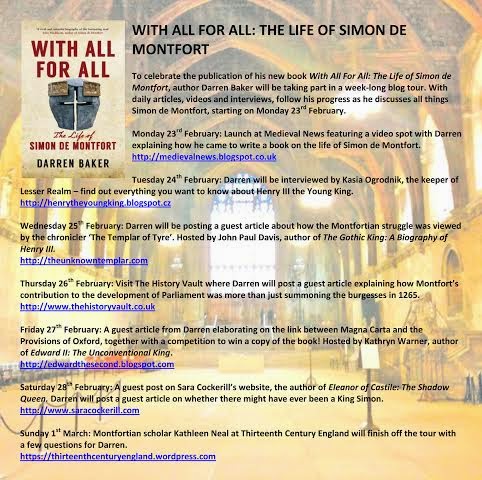