Because of the Impeding Sins of the Son: Henry the Young King Through the Eyes of a Foreigner

From his wife, he [Henry II of England] had four sons and two daughters*, namely King Henry, a most virtuous, generous and handsome youth, who retained for himself any number of virtuous knights from everywhere as household knights. While still living, his father caused him to be crowned as king, which afterwards was turned to his own disadvantage.

Interesting to look at Henry the Young King and his short career as a co-ruler of England through the eyes of a foreigner, isn't it? The foreigner I am going to "employ" is Gilbert of Mons (b. 1140-1150), a cleric, who served at the court of Count Baldwin V of Hainaut, first as a chaplain (1175), then second and first notary (118-1184), only to come into office of chancellor of both Hainaut (1178/80-1195) and Namur (1192-1195). His greatest accomplishment, however, was the chronicle he was the sole author of and which went down in history as Chronicon Hanoniense, the Chronicle of Hainaut. He wrote it shortly after the death of his patron, Count Baldwin V in 1195, which also marked the end of his court career, probably because Baldwin's son and successor, Baldwin VI, preferred his own ministers. Judging from the events and historical figures Gilbert mentioned, he must have completed it between 1195 and 1196, for there are no references to the events after 1196. The death of Emperor Henry VI in 1197, for instance, is not mentioned, nor is John ever styled King of England. Still the chronicle is invaluable source of information not only about the houses of Hainaut and Flanders, but also about the counts of Champagne, Vermandois, dukes of Louvain, etc., not to mention the royal families of France and England. Just to give you a foretaste of what you may expect if you decide to take a closer look at Gilbert's work:

Therefore, having reasonable advice, he [Baldwin V] even proposed to ask the count of Flanders, as he had always served him in all matters with many men and great expenses. Taking with him outstanding and virtuous men, Eustace the Elder of Roeulx and his son Eustace, Nicholas of Barbencon, Otto of Trayegnies, Wlater of Wargnies, Amand of Prouvz, Regnier of Trith, Hugh of Croix, Baldwin castellan of Mons, Goswin of Thulin, John Cornutus, Baldwin of Walincourt, William of Haussy and many others, he came to the count at Arras. He found him there with many Flemish and Vermandois knights on the Sunday before the feast of St Peter on the third day. The Count of Flanders presented an extremely troubled face, with everyone sitting silently because their count was disturbed. The count of Hainaut called upon the count of Flanders as his ally and sworn man [the two were brothers-in-law] to help him against the duker of Louvain because of his honour and to retain his inheritance. the count of Flanders looked for excuses... (p. 91-92) 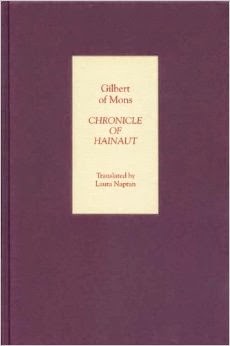 Gilbert's accounts are always like the one presented above, especially when he describes "domestic" affairs, meaning Hainaut and Flanders. Having been an eyewitness to the events he mentions, he always provides details in great abundance, just like in the snippet above. The names of Baldwin's knights, Philip of Flanders's troubled face, his men sitting in silence, etc., all these stand as testimony to Gilbert's reliability. When it comes to foreign affairs, however, he sometimes gets the dates mixed. Let us not forget that the Hainaut's connections to the ruling house of England, its court and politics, went mainly through Philip, the count of Flanders, whose mother Sybille was the sister of Geoffrey le Bel of Anjou and thus aunt of Henry II of England. As for Eleanor of Aquitaine, there was a connection as well, Philip's younger sister Marguerite was the wife of Eleanor's nephew, the young Count Raoul II the Leper of Vermandois (d. 1167), before she married Baldwin V.

But to the point, in his Chronicle Gilbert mentiones the Young King a few times. The lines I have opened this post with are the first in which Henry's name appears. Curiously enough, when reading about Henry and his younger brother Richard [the future Richard I Lionheart] as they stand together in the introduction of Henry II and Eleanor's family, we are offered a rare glimpse of the differences in their personalities. Thus we get 'King Henry, a most virtuous, generous and handsome youth, who retained for himself any number of virtuous knights from everywhere as household knights ...' vs. 'Richard, a most fierce knight, to whom his father (while still living) gave the duchy of Aquitaine for his possession. Accordingly Richard was called the count of Poitiers'.

We know that Gilbert wrote twelve years after Henry's untimely death, so with the benefit of hindsight, still it is interesting to take a glimpse of how Henry II - Henry the Young King relations were percieved by those representing the outer world. The first passages about Henry are fair enough, Gilbert succeeds in staying impartial. He neither condemns the son nor favours the father, stating simply that the coronation of the prince was Henry II's mistake. He does not dwell on the young king's transgressions as the other chroniclers tend to do. Next time he mentions Henry, however, and it is on the occassion of Baldiwn V's homage to the young king's father paid in 1172, he spins the well known and often retold moral tale, which - if we take pains to investigate the real state of affairs - turns out to be far from true.

In those days, this same King Henry of England (...) embraced his sons with great esteem and raised them to their own properties with all honour and placed them in charge by themselves. For he put aside the royal crown and caused his son Henry to be crowned, a most virtuous knight, most generous in faultless gifts, who attrected to his company whatever virtuous kinghts he could form any lands, and had as wife the daughter of King Louis of France. Of the entire land, King Henry II retained for himself the fruits and profits belonging to that kingdom, and kept for himself the administration of his son the new king. Afterwards his son was not averse to rising up against his father, with the help of King Louis of France, wishing to drive his father from the kingdom. He had no success against his father, by his own efforts or those of his helpers, not because of the pressing merits of the father, but because of the impeding sins of the son... (pp.63-64)

We know that Henry II neither "put aside" the crown nor raised all his sons to their own properties - Roger of Hoveden makes it clear how many times the Young King asked his father for a piece of land or a castle where he could settle and live with his wife, each time to no avail. When describing the circumstances of Henry's death., Gilbert makes amends - not intentionally but he does - stating openly that Henry waged war on Richard because "he possessed nothing by inheritance from his father or mother, and his brother Richard possessed the entire land of their mother...", thus Henry wanted Aquitaine for himself.

As for the Great Revolt of 1173-74, Henry's role is summarised in one sentence- 'In the year of 1173 following the Lord's incarnation, Henry the aforesaid young king of England made war and serious hostility against his father with the help of King Louis of France' (p.65). Gilbert's prime focus is on Philip of Flanders and the role he played, but when it comes to Baldwin V of Hainaut and why he did not hasten to Henry II's aid "from whom he had ten marks annually in fief", he offers something that can be taken as an excuse, noting that because the count "was not in any way obligated in homage or affection to the king of France", he wanted to cross in secret through the lands of Philip of Flanders, his brother-in-law, to join Henry's forces. According to Gilbert, Baldwin actually set off at the head of his troops, leaving the reins of government to his Countess, but was surprised and "challenged by an ambush" by some Flemings, one Hellin of Wavrin and others.

As for the war of 1181, between Philippe Auguste of France and Philip of Flanders, we are offered detailed account, mainly and not surprisingly from the Hainaut/Flanders perspective. We learn that 'by the Devil's incitement, huge disagreement arose between Count Philip of Flanders and Vermandois, and his lord King Philip of France' and that, as Gilbert put it, "each was confident in his fierceness and very great power, and hurried to engage in war". Henry II of England sent his three oldest sons at the head of their troops to support the young king of France. This military campaign is described in detail not only by Gilbert but also by Ralph of Diceto in his Images of History. Here's my post about Ralph's version of events, in which he mentions Henry the Young King a few times. In Gilbert' s Chronicle Henry's role and involovement in the struggle is reduced to one sentence - 'The lord king Philip of France, who had Henry the young king of England with 600 knights with him, rushed to battle against the count of Flanders' (p.78). I wish that in Gilbert's words we could find a confirmation of Ralph's version, namely that "The count [Philip of Flanders] feared to meet King Henry, son of the king of England, face to face and shut himself up in the castle of Crepy". Even if Gilbert says nothing about it, I still find it highly probable. From Philip's perspective it must have been extremely difficult to meet Henry face to face and not only because they were kin, but also because they were friends and companions from the tournaments circuits. I would risk a statement that there were no other two men in their world, who would understand each as they did.

Lastly, a few words about Henry's death, an interesting bit about Richard included - not every chronicler states openly that the future Lionheart was not a favourite in his lifetime (certainly not in 1183) - to the contrary, the disgruntled barons of Aquitaine had much to say about it, and, judging by the snippet I am to give, not only them. It seems that Richard earned a bad reputation also "abroad".

Although the young king had taken many castles and good towns from his brother, and had attracted many powerful men to his side (because Richard was loved by few), yet that young king was surprised by an illness, and deprted from the world in the borough which is called Martel. (p. 84)


To sum up, Gilbert of Mons certainly offers many interesting bits of information about his contemporaries, the royal House of Anjou included. I daresay that his foreignness is to our - I mean Henry the Young King and his family fans - great advantage. I hope I have succeeded in making this post and its content as fascinating to Henry the Young King readers as I myself have found it.