Short Notes On Work In Progress...

As you may know I am currently working on a post about Henry and his younger brother Richard who was to go down in history as Couer de Lion. When researching and re-reading, I have come across this - as I would call it - key quote concerning Henry II and the way he treated his eldest son and heir. I am sharing it with you now, but will make proper use of it and discuss it at length when writing about Henry, his younger brother John and who was the real Lackland in the family. 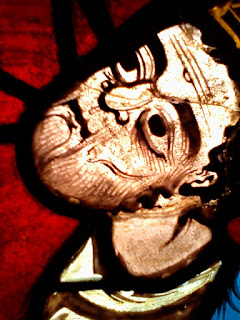 In his biography of Richard, John Gillingham gives a vivid description of Henry senior, quoting and analyzing works of Henry's courtiers, Walter Map among them. It was Walter who was to report that when ruling and dealing with his subjects his liege lord usually employed methods adopted from his mother, Empress Matilda. According to Walter "he seems to have dealt with those who came to him with requests by saying that he would do something for them, and then repeating this promise whenever he had to, postponing action for as long as possible." (Gillingham, p. 31)

"He should keep aspirants waiting in hope," the Empress was to instruct him, "deliberately spinning out their affairs, for an unruly hawk, if meat is held out to it  and then snatched away and hid, will become keener and more inclined to be attentive and obedient." (Gillingham, p. 31). If only the Empress - if she ever had said so - could have forseen that her firstborn would employ this very method when dealing with his own sons, who, in turn would prove to be as much as the unruly hawks as he must have been when being their age, the eldest surviving saying on one occasion that he was no bird to be mewed up [The History of William Marshal]. He said that when spending most of 1175 on English soil after his failed Great Revolt of 1173-74, which he had been pushed to stir up because of such repeated requests and postponed actions, however, in his case the hawk would become neither keener nor more obedient.