Funny, Telling and Thought-Provoking Quotes about Henry the Young King and his Family

Exactly five days and Matthew Strickland's biography of Henry the Young King is out. Just as a kind reminder to all those who haven't pre-ordered it yet. For the time being, I find writing on this blog somehow pointless feeling that the time to redefine some of the views I have hold on Henry is nigh. You can pre-order the book here and here. By remarkable coincidence the publication day is the same day Henry the Young King's parents were married in the cathedral of St Pierre, Poitiers, 864 years ago, on 18 May 1152 (or perhaps it isn't a coincidence at all). 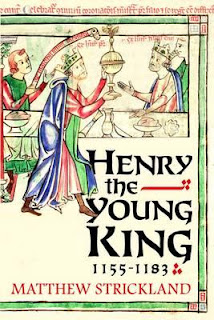 Waiting impatiently for my copy to arrive, I would like to share a few quotes about Henry, his close kin and friends. Some of them are going to show the family members at their royal best (or worst), some reveal obsure facts about them and make us smile, others throw a new light on the family relations. One thing we can be certain of  - they are going to give us food for thought.

On the appearance and character of Henry's great-grandfather King Henry I of England from "The Deeds of the Kings of the English" by William of Malmesbury (1125):

'He was of middle stature, neither unduly short not tall; his hair was black and set back on his forehead; his eyes were mildly bright; his chest brawny; his body well fleshed. He was not personally pugnacious. Fot he seemed to recall the saying of Scipio Africanus:
"My mother bore me to be a commander not a soldier" Therefore he preferred to gain his ends by diplomacy rather than by the sword, and in this he was inferior in wisdom to no king of modern times, and indeed might without exaggeration be said to have in this manner surpassed all his predecessors.'

On the same great-grandfather Henry I, from the Anglo-Saxon Chronicle (1125)

'Henry sent to England and command that all moneyers there were in England should be deprived of their right hands and their testicles, because a pound would not buy a penny's worth at market.'

Excerpt of the anonymous Deeds of Stephen describing Henry's paternal grandmother Empress Matilda and her uncle King David I of Scotland at the time of the Anarchy:

'Along with the other great men, indeed the first of them, he [David] had taken the oath of allegiance to King Henry's daughter Matilda in that king's presence, and he was therefore deeply grieved that Stephen had usurped the crown of England, but as that was settled by the barons without his concurrence, he prudenty awaited the result, watching the course of events. At length he received letters from Matilda, complaining that she had been excluded from her father's will, robbed of her crownwhich had been secured to her and her husband [Geoffrey le Bel of Anjou] by solemn oaths, that the laws were set aside and justice trodden underfoot; and the sworn fealty of the English barons was broken and disregarded. she therefore earnestly and sorrowfully implored him as her kinsmanto succour her in her need, and as her liege vassal to aid her in her distress. the king of Scotland was deeply grieved; and inflamed with zeal for a just cause, the ties of blood and regard for his oath induced him to foment insurrections in England, that by so doing, by God's help, Stephen might be cpmpelled to resign to its rightful owner the crown which it appeared to him, had been unjustly acquired.' ( The Plantagenets Chronicles, p.68)

And one more about the Empress, far from flattering, from Henry of Huntingdon's History of the English:

'But she was swollen with insufferable pride by her success in war, and alienated the affections of nearly everyone. Therefore either by crafty men or by God's will - though all human activity is subject to God's design - she was driven out of London. With a woman's anger, she forthwith ordered the king [Stephen], the Lord's Anointed, to be bound with fetters.'

As we know, eventually Stephen was compelled to resign. Here's a charter describing the 'Treaty of Winchester', 1153, the "deal" that opened the road to the throne of England for Henry the Young King's father

"He [Henry II] was ever on his travels, moving by intorelable stages like a courier and in this respect he showed little mercy to his household, which accompanied him"

Walter Map was not the only one to give a vivid description of the dreadful hardships Henry II's servants had to endure. To read more I recommend the letters of Peter of Blois.

Richard of Devizes, a monk at St Swithun’s, Winchester described Henry's mother Eleanor of Aquitaine upon her return from Spain when she brought Richard’s bride, Berengaria of Navarre with her:

Queen Eleanor, an incomparable woman, beautiful yet virtuous, powerful yet gentle, humble yet keen-witted, qualities which are most rarely found in a woman, who had lived long enough to have had two kings as husbands and two kings as sons**, still tireless in all labours, at whose ability her age might marvel, brought with her the daughter of the king of the Navarrese…

By the two kings as sons Richard meant not Richard I and John, as one may assume- they are still the two most famous and best remembered of Eleanor’s sons- but Henry the Young King and Richard I. Eleanor brought Berengaria in 1191 (so eight years before John became king) and Richard of Devizes completed his Chronicle in 1192.

'People thought is a great pity that he stayed up so little at night and yet slept so late, that he ate and drank too much, and those scoundrels would laugh at him behind his back, asking of one another ‘this greedy gorger William in God's name, what good is he doing here?’ And they asked William de Tancarville his Lord ‘just how are you being served by this troublesome fellow, this devil of a glutton, who's always sleeping when he's not eating? The man is a fool who feeds him.’… The Chamberlain was much displeased with such words but he smiled and kept quiet, and then replied with a few well chosen words: ‘You will see, he'll set the world alight yet… You have no idea of the quality of the man I'm keeping.’

Gerlad of Wales on Henry's younger brother, Richard (On Henry II and his sons, from The Topography of Ireland, Chapters 49-50)

'Besides, the author of nature has joined suffering to the nature it has called into existence. Thus our lion-hearted prince, who is more than a lion, is troubled with a quartan ague, as lions are, as a means of subduing the fierce impulses of his spirit. Quaking under continual accesses of this disorder, but not from fear, his quaking makes the whole world to tremble and to fear likewise. In short, among the several virtues for which he is distinguished, there are three which are incomparably eminent, and shed a peculiar lustre on his character. These are, his brilliant courage; his boundless liberality so worthy of a prince, and gracing so well his other virtues; and his resolute firmness both of mind and word. In conclusion, to sum up much that might be said, in a brief eulogy, he is second to his illustrious brother in age only, and not in merit.'

And on Geoffrey of Brittany and John 'the Lackland':

'Both of them were of rather short stature, a little below the middle height, and for their size were well-shaped enough. Of these, the one is already distinguished by his virtues, and has attained the highest honours; the other will. The one is well versed in military affairs; the other has to be instructed in them. The one is corn in the ear, the other in the blade. The one is already great in action, the other leads us to expect he will be great; for not degenerating from his high origin, he has equaled his most noble brothers in worth as far as his powers admit. Hence whether he originally derived it from the parent stock or from parity [with his brothers], it could not degenerate in his time. The one is an eloquent and astute man, and as he could not easily be deceived, is most prudent, if he would not deceive. In two wars, and in various ways imitating Ulysses as well as Achilles, he has been ever, alas! ungrateful to his father, and in this has trod in the footsteps of his elder brother, too plainly marked. He has more aloes then honey in him; his tongue is smoother than oil; his sweet and persuasive eloquence has enabled him to dissolve the firmest alliances and his powers of language to throw two kingdoms into confusion; for with wonderful industry he assumes all shapes, and dissembles all his designs. But as a man of many words will not be guided in his ways on the earth, the Lord hath not directed his goings, nor multiplied his days.

The other, led away by the fervour of youth and ensnared by its passions, is prone to vice, and rude to his monitors; lending himself to the seductions of his time of life, instead of resisting the impulses of nature. Hitherto, therefore, by reason of his age, he is more given to pleasures than to arms, to dalliance than to endurance, to Juvenile levity, more as yet, than to manly maturity, which he has not attained.'

And on the Young King himslef: just as a note, these lines from Orderic Vitalis the Ecclesiastical History (written 1123-41), about the great household of Hugh d'Avranches, Earl of Chester under William I, might as well been composed to describe Henry the Young King's court:

'An enormous household, which resounded with the noise of a crowd of youths, both noble and common, was always in attendance upon him. Some good men, clerks as well as knights, also lived with him, and he gladly gave them a share in both his labours and his wealth.'

Quite similar to what Bertran de Born wrote many years later about Henry in his planh:

'Noble hospitality and giving without fickle heart, and fair conversation and warm welcome, and a great court, well paid and well kept up, presents and gifts of arms and living without doing wrong, eating to the sound of viol and song, with many a companion bold and mighty among the best.'

Henry was famed for his generosity, but sometimes even his closest friends and companions admitted that:

'It is true that the Young King, in castle and in town, led such a lavish life that, when it came to the end of his stay, he had no idea how to take his leave. When it came to the last day, creditors would appear, men who had supplied him with horses, garments, a nd victuals. This man is owed three hundred pounds; this one a hundred and that one two hundred.”... "My lord has no cash with him, but you shall have it within a month.'

Let me end on this merry note, for the above snippet always brings a smile to my face.


Excerpts and quotes come from: