...a son, Henry, was born in London to King Henry of England and Queen Eleanor on 28 February [1155] and was baptized by Richard bishop of London. (Diceto, Images of History).


Happy Birthday to Henry the Young King who is 858 years old today. I wish I could be at Rouen cathedral at the very moment to pray at his tomb. Instead I want to present my birthday gift, perhaps not as precious as a Norwegian gyrfalcon (Falco rusticolus) would be - the most welcome addition to Henry's Salisbury mews - but still something quite of a value: a few words concerning personages, circumstances and rituals centred around Henry's arrival into this world.

Our Henry was the second son of Henry II of England and Eleanor, Queen of England and Duchess of Aquitaine in her own right (click here to read a short biographical note). At the time of his birth Eleanor was thirty-one* and already a mother of three children, two daughters - Marie (b.1145) and Alix (b.1151) - by her first husband, Louis VII of France, and a son, William (b.1153) by her second husband, Henry Plantagenet. And if for Eleanor William’s birth was a special triumph of her own- with two daughters born in the fifteen years of marriage to Louis Capet, despite accusations that she was unable to produce a son, she was delivered of a healthy boy, future heir to her duchy - her second son must have been a living proof and confirmation that she and her young husband had the Almighty on their side. Shortly before Henry's birth, on 19 December 1154, Eleanor, seven months pregnant- yes, our Henry was certainly there, albeit incognito- was crowned together with her husband at Westminster Abbey by Archbishop Theobald of Canterbury. They celebrated Christmas 1154 at Bermondsey manor, where the newly crowned king held council to discuss and agree upon 'a general demolition of castles erected during the late [Stephen's] reign, and the expulsion of the Flandrian adventurers who had overrun the kingdom'. [Eyton, p. 2] 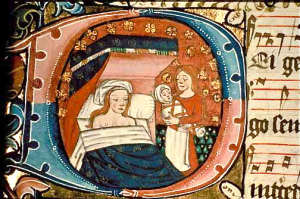 When Henry was born his father was away, busily restoring order in his realm (York - Scarborough - Nottinghamshire - the Western Counties). Having suceeded Stephen as king of England, at two-and-twenty Henry II, as William of Newburgh put it in his History, 'possessed the dignity of more extensive empire than any other who had hitherto reigned in England, for it extended from the farthest boundary od Scotland to the Pyrenean mountains'. He did not return south until c. 27 March when he held a great council at London, 'at which many bishops and abbots sought renewal and confirmation of their charters.' [Eyton, p.6]. Immediately after his return he must have seen his second-born for the first time, held him in his arms and presented him proudly to the nobles of the realm.
(In the opening days of April Henry would arrange yet one more meeting, the one of great importance. Both his sons, William and Henry would be taken to Wallingford, where their father would call 'together the barons and bishops of the realm to swear allegiance to his eldest son and, in case of William’s death, to Henry as his second heir', a ceremony which neither of the boys would remember. Not a year would pass since the occasion, when little William, a few months shy of his third birthday would fall ill and die, the death that for his younger brother would mean a sudden change of fortune: as the eldest surviving son he would become his father’s heir).

Henry was probably born at Bermondsey manor where his parents had been staying since their arrival in England in the opening days of December 1154. K. Spaltro and N. Bridge in their Royals of England calls it 'Saxon palace opposite the Tower of London' and indeed the initial manor was held by Harold II before it went to the Norman kings (it could be found in the royal demesne in 1086). It was also a site where the first post-Conquest monastic house plus the manor were founded by William II. Possibly, as Rose Graham pointed out, he intended it to become his burial church. Bermondsey was a daughter-house of the Cluniac La-Charite-sur-Loire - William granted the church of St Saviour to it- a view supported by the patronage William's successors, Henry I and Stephen extended to the house meaning they regarded it as a royal foundation. I have been wondering whether the 'Saxon palace' and William's manor was the same building, or, which sounds more probable, two separate manors. There is also a case of one Ailwin Child, a rich citizen of London, who granted rents in London itself to La Charite as early as 1082 and who might have bought the manor from the king in order to donate it.

Henry was baptized by Richard de Belmeis II, bishop of London (1152-1162), former canon and archdeacon of Middlesex and nephew of the former bishop, Richard de Belmeis I appointed in 1108 by Henry I. The London see and chapter were occupied by a Belmeis - Foliot dynasty (famous Gilbert Foliot was also related to the Belmeis clan) for a large part of the twelfth century (1108-1127 and 1152-1187). The ceremony itself took place shortly after birth - as I'm reading 'not later than eight days afterwards' - in case the baby should die before given the chance of salvation which only the baptism could assure. The baptism of a child of royal or noble birth was usually carried out in a private chapel in the presence of godparents or 'gosspis', who were supposed to be the child's spiritual guardians and instructors throughout its life. The main godparent of the same sex as the baby named the child and lifted it out of the font. The name was usually a family name and thus the new-born Henry was christened after his great- grandfather and father. Let me quote Nicholas Orme's wonderful From Childhood to Chivalry to explain what our little Henry had been through during the ceremony: 'In accordance with the medieval rite of baptism, salt was put into its [baby's] mouth, its ears and nostrils were wetted with saliva, oiled was smeared on its breast and back, and it was totally immersed in the font three times: once on the right side, once on the left and once face downwards'. (p.1) Thank God he was too little to remember what they did to him that very day.

Let me list the most precious, albeit potshumous, gifts the Young King received:

The History of William Marshal by one John commissioned by William Marshal's eldest son and namesake in 1219
Otia Imperialia by Gervase of Tilbury, Henry's former chaplain
“On the Instruction of a Prince: the Upbringing of Henry, the Young King” by Professor Matthew Strickland
Celebrity in the Tournament World, the whole chapter in Tournament by Professor David Crouch
Devil's Brood by Sharon Kay Penman

From Childhood to Chivalry. The Education of the English Kings and Aristocracy, 1066-1530 by Nicholas Orme. Google Books.

London, 800-1216: The Shaping of a City by Christopher Brooke and Gilian Keir. University of California Press, 1975.

William Rufus and the Benedictine Order by Emma Mason in Anglo-Norman Studies 21: Proceedings of the battle Conference 1991 ed. by Christopher Harper-Bill. Google Books.

The Kings and Their Hawks by Robin s. Oggins.Yale University Press, 2004.

Bishop and Chapter in Twelfth-Century England by Everett U. Crosby. Google Books.