Today I am very happy to welcome the fellow admirer of Sharon Kay Penman's novels, CrazyCris, who kindly agreed to share her thoughts and impressions after reading Devil's Brood, the last part of Ms. Penman's Angevin trilogy. You are in for a... crazy ride!

With a title like that you might expect a fantastical tale of some demon spawn, but then you wouldn’t be reading about it here at the Young King’s court, now would you? Nope. This is a much more terre à terre tale. That of quarrelsome children and stubborn parents, but on a much grander scale than that which we’re used to today, for these children’s quarrels played out across half of France in bloody fields of battle, mighty sieges and include epic tales of betrayal (but also touching scenes of loyalty amongst some of their retainers). Betrayal of each other, betrayal of their oaths, betrayal of their father… It’s almost enough to make you believe the family legend that they were descendants of the Devil via his "demonic" daughter Mélusine... 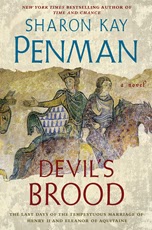 Henry, Richard, Geoffrey and John. Three crowned Kings (although one never got to reign) and a Duke. “The Devil’s Brood” were the quarrelsome male offspring of Henry, Count of Anjou, Duke of Normandy and King of England, and his legendary wife Aliénor of Aquitaine (Eleanor in English, but I’ve always preferred the French version, which is after all what she would have been called in her lifetime!). Such larger than life figures, all of them. How could anyone possibly do them justice on paper? By bringing them back down to earth and looking at them all through a magnifying glass: parents, children, associates… By examining their strengths and weaknesses and most of all their motivations. By making them feel so alive that you could almost believe you know them. What could possibly drive these brothers to constantly fight against each other? Why would a once loyal wife help her sons rebel against their father? As hard as it might seem to understand it all before you start reading, watching it unfold before your eyes makes the result seem inevitable.

It’s taken me about two weeks to read, a bit longer than the previous books in the trilogy because the final third (pretty much after the Young King’s death) was just so… heavy? Not sure which word I’m looking for… Poor Hal injected quite a bit of positive energy into the story, as he did in the lives of the people around him (well, most of them. I doubt Richard would agree). After his death the family squabbles seemed even more pointless. I was like “Come on people! You’ve already lost one family member to this mess! It’s time to come together and heal your wounds! Can’t you see the only one who will benefit from this is that snake Philippe?!” But nooooo! Because Henry was pretty much incapable of understanding his sons, and they were frustrated with his empty promises and felt they couldn’t trust him to do right by them (and were bitter towards each other), they just kept at the hamster wheel of rebellions and betrayals and battles and… argh! Was there ever a family more in need of therapy?! Sheesh! I found myself wanting to slap them all silly and force them to come to terms with each other before it was too late! And that final betrayal… damn! That one definitely cannot be justified by any means. I’m sure it broke Henry’s heart just before he died…

So those are my thoughts now that I’ve just finished the book. But going through what I’ve written on Facebook I’d like to reprise a couple of things I wrote spontaneously in the middle of sleep-deprived nights when I couldn’t put the damn thing down:

“First it was Joanna and Richard in the Holy Land (note: first SKP book I read was Lionheart), then Ranulf fighting for Maude, then Harry and Eleanor in all their glory… Now it’s their marriage woes and rebellious sons keeping me up at night!!! Will someone please tell these blasted Angevins to let me get some sleep?!?!?!”

“The Devil’s Brood has me in its clutches and won’t let me go, even though I know how the story plays out, it’s just so ALIVE I’m mesmerised and can’t stop reading!!!”

“The Young King is dead, and I haven’t been able to tear my eyes away from his death throes this past hour. The whole drama behind The Devil’s Brood is heart breaking! I know much of it is Henry’s fault, but I feel so bad for him right now! One betrayal after another... (…) Every time Henry commits another blunder, it’s like watching a train wreck you know is going to happen but can do nothing to stop! It’s mesmerising but oh so frustrating!”

I have to add that after reading this book I have a newfound appreciation for these tragic siblings. I was already quite familiar with Richard’s story (as the favourite son of my favourite historical figure, how could I not be?), but knew next to nothing about the others! My opinion of John remains strongly negative, but Hal seems like a jolly fellow at whose court I would have loved to hang out, and quite frankly I think Geoffrey would have made the best king of the lot had he been given the chance!

Thanks so much Kasia for inviting me to hang out in the Young King’s Court and share my thoughts! And all hail Sharon for writing such a brilliant book (and well, trilogy!) that was incredibly ALIVE! 

Cristina Beans Picón a.k.a. CrazyCris in the Blogosphere.