November 1181: Three Sons Bearing Witness to the Fruitfulness of Their Mother

On 1 December 1135, Henry the Young King's great-grandfather King Henry I died. You can read about his death here, in one of my previous posts. Now let me share with you a special snippet of Ralph of Diceto's Images of History. Why do I find it so very special, you may wonder. There are a few things that have caught my attention and are well worth discussing here. Over to Ralph...

Philip count of Flanders, when he heard how Philip king of France and Henry king of England were so closely associated, raised up as many of the Flemings as he could to fight against his liege lord... having no regard for the tender age of his lord the king and quite unmindful of the assurances he had given to King Louis that he would watch over, protect and guide his son according to what is right, attacked Noyon aith as large force as he could muster. They devastated the area around Senlis, demolishing houses and uprooting vineyards.

Young King Henry, son of the elder king, Richard duke of Aquitaine and Geoffrey duke of Brittany- three sons bearing witness to the fruitfulness of their mother- were eager to make up for the absence of the king their father by giving proof of their own valour. Planning to oppose with all their might the designs of those wicked men who desired to oppress the innocent young king of France, they gathered a great force from all the land nad came as a united band to his aid.

Firstly and most importantly, the text has a symbolic meaning to bear: it shows that when the need arose the three eldest sons of Eleanor of Aquitaine and Henry II, contrarily to what had been said about them, could be united in supporting a common cause and be formidably efficient in doing so. Such a need arose in 1181 when the young and vulnerable Capetian king, Philippe, was facing a threat imposed on him by his one time mentor, Philip of Alsace, the count of Flanders. Again, as it often happens, when discussing the Angevin-French-Flemish relations, all was a family matter. From Henry the Young King's perspective, in 1181 he was supporting his brother-in-law while opposing his cousin. Philippe was a younger half-brother of Henry the Young King's queen, Marguerite, whereas Philip of Alsace was a son of Sybilla of Anjou, the aunt of Henry II. To make things even more complicated, Marie, the countess of Champagne and sister to both kings, young Henry and Philippe, allied herself with the count of Flanders against her young half-brother. 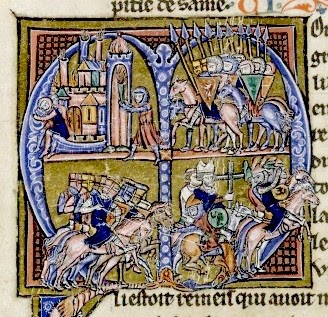 Count Philip of Flanders at the siege of Gezer (1177)

When Henry II was sending his three sons to represent him at young Philippe's coronation in 1179, he couln't have forseen that two years later he would be sending them to fight a war for his young French overlord. In 1179, during the coronation ceremony, Henry the Young King carried Philippe’s crown in the procession and supported his head during the coronation. In his Images of History Ralph of Diceto told the story of how the Young Henry, standing close behind his brother-in-law, had bent forward to hold the crown upon the boy’s head, and thus relieved him of its weight. ‘This implied’, Diceto observed, ‘that if ever the French needed help they could safely ask for it from one who had helped at their king’s coronation’. Kate Norgate interpreted this act of kindness as the symbol and harbinger of the later political attitude of Henry’s father towards the boy-king of t the outset Henry II was the chief protector of the young Capetian king, which, considering all his past conflicts with Philippe's father, king Louis VII, I find highly ironic. On the occassion of the coronation, Count Philip of Flanders "claimed the right of bearing the royal sword" in the opening procession as Gilbert of Mons, the chancellor of Baldwin V of Hainaut, observed. Gilbert was well informed because his lord was also present at St Denis on All Saints' Day 1179. Later, at the banquet that followed, Philip of Flanders fulfilled the honoured duties of steward. The role he played during the coronation itself and afterwards harbingered his later highly influencial position at Philippe's court. Let's face it - in the opening phase of the latter's reign, the count of Flanders was the real power behind the French throne. Genrally he was one of the most powerful man in France, his county being, next to Normandy, the kingdom's richest and best-governed principality. The count himself exercised political authority unusual for his day. He could boast, for instance, the earliest chancery among the lay princes of the then France. What's more, in 1164, thanks to the marriage with Henry the Young King's first cousin Elisabeth, he was able, in the name of his wife, to take possession of her county Vermandois with its dependencies, Amiens and Valois, thus advancing dangerously close to Paris and posing a potential threat to its security. Shrewd and often ruthless politician, he easily entangled the young and inexperienced Capetian king in the web of his own intrigues and ambitious schemes, achiving his most striking success in the spring of 1180, when he arranged a marriage between Philippe and his niece, Isabelle of Hainaut. She was the daughter of Philip's sister Marguerite and the afore-mentioned Baldwin of Hainaut. Needless to say, the match provided the count with an influential relative at the French court. The young Capet's close ties with the Flemish faction naturally alienated his mother's family, the house of Champagne and Blois. The situation became so serious that Henry II had to intervene on the Queen Mother's behalf. Foiled by Henry II from manipulating Philippe, the count of Flanders turned to open defiance. As we already know, in the military conflict that ensued in the closing days of November 1181 Philippe was supported by the three eldest sons of Henry II.

As the events in the narrative show, quite cotradictorily to what mainstream historians say about the Young King, he turned out to be a good military commander. If we are to believe the chronicler's words, he and the young Philippe leading the joint forces "inflicted severe losses on the Duke of Burgundy, the countess of Champagne, sister to both kings, and their accomplices, whose forces they again outnumbered". They forced the count to retreat. At this point we get a precious little nugget of information from the author: "The count feared to meet King Henry, son of the king of England, face to face and shut himself up in the castle of Crepy". What's so special about this one, you may ask. On the outside, nothing. Philip just feared his opponent because the latter outnumbered him, isn't it clear? It was not exactly so: the count feared to meet the young king not only because they were kin, but also because they were close friends and companions on the tournament circuits. I would even risk a statement that there were no other two men in their world, who would understand each other better. They shared passion for tournaments and were both avid patrons and participants, after all. From Philip's perspective it must have been extremely difficult to meet his young relative and friend face to face. Perhaps due to Henry's personal charm and charisma, more formidable weapon than military skills and political acumen sometimes. In my view, it was probably the first time that the old fox came close to blushing.

Lastly, I would like to direct your attention to the title of this post, being a quote from Diceto. I hope - although it was rather not possible- that Queen Eleanor read the words and that they filled her heart with pride. "Three Sons Bearing Witness to the Fruitfulness of Their Mother" - would have meant a lot to her even if Ralph of Diceto had a habit of using similar rather conventional phrase to describe other contemporary queens, who were lucky enough to provide their kingdoms with male heirs. Why would the words mean a lot to her? The answer is simple: when she was the queen of France and wife to Louis VII she was said to be unable to produce a son. During fifteen years of their marriage she gave Louis only two daughters. Giving birth to five sons by her second husband Henry must have been a special triumph of her own. I wonder whether she knew of their joint 1181 campaign - perhaps she received the news later. Let's not forget that at the time she was still her husband's prisoner.