Musings on the 796th Anniversary of William Marshal's Death

By God’s sword, if all abandoned the king, do you know what I would do? I would carry him on my shoulders step by step, from island to island, from country to country, and I would not fail him not even if it meant begging my bread. (The History of William Marshal in the Platagenet Chronicles, p.323)

Exactly 796 years ago, on 14 May 1219, William Marshal lay dying at his manor house of Caversham. He lived his life to the full, becoming the epitome of chivalry and loyalty. Never in his long and active career had he abandoned or failed the king he served, and he happened to serve five English monarchs - I am not counting King Stephen, to whom he had been handed over as a hostage at the siege of Newbury (1152) and with whom he apparently made friends. He had been with his first overlord, Henry the Young King, till the very end, promising to take his crusader cloak to the Holy Sepulchre in Jerusalem, the promise he fulfilled; he had been at Chinon with King Henry II, when the latter humiliated and abandoned by all breathed his last breath; he had faithfully served King Richard I, who, among other honours, appointed him a member of a council of regency upon his departure for the Holy Land and who, already on his death-bed, designated him the custodian of the royal treasure; and William, as one of few, did not abandon the “bad” King John and the latter’s minor son in their greatest need - during the First Barons’ War and in the first years of Henry III's reign, serving as regent for the young king. 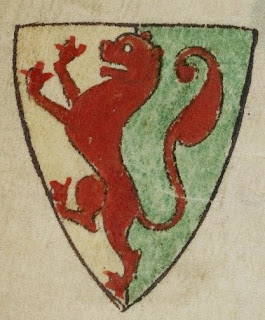 13th-century depiction by Matthew Paris of the Earl of Pembroke's coat of arms (source: Wikipedia)

I am not going to write about William's epic life with all its twists and turns, this I leave to the experts. Ms Elizabeth Chadwick not only made William proud in her two novels, The Greatest Knight and The Scarlet Lion, but also wrote about him many times on her blog. Here is one of her posts. And here is the latest one about his last days. May them be the tribute to this remarkable man.

As far as I am concerned, I just want to share my favourite excerpt of the History of William Marshal, the poem on an epic scale commissioned by William's eldest son and namesake to celebrate his late father’s epic life. We meet the Marshal in his late sixties in it, still vigorous and full of energy, fighting at the Battle of Lincoln (1217) as if he had been a young knight again.
Just a note: even on his death bed, William first and foremost thought about his household knights. On 13 May, the day before he died, when asked what to do with the rich robes which lay in his wardrobe, the Earl, ignoring his clerk Philip’s suggestion, would have them distributed to them rather than handed over to the Church. “Pentecost is at hand, and my knights ought to have their new robes. This will be the last time that I will supply them, yet you seek to prevent me from doing it” (from The History, in Painter, p.287-88).

“Ride on!” the Marshal then said
to all his men, “for you will see them
beaten in a short while.
Shame be upon the head of him who waits longer!”
The bishop said to him: “My dear lord,
listen a while to what I wish to say to you.
Wait in there for your men,
for it will be a finer and more proper thing,
and far safer, I think,
if we all rode there as a body.
That is what is fitting, I believe,
and, at the same time, our enemies will have greater fear of us
when they see us all together;
our arrival will cost them dearly.”
The truth is that the Marshal
had no inclination to accept these words of advice.
Instead, more swiftly than a merlin could fly,
he spurred on his horse,
and all those in his company
were emboldened by what they saw him do.
A young lad then said to him:
“In God’s name, my dear lord, wait for us;
you haven’t got your helmet on.”