In the opening months of 1183 Henry was busily occupied with wresting control of the Duchy of Aquitaine from his younger brother Richard. With Geoffrey, Duke of Brittany, another younger brother, and an ardent support of Poitevan barons discontent with Richard’s iron rule, the Young King was desperate to win a portion of the family domains for himself. He stood in opposition not only to Richard, who at that time was facing a formidable French-Burgundian-Toulousain coalition backing up the Young King, but also to his father king Henry II of England, who hastened to Richard’s rescue. It was the second time that Henry took up arms against his father, the King. The underlying cause of this revolt was the same as in 1173: he did not want to be a king only in name. In 1170 his father had him crowned a king-associate of England, but in reality, the Young King had no land of his own and no power to rule, the great number of his charters from that period being only either homologues or confirmations of his father’s charters, and his household consisting of the officials of his father’s choosing. In fact, his younger brothers, Richard, Duke of Aquitaine and Geoffrey, Duke of Brittany enjoyed more real power than he, the eldest one. Thus, in taking over Aquitaine, Richard’s maternal inheritance, the Young King saw his chance of gaining real authority and financial independence. With his mighty allies he might have achieved this very goal had he not contracted bloody flux (dysentery). On 26 May, in the town of Uzerche, he suffered from - as it may seem - the first bout of illness, but he quickly came to himself. In fact he was well enough to pillage the shrine of St Amadour at Rocamadour. 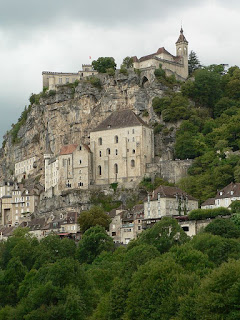 Together with the booty he carried off a sword which was said to be Durendal, the weapon of the legendary hero, Roland. There were precious relics in its hilt: the tooth of St Peter, the blood of St Basil, hair of St Denis and a piece of the robe of the Blessed Virgin. As Emma Mason points out in "The Hero's Invincible Weapon: an Aspect of Angevin Propaganda”: 'If the Young King accepted that his booty was indeed the Durendal of Roland, then he would believe himself to be under the protection of these powerful relics. Perhaps perceiving himself as a hero-figure in his contest against his father, he might prize an object which would be widely recognized as an emotive symbol... In his looting of Rocamadour, the Young King was perhaps seeking not only material reinforcement, but also the means of projecting a charismatic image' (pp. 126-127). Looting itself certainly could not have helped him, but the sword of Roland could. Richard often employed the projection of a heroic image as a part of his military tactics. As it turned out, however, Durendal proved to be useless in protecting Henry against more dangerous foe, whose severe and full-scale attack launched from within proved fatal. Dysentery was the curse of the medieval warfare, wrecking havoc and taking its toll in the military camps. On Tuesday, the 7th of June, it was clear that the Young King was not going to survive. One can only try to imagine what scenes accompanied breaking of this sad news - Henry's household knights must have been utterly distraught. I completely disagree with the author Sharon Kay Penman, who in the King's Ransom - the novel about Henry's brother Richard I Couer de Lion - says that neither Henry II nor Henry the Young King inspired such loyalty from their men as Richard did. It is enough to read about their last hours to see they had a few absolutely loyal men with them. 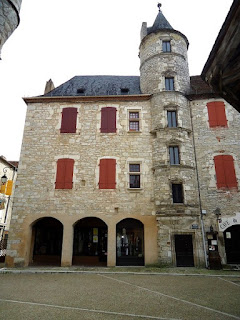 Maison Fabri, Martel, where Henry the Young King spent the last days of his life.

But back to the little town of Martel, Limousin, deep in the south of Aquitaine, where Henry just realised it was time to say "Farewell" and prepare himself to face the Maker. Taking into account the working of the twelfth-century mind, he must have believed himself a condemned criminal, and his illness a divine punishment, especially if he was the sole victim of the malady (I was unable to determine if there were others in Henry's household and troops who succumbed to it as well at the time). For this reason he sought rescue in all possible ways of repentance. After all, he had not only betrayed his father, but also pillaged the most sacred shrines in Western France (St Martial near Limoges, Grandmont and St Amadour at Rocamadour). To make amends and to show how he regretted, he prostrated himself naked on the floor, and before the crucifix confessed his sins to Gerald, Bishop of Cahors. As death drew near he had a hair shirt put on him and asked to be dragged out of bed by a noose wound round his neck. ‘By this cord,’ he was to say, ‘do I deliver myself, an unworthy, culpable, and guilty sinner, unto you, the ministers of God, beseeching that our Lord Jesus Christ, who remitted his sins to the thief when confessing upon the cross, will, through your prayers, and through his ineffable mercy, have compassion upon my most wretched soul!’ According to his wishes, he was then placed on a bed of ashes on the floor, with stones under his head and his feet, ‘in the manner which St Martin prescribed for monks’. He still had four days to live.


A detailed account of Henry's unfortunate campaign on 11 June.