Bur-le-Roi and Other April Anniversaries

1 April 1175. After the Great Rebellion of 1173-74 had been won decisively by Henry II, his three eldest sons could do little else but accept their father’s conditions. Those were determined by the so called Treaty of Falaise (September 1174). On 1 April 1175 Henry the Young King did homage to his father at Bur-le-Roi, one of Henry II's favourite residences, and the two kings were reconciled.
1 April 1179. Henry the Young King and Henry II kept Easter together at Winchester. The Young King had returned to England after three years' absence. He had embarked at Wissant on 26 February (Ralph of Diceto). Roger of Howden gives the Midlent (c.11 March) as the arrival date. If we are to trust Diceto, Henry reached the English shore just in time to celebrate his twenty-fourth birthday in the comapny of his father.

1 April 1204. Henry’s mother, Eleanor, Queen of England and Duchess of Aquitaine in her own right died, having reached the advanced (and unusual for the times she lived in) age of eighty. She outlived all but two of her ten children. She was one of the most remarkable figures of the twelfth-century Europe, not only a queen of two kings, but also a mother, shrewd politician and patron of the arts.

1 April 1212. Countess Petronella of Leicester, a woman with a “man’s spirit”, who had firmly stood by her husband’s side in the Great Revolt of 1173-74, died on this day. Robert, Earl of Leicester was one of young Henry’s chief supporters on English soil. His wife, Petronella was described as the one who ‘by her decision, talents, and energy, was a fit match for her warlike earl’.

c. 2 April 1175. When the aforementioned ceremony at Bur-le-Roi was over the father and the son parted. The old king went to Valoins, and the young paid a visit to the court of his father-in-law, Louis VII of France (the meeting at Bur marked the beginning of what was to become the Young King's "lost" year, as he would have probably called it himself).

4 April 1176. Henry II and his three sons, Henry the Young King, Richard and Geoffrey, kept Easter at Winchester. Henry the Young King and his wife, Marguerite, were waiting at Porchester for a fair weather to cross the Narrow Sea, when Henry was sent for c.31 March to join his father. It is possible that the Young Queen also joiuned the court at Winchester. Richard and Geoffrey landed at Southampton on 2 April and arrived in Winchester on 3 April (Eyton). 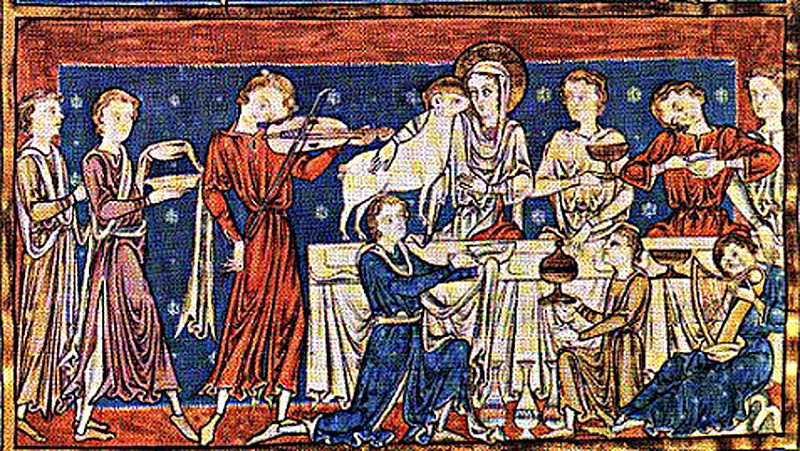 c.5 April 1180. Henry the Young King came to England, to Reading, to swear to "the observance of his father's will and pleasure” (Eyton, p.231) and consult him about the situation at the French court, where the young Philippe Capet (crowned on 1 November 1179) together with Philip of Flanders acted against Philippe's maternal family.

8 April 1183. Henry the Young King, who had escaped from Chinon Castle on 5 March, triggering what was to become known as the Great Revolt, spent Easter at his father-in-law, Louis VII of France's court. Sometime during his escape he was knighted by William Marshal. You can read about the ceremony here.

10 April 1155. Henry's father, Henry II, held a great council at Wallingford, where the nobles and bishops of the realm recognized the succession rights of his young sons, William (aged 2) and Henry (one and a half month old). We can safely call the Wallingford council the young Henry's first official meeting with the barons and clergy.

10 April 1179. Henry II held a great council at Windsor (Eyton, p.226), where "the establishment of the circuit for the justices in eyre was done by the magnates' common counsel 'and in the presence of the king, his son' (Matthew Strickland in Henry II: New Interpretations, p.207)

c.10 April 1180. After the aforementioned meeting at Reading, the Young King was probably staying with his father at Winchester, before they both left for Normandy on c.15 April, the elder king from Portsmouth, the younger from Dover. Before they left, Henry II appointed Ranulf de Glanvill High-Justiciar, or Viceroy, of England (Eyton, p.231)

11 April 1199. Palm Sunday. Richard I [Couer de Lion]'s Fontevrault funeral ceremony was conducted by Hugh, bishop of Lincoln. His remains, together with the Crown and regalia he had worn during his crown-wearing at Winchester (17 April 1194) were buried at his father's feet. Richard's heart was buried at Rouen next to his elder brother, Henry the Young King. His brains and entrails went to the abbey of Charroux.

15 April 1173. According to Eyton this is the date given for "the outbreak of Prince Henry's mature rebellion” (p.172). By rebellion he means the Great Revolt of 1173-74 against Henry II, of course, in which the young Henry was supported by his mother, Eleanor of Aquitaine, his younger brothers, Richard and Geoffrey, his father-in-law, Louis VII of France, but also by William I of Scotland, Philip of Flanders and Matthew of Bolougne, Henri of Champagne and Theobald of Blois, and many other nobles dissatisfied with his father's rule. Among the Young King's English partisans were: Hugh of Chester, Robert of Leicester, Robert, Earl Ferrers, Roger de Mowbray, Thomas de Muscamp, Robert de Lund, Richard de Morvill, Gervase Paynel. As a matter of fact Henry's household knights, with William Marshal, Robert de Tresgoz, Gerald Talbot and Hasculf de Saint-Hilaire (the latter was sent away from Henry's court by Henry II earlier in the year) all took his side.

c. 17 April 1183. Henry the Young King, desperately in need of means to pay off his mercenaries in the war he was waging against his brother Richard, plundered the shrine of Saint Martial, Limoges, and, after paying for his men went to assist Aimar Taillafer of Angouleme, one of his allies.

19 April 1164. It is highly probable that the nine-year-old Henry was present at the consecration of Reading Abbey, which housed the "glorious mausoleum” (Herbert of Bosham) of its founder, Henry's paternal great-grandfather, Henry I. Most importantly for the prince it was where his elder brother William (1153-1156) was buried at the feet of Henry I.

19 April 1176. After spending Easter at Winchester in his father's company, Henry the Young King joined his wife at Porchester and they embarked for Normandy. 20 April 1176. They landed safely at Barfleur and proceeded to the court of Marguerite's father, Louis VII. Since then Henry was to visit England only occasionaly. As Ralph of Diceto reported: "Young King Henry, the king's son, left England and passed three years in tournaments, spending a lot of money. While he was rushing around all over France he put aside the royal majesty and was transformed from a king into a knight, carrying off victory in various meetings. His popularity made him famous; the old king was happier counting up and admiring his victories...” (quite a different approach from that of other chroniclers of the time, who criticized the young Henry for his tournament passion and claimed that his father also found it highly displeasing).

20 April 1179. Henry and his father kept Penetcost together in England, where exactly it is not stated (Eyton, p.227). In late February/early March Henry came to his father's court after three years' absence. As Eyton points out during his short stay (till c. 22 April) Henry probably visited Worcestershire, for the sheriff of that county charged Et Henrico Regi filio Regis 50 marcas per breve Regis... D... at quietanda vadia egis Franciæ 20 marcas.

22 April 1175. Henry and his father were at Caen where they were visited by Philip of Flanders, the cousin and the Young King's one time ally in the Great Revolt of 1173-74, who, on Good Friday (11 April) had taken the Cross.

22 April 1179. After spending Easter and Pentecost in England with his father, Henry the Young King crossed to Wissant.

25 April 1199. Henry the Young King's younger brother, John, after Richard I's untimely death (6 April), was acclaimed duke of Normandy and invested with a coronet of golden roses at Rouen. One of his first acts as a duke of Normandy was to raze the city of Le Mans to the ground in revenge for that city transferring its allegiance to his nephew, Arthur of Brittany.