In the opening days of May 1179, Richard, Duke of Aquitaine, the younger brother of Henry the Young King, was besieging Taillebourg Castle. The fortress, then held by one of Richard's barons, Geoffrey de Rancon, was considered so impregnable that no one before had even try to lay siege to it. Richard took it in four days. In the opening days of May 2014 my friend , Joan Battistuzzi, was writing the review of the freshly read A King's Ransom by Sharon Kay Penman. The book, published on 4 March 2014, is the last in Ms. Penman's brilliant Angevin series. Joan kindly agreed to share her thoughts and impressions with Henry the Young King's readers and we are very happy to welcome her to our humble abode. Over to you, Joan...

Sharon Kay Penman's recently published, A King's Ransom, is that lovely rarity, a perfect novel.  In her continuing saga of Richard the Lionheart, who leaves the Holy Land only to end up at the notorious Trifels Castle as Heinrich von Hohenstaufen's prisoner, Ms. Penman has surpassed even her own celebrated brilliance.  The beauty, power, and poignancy of this passionate novel took my breath away and I'm not sure I've yet recovered, or even want to. 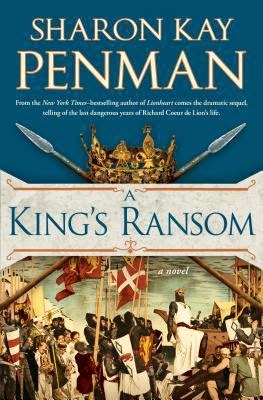 Page after page, an incredible energy carries us along;  we encounter characters carved out with the precision of a sculptor's chisel, dialogue dripping with sarcasm, color-saturated scenes and imagery, the author's own razor-sharp lawyer's mind coming into play at Richard's trial.  And always, the signature Penman wry humor, usually disbursed from the Angevin quarter!

Ransom is also a story of circles closing;  with echoes from the past, quiet reflections of lives lived, inner peace made. Most importantly, we are part of Ms. Penman's personal journey as she courses her final arc with her beloved Angevins.

During Richard's imprisonment throughout the first half of the book, we witness a legendary warrior king brought to his knees, a King's shame.  In his dealings with his jailer, Richard faces a new type of warfare, a new game, even as old battles resurface to haunt him (and us) in visionary dreams.  Henry, his father, pays him a visit, with the admonition, "Save my empire.  Do not let my life's work become dust on the wind."  However, Henry fails to answer the one question tormenting his son.......why God has forsaken him to this hell on earth.  "Because of my sins against you?" goes unanswered.

What Henry cannot offer, even from the grave, Eleanor, mother of Richard, unfailingly takes on for this favored son, and she works relentlessly to raise the ransom to free him and to aid in saving their dynasty.  We first encounter Eleanor of Acquitaine, who stands in high relief throughout the novel, in an exquisite "portrait miniature", another Penman hallmark;  a perfectly distilled essence of her life, her family with Henry, who she is.  Rereading this gem of approximately 3 pages still brings shivers.

Of the other important women in Richard's life, his own Berenguela, his "little dove", does not fare well.  But fortune smiles on Richard's beautiful sister Joanna, as a passionate romance with the irresistible Raimond de St. Gilles bursts into flame.  Alas, they are separated for 3 years and we are left hanging for dear life onto, "Farewell, my beautiful coward." till they reunite with a kiss pressed into her palm and Raimond claims her for wife.

Though tear-drenched as I ended the Epilogue, strangely I had to smile.  I felt such an incredibly deep sense of satisfaction, fulfillment, and gratitude.  We are in your debt, Ms. Penman, for this treasure.