In the spring of 1183 Henry the Young King was leading military campaign against his younger brother Richard [later Lionheart] and his father, Henry II, treading the path that was to be his last. On 23 May, together with his knights and mercenaries, he seized control of Richard’s castle at Aixe, hollow victory since the Duke and his soldiers had already abandoned the keep. Three days later, on 26 May in Caen, the archbishop of Canterbury and the bishops of Bayeux, Evreux, Lisieux, Sees and Rochester, acting on Henry II’s orders, excommunicated all who “impeded the making of peace between the king and his sons”. All with the exception of the Young King. Henry could not have known that*. He was in the town of Uzerche, suffering from- as it may seem- the first bout of illness which was to kill him seventeen days later. He quickly came to himself, though, and joined forces with Hugh of Burgundy and Raymond V of Tolouse, his much-awaited allies.

On a merrier note, here are a few facts about the Young King that you may find quite interesting. Just to lighten the mood. 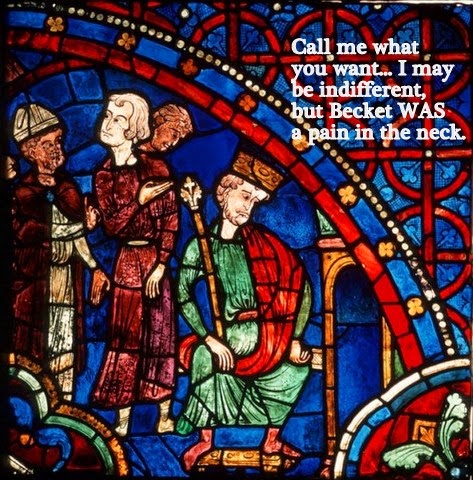 Henry was placed in Thomas Becket's household shortly before or in 1162 only to be removed in October 1163 as a sign of his father's growing displeasure towards his former chancellor and friend. But before this happened the prince representing his father. gave formal consent to his tutor's appointement as archbishop. On 3 June 1162 he witnessed Becket’s consecration at Canterbury. What he must have witnessed too was his tutor’s almost day-to-day transformation from the worldly chancellor famous for his lavish household and his impressive wardrobe into a monk exercising both his flesh and soul. After Henry's father and Becket fell out the latter left England in November 1164 to remain in exile until December 1170. Upon his return he tried to contact with his one-time ward. He set off for Winchester, when the Young King was residing, to pay respects. Knowing Henry’s love for horses Thomas brought with him 'three costly chargers, of wondrous speed, beautiful in form, high-stepping, their delicate flanks rippling as they walked, their housing worked with flowers in various colours, which he intended to give as a gift to his new lord.’ (William fitz Stephen in Meade, p.313-14). He sent Richard of Dover ahead to announce his arrival. When already in Winchester Richard was met with a cool reception. The fifteen-year-old king’s guardians, officials and courtiers were mostly hostile to the Archbishop and took care to reduce his access to their young lord. Thus the archbishop managed to travel only as far as London where he was halted by a messenger from the Young King, who forbade him to continue the progress. Thomas was to return to Canterbury immediately. The hostile reception must have been the result of Becket's reaction to Henry's coronation earlier in the year. The Archbishop had found it illegal and excommunicated the bishops who crowned the prince in his absence. No wonder Henry refused to meet him. 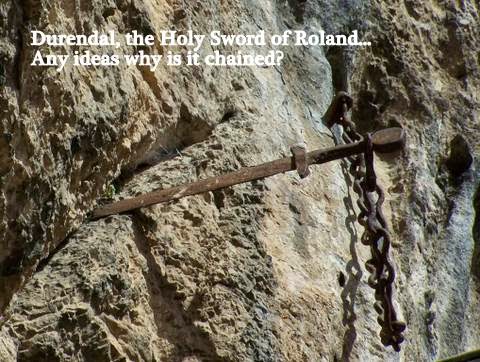 Durendal now on display at Rocamadour

During the afore-mentioned campaign of 1183 lacking the means to pay off his mercenaries Henry pillaged some of the most sacred sanctuaries of Western France. One of them was the shrine of St Amadour at Rocamadour. Together with the booty Henry carried off a sword which was said to be Durendal, the weapon of the legendary hero, Roland**. There were precious relics in its hilt: the tooth of St Peter, the blood of St Basil, hair of St Denis and a piece of the robe of the Blessed Virgin. As Emma Mason points out:
'If the Young King accepted that his booty was indeed the Durendal of Roland, then he would believe himself to be under the protection of these powerful relics. Perhaps perceiving himself as a hero-figure in his contest against his father, he might prize an object which would be widely recognized as an emotive symbol... In his looting of Rocamadour, the Young King was perhaps seeking not only material reinforcement, but also the means of projecting a charismatic image' (in "The Hero's Invincible Weapon: an Aspect of Angevin Propaganda”, p. 126-127). Looting itself certainly could not have helped him, but the sword of Roland could. Richard often employed the projection of a heroic image as a part of his military tactics. If Richard could, why not Henry? 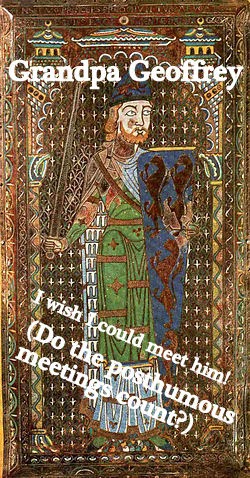 The image of Geoffrey on his tomb at Le Mans

Henry never met his paternal grandfather, Geoffrey le Bel of Anjou. The latter died in 1151, four years prior to Henry's arrival in this world. There was one occasion, however, when the two came together under most bizzare circumstances. They were both dead and buried at the time. It was shortly after Henry's untimely death in June 1183. When the young king's body was being transported by his household knights from Martel to Rouen- where it was to be buried according to the late king's wish- it allegedly became the focus for many miracles. The rumors of the late king’s sainthood began to circulate. A leprous man, and a woman suffering from hemorrhages miraculously cured by touching the bier, the lights in the sky above the monastery of St-Savin on an overnight stop, and one more “display of celestial pyrotechnics” four miles before the city of Le Mans, where “ a light was seen in the sky in the shape of a cross, and a beam of light shone down upon the bier” (Evans, Death of Kings). No wonder that when the sad retinue stopped to spend the night at Le Mans, the bishop and the great men of the city seized the opportunity to acquire the relics. That is why when the body “… was set down in the choir of the church of St Julien [they] rushed in, and with popular approval speedily buried it there” (Diceto, Images of History), next to the late king’s paternal grandfather, Geoffrey le Bel of Anjou. When the citizens of Rouen learned of those ignoble doings they fought tooth-and-nail to get the royal body back. They threatened to raze the city of Le Mans to the ground and, if necessary, carry off the body by force. Fortunately they did not have to prove that they were as good as their word. Thanks to the old king’s intervention- Henry II gave an order for the corpse to be given up- they granted Rouen its first royal burial.
Now, do the posthumous meetings count?


* In his biography of Henry's father Richard Barber writes: "The young king took Aixe on May 23. Undeterred by an excommunication issued against all disturbers of the peace by the Norman bishops on May 26 .... he continued southwards in search of booty..." (p.208). How could Henry be "undeterred" if he did not know about the excommunication? Mr. Barber apparently forgets the time medieval folk needed to carry the messages.

** In Henry Plantagenet by Richard Barber I have come across the information that Henry replaced Durendal with his own sword.

The World of Eleanor of Aquitaine. Literature and Society in Southern France between the Eleventh and  Thirteenth Centuries ed. by Marcus Bull and Catherine Leglu. The Boydell Press, 2005.

"The Hero's Invincible Weapon: an Aspect of Angevin Propaganda” by Emma Mason in The Ideals and Practice of Medieval Knighthood III, ed. Christopher Harper-Bill and Ruth Harvey, The Boydell Press, 1990.

“On the Instruction of a Prince: the Upbringing of Henry, the Young King” by Matthew Strickland in Henry II: New Interpretations. Ed. Christopher Harper-Bill and Nicholas Vincent. The Boydell Press , 2007.