Happy Wedding Anniversary to Henry the Young King's parents, Eleanor of Aquitaine (1124-1204) and Henry fitz Empress (1133-1189)! On Sunday, 18 May 1152, they were married in the cathedral of St Pierre, Poitiers, the match that was to result in forging the greatest empire of the 12th century-Europe. Henry, the eldest son of Geoffrey le Bel of Anjou and Empress Matilda, already the duke of Normandy, heir to England, Anjou and Maine, was lucky to win the greatest prize on the then marital market- the former queen of France now free to be wed again. Duke William X’s eldest daughter and heiress, Eleanor, two months earlier was divorced, her first marriage declared null and void on grounds of consanguinity. For fifteen years she had been the consort of Louis VII of France (1120-1180), but apparently displeased her husband with bearing him only two daughters, Marie (b.1145) and Alix (b.1151). By marrying Henry fitz Empress just eight weeks after her first marriage was annulled she must have shocked entire Europe and angered the other candidates eager to reach for the richest heiress of Christendom. Theobald of Blois, second son of Louis’s vassal, the count of Champagne, and Henry’s own brother, Geoffrey, were both planning to kidnap her. Fortunately their plans came to naught and three years after the Sunday wedding of 1152 our Henry was born, the couple’s second son, who went down in history as Henry the Young King. Eleanor and Henry had eight children, seven of whom reached maturity. They were: William (b.1153), Henry (b.1155), Matilda (b.1156), Richard (b.1157), Geoffrey (b.1158), Eleanor (b.1162), Joanna (b.1165) and John (b.1167). 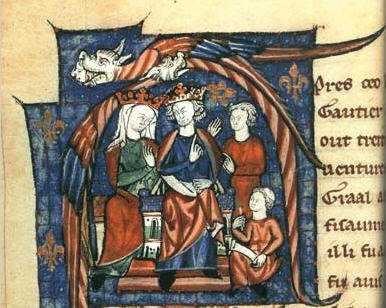