11 June 1183. Saturday. Feast day of St Barnabas the Apostle. A young man, with a sapphire ring fervently pressed to his lips, lay dying in the house of Etienne Fabri’s. He knew that only minutes shared him from being 'translated from shadows to light, from prison to kingdom, from mortality to life, from exile to fatherland’ (Peter of Blois). He also knew that he had committed many sins, both against his father and the Almighty. To repent, to make amends, to die with honour and dignity, he had a hair shirt put on him and asked to be dragged out of bed by a noose around his neck. This done, he addressed the clergymen that gathered at his deathbed: ‘By this cord I deliver myself, an unworthy, culpable, and guilty sinner, unto you, the ministers of God, beseeching that our Lord Jesus Christ, who remitted his sins to the thief when confessing upon the cross, will, through your prayers, and through his ineffable mercy, have compassion upon my most wretched soul!’(Howden). According to his wishes, he was then placed on a bed of ashes on the floor, with stones under his head and his feet, ‘in the manner which St Martin prescribed for monks’. He confessed his sins, first privately, then in public and committed his crusader’s cloak to William Marshal, asking his friend and most faithful companion to take it to the Holy Sepulchre in Jerusalem, in his stead. He also sent word to his father, begging him in the words of the twenty-fifth Psalm (verse 7), ‘do not remember the sins and offences of my youth, but remember me in thy unfailing love’. 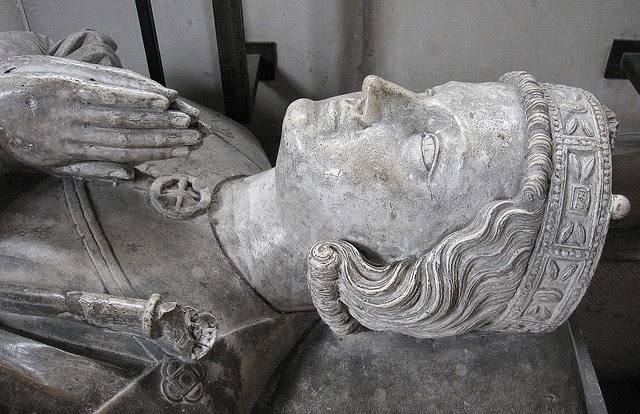 The young man was Henry, called by his contemporaries “the Young King”. The sapphire ring was a token of forgiveness sent to him by his father. The father was Henry II, king of England. The sins Henry committed? A dream to be the real king, not only in name, to have a territory of his own assigned to him, “where he, with his wife, might take up their residence”, to prove himself worthy ruler of either Normandy, or Anjou, or Maine (Howden). To achieve this Henry had no other choice but to keep sinning. When his father, the king, yet one more time flatly refused to give him a portion of land to rule over, he decided to seek a place of his own elsewhere. As it happened his brother Richard's Aquitaine was for the taking. Henry saw his chance and seized it. But to learn what befell him and his brother Geoffrey on the way you will have to wait till my next post.

Today I just want to think about the Young King, whose life was “cut off like a thread” and who died “in the flower of his youth”. Every time I try to visualize the poignant scene at Martel, the refrain of my favourite song by Mumford and Sons rings in my ears. Note: the REFRAIN (although the opening lines of the first stanza are about the Young King, too, I assume)! You listen and I will sing and make my promises :-) And please do remember the noose around the Young King's neck. Then you'll understand :-)


Note: The title of this post comes from the Chronicle of William of Newburgh. Here's the verbatim quote:

"Such an end had this turbulent youth, born for the destruction of numbers, but yet so beloved and amiable to his dependants (as it is written, "the number of the unwise is endless" [Eccles 1:13]), that even when he was dead many extraordinary things were related of him."