Dear Readers, I am sorry, but I will disappoint you. The title of this post may suggest that the discovery similar to that of uncovering Richard III's earthly remains beneath the Leicester car park has been made... Nope. Unfortunately. However, my latest Henry the Young King revelation is equally exciting, at least when I'm concerned (how could I possibly live not knowing about THIS???). And I owe it to Philip of Alsace, the count of Flanders, who was not only Henry's relative (his mother, Sibylla of Anjou, was the sister of Henry's paternal grandfather, Geoffrey le Bel), but also fellow tournament patron and chief ally in the Great Revolt of 1173-74*.

But to the point! While preparing my previous post about the June anniversaries I was looking for the images depicting Philip and came across this: 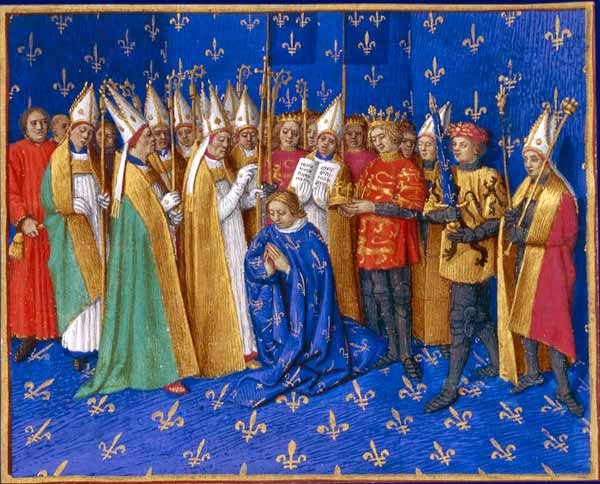 It is the 15th century manuscript illumination depicting the coronation of Philippe Auguste [Philip Augustus] on 1 November 1179. Do you remember who held the crown for him on the occasion? Who represented the absent Henry II? Who bedazzled all the present with his retinue and most precious gifts for the new king? But of course, our Henry! Just look at him! He is gorgeous, isn't he? And I am not forgetting that the image comes from Grandes Chroniques de France, created c.1455, so three centuries after Henry's death. Jean Fouquet, who painted the minature, did not know how Henry looked like, for how could he, but judging by the illumination, he must have read the chronicles' descriptions of Henry, or perhaps, the Young King's good looks were still remebered at the time. Here is my post about Philippe's coronation and the part Henry played in it.

So here it is! Henry's car park- the Wikipedia article including this beautifully painted miniature treasure (Note: the description had it wrong. It was Henry II who earned the nickname "Court-Mantel”, not his eldest son, Henry the Young King. The same mistake has been made on the plaque commemorating Henry's death on Etienne Fabri's Maison at Martel).

* No one understood Henry and his passion for tournaments better than Philip. When the news of Henry the Young King's death reached him, the count was to say:

‘Alas! How chivalry is now dead and buried, how generosity is cast aside! And that is only right, for the leading light which used to guide them on earth is extinguished. Now those who are poor young knights will have to go looking for their daily bread. There will be nobody again prepared to give them horses, arms, and money, as this man gladly gave them.’ (From the History of William Marshal).