His Pride and Joy. June Anniversaries

On 19 June 1177 the only child of Henry the Young King and Marguerite of France was born at Paris, at the court of its grandfather, Louis VII (1120-1180). It should have been an occasion for rejoicing, but instead the young parents were stricken with grief, for, according to the English sources, 'the young queen was delivered of a still-born son' (Howden). The French, however, claimed that the child lived long enough to be baptized and named William, and I assume they were right. After all the child was born in their realm. We can only speculate what course the history might have taken had baby William survived. Certainly he would have been his father's pride and joy and I believe that Henry would not have waged war against Richard in 1183. (Note: Little William's arrival and his quiet passing has been poignantly described by Ms Elizabeth Chadwick in her novel on William Marshal, The Greatest Knight).

Here are other Henry the Young King related events that took place in the month of June:

1 June 1134. Geoffrey of Nantes, the young king's paternal uncle, was born. He was the second son of Geoffrey le Bel of Anjou and Empress Matilda. His mother almost died giving birth to him and he was to cause more trouble in his adult life.

c. June 1156. Henry's elder brother, William died, aged three. Henry's sister, Matilda, was born at London. These two events and Queen Eleanor's stay in England were illustrated in the Sheriffs of London's accounts at Michaelmas. The following entry can be found there: £40 for the Queen's corrody; £24 for corrody of Henry, the king's son, his sister and his aunt; and £7 for wine; and £6. 6s. for further corrody of the same persons, supplied by hand of Ralph of Hastings (Eyton).

1 June 1175. Henry together with his father, the king, held Whitsunday court at Reading.

c.1 June 1183. Leading a military campaign against his younger brother Richard, Henry with his routiers pillaged the shrine of St Amadour at Rocamadour, carrying a rich booty and the holy sword of Roland, Durendal. He did this in order to pay off his mercenaries.

1 June 1191. Death of Philip, count of Flanders, at the siege of Acre. Philip was an important person in Henry the Young King's life. Relative and fellow patron of the tournaments, together with his younger brother Matthew [of Boulogne] they were Henry's chief allies in the Great Revolt of 1173-74. 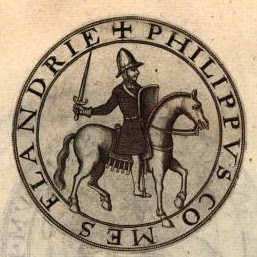 Philip of Alsace, the count of Flanders (via Wikipedia)

2 June 1162. Thomas Becket, the then chancellor and tutor of prince Henry, was ordained priest by Walter, bishop of Rochester, at Canterbury.

3 June 1162. Henry witnessed his tutor, Thomas Becket's consecration as the Archbishop of Canterbury. Henry had been placed in Becket's household sometime before or in 1162 only to be removed as a sign of his father's growing displeasure towards his former chancellor in October 1163.

3 June 1173. Richard, Prior of Dover, was elected Archbishop of Canterbury, filling the archbishopric which remained vacant since Thomas Becket's death in 1170. With Henry II Richard enjoyed better relations than Becket, but continued his predecessor's dispute with Roger de Pont l'Eveque over the primacy of England (Roger crowned our Henry king in 1170 in Becket's absence and was excommunicated for this).

5 June 1170. Prince Henry set off for the coast (probably Barfleur) from Caen to cross to England where he was to be crowned in Becket's absence. He was accompanied by Richard, Archdeacon of Poitiers (who had been sent to Caen to bring the prince) and the bishops of Bayeux and Seez. c.8 June one of Becket's partisans, named Amicus, wrote a letter to Becket, who was at Sens, informing him that the coronation was to take place on “Sunday next” and that the Pope's letters forbidding the coronation never reached the persons they were addressed to.

10 June 1128. Whitsunday. Geoffrey of Anjou [later Henry the Young King's paternal grandfather] was knighted by Henry I of England in a magnificent ceremony at Rouen.

11 June 1183. Saturday. The feast day of St Barnabas the Apostle. Death of Henry the Young King, aged twenty-eight, at Martel.

12 June 1152. Death of Henry, Earl of Huntigdon, the only surviving son of David I of Scotland and Maud, Countess of Huntigdon. Henry was the first cousin of William Adelin (d.1120) and Empress Matilda. His younger son William [the Lion] was one of Henry the Young King's chief supporters in the Great Revolt of 1173-74.

14 June 1170. Henry II had his eldest surviving son, Henry, crowned king at Westminster Abbey by Roger of Pont-l'Eveque, the Archbishop of York. Since then the prince was called the Young King in order to distinguish him from his father.

15 June 1170. A day after Henry's coronation, William I of Scotland and his brother, David [Earl of Huntigdon] did homage to the young king.

15 June 1215. Henry the Young King's youngest brother, John, the king of England, put his seal to Magna Carta in the meadow at Runnymede.

18 June 1178. Sunday. Death of Martin, Prior of Vigeois, at Limoges. On the same day Geoffrey of Breuil* succeeded to the priorate. Geoffrey's Chronicon Lemovicense was to become the main source describing Henry the Young King's death at Martel in June 1183.

24 June 1159. Henry II, at the head of the army- ‘probably the largest he ever mustered’- set off from Poitiers to regain Toulouse, which he considered his wife's rightful inheritance. He was determined to descend on the city with ‘iron, missiles, and machines’ and see it ‘either fall or yield’. His four-year-old son, Henry, was also at Poitiers and bade him “Godspeed”.

24 June 1175. Henry the Young King, his father, the king, and Richard, Archbishop of Canterbury, were at Oxford, “touching the business of the elections” (Eyton). By elections the author meant the elections to the ecclesiastical vacancies. In 1175, with the Great Revolt over, the Young King accompanied his father to England, where he was to stay more than a year. William Marshal was with him. During the meeting at Oxford William was one of the witnesses to the charter in favour of the canons of Malton.

29 June 1173. Philip, count of Flanders attacked Normandy and took the castle and town of Albemarle. Earl William of Albemarle surrendered also his other castles and was taken prisoner (Eyton). The Great Revolt began in earnest.

30 June 1159. Nineteen-year-old Malcolm IV of Scotland was knighted by Henry II in the 'Bishop's Meadow', at Perigueux, during the Toulouse campaign. With all probability Malcolm himself conferred the honour of knighthood on his younger brother, William [ the Lion], the future ally of Henry the Young King in the Great Revolt of 1173-74, the very same day.

c. 30 June 1182. The feast day of St Martial. Henry the Young King was at St Martial, Limoges, where he “was received with a procession, and he gave a pallium of silk woven with gold thread” (Itier). He might have attended mass celebrated by Theobald, abbot of Cluny. It was probably then when he met the discontented Poitevan barons, who asked him for help in waging war against their duke, Henry's younger brother, Richard [later Lionheart].

* Prior Geoffrey appears as a minor character in Devil's Brood by Sharon Kay Penman. He bravely (and in vain) tries to stop our Henry from pillaging the shrine of St Martial :-)